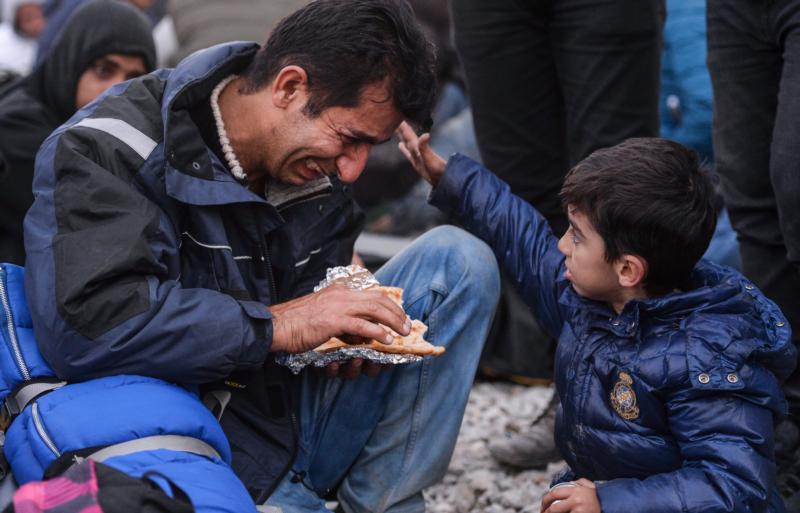 A boy touches his crying father during a Nov. 19 protest by angry migrants from Pakistan and Morocco who blocked a section of the Greece-Macedonia border after Macedonia began granting entry only to refugees from Syria, Iraq and Afghanistan. (CNS photo/Georgi Licovski, EPA)

WASHINGTON (CNS) — A Boston cardinal and the Maryland Catholic Conference were among hundreds of faith leaders who called for compassion in addressing the world refugee crisis and stressed the importance of developing a national immigration policy based on humanitarian need.

Acknowledging that the times are “dangerous” and that “enhanced security procedures are needed,” Cardinal Sean P. O’Malley in a statement Nov. 19 cautioned that in developing an immigration policy, “decisions concerning the specific measure taken require careful deliberation.”

The Maryland Catholic Conference, which includes the Baltimore and Washington archdioceses and the Diocese of Wilmington, Delaware, in a statement Nov. 18 called on the country to welcome “those feeling persecution in other countries, including refugees seeking asylum from Syria.”

The statements came as lawmakers in Congress and governors opposed measures to resettle Syrian refugees in response to a string of extremist attacks in Paris Nov. 13 that left 130 people dead and hundreds more injured.

Republicans in the House of Representatives Nov. 19 won a veto-proof majority, 289-137, on a bill blocking Syrian and Iraqi refugees from entering the U.S. The bill’s status in the Senate was uncertain, however. In addition, governors in at least 30 states have called for an end to Syrian resettlement until security concerns can be addressed.

“They investigated the call and found the person who did it and had a chat,” Spruell told Catholic News Service Nov. 20. “They took it seriously as they would with any threat like that. It was unfortunate that it happened.”

No charges were expected in the incident, Spruell said.

She added that the agency had received complaints about its resettlement efforts initially after the attacks in Paris but that by Nov. 19 “the tide really turned in that the calls of support are outnumbering the ones who were critical of our work.”

Cardinal O’Malley said that proposals that “simply exclude Syrian refugees as such lack the balance and humanitarian perspective needed at this time.” Christian and Muslim Syrians, he noted, have been fleeing their homeland for months only to be “set adrift in a chaotic world, unprepared to provide for their safety or honor their humanity.”

“The barbaric attacks in Paris, which demand a strong response and require policies that as best possible prevent recurrence, should not be used to efface the memory of Syrians and others from the Middle East and Africa who are desperately in need of shelter, support and safety,” the cardinal’s statement said.

The Maryland Catholic Conference said it was prepared to offer assistance in partnership with Catholic Relief Services to Syrian and Iraqi families fleeing oppression and brutality carried out by the Islamic State.

“We urge all Marylanders to consider their plight with an open heart, and to learn more about the multiple layers of interviews and security checks these refugees must undergo in order to resettle in our country,” the statement said.

The statement included a link — bit.ly/1kLl5gK — to documents compiled by Human Rights First and the U.S. Committee for Refugees and Immigrants detailing the procedures undertaken by the federal government before refugees are admitted.

The statements followed comments from the chairman of the U.S. bishops’ Committee on Migration, who said Nov. 17 that he was disturbed by calls from federal and state officials for an end to the resettlement of Syrian refugees in the U.S.

“These refugees are fleeing terror themselves — violence like we have witnessed in Paris,” said Seattle Auxiliary Bishop Eusebio Elizondo, committee chairman. “They are extreme vulnerable families, women and children who are fleeing for their lives. We cannot and should not blame them for the actions of a terrorist organization.”

The U.S. must remain a “welcoming home to people of all religions who are fleeing violence,” the National Advocacy Center of the Sisters of the Good Shepherd said in a statement submitted Nov. 19 to Senate and House hearings on homeland and border security.

The statement urged Congress to avoid “knee-jerk reactions that politicize” the Paris incidents and to “reject misplaced blame that crates an atmosphere of fear and to stand in solidarity with Syrian refugees who are themselves the victim of ISIS.”

“Keeping Syrian refugees out of this country based on their religion sends the wrong message to the rest of the world about who we are as Americans. We are a welcoming country with a religiously diverse society and our resettlement program should continue to reflect this. To not do so only feeds into ISIS’ propaganda and make us all less safe,” the advocacy center told lawmakers.

In another action, more than 1,000 U.S. faith leaders, including numerous Catholic women religious and several priests, rejected plans from U.S. governors who said they would block Syrians for resettlement in their states.

Citing Old Testament verses that urge faithful people to treat foreign-born immigrants as native born peoples, the leaders said in a statement Nov. 18 that protecting refugees is the responsible action for the U.S.

The sign-on statement developed by the organization Faith in Public Life also condemned “proposals to discriminate against refugees on the basis of religion.”

“The Statue of Liberty is not etched with the message ‘Christians only,'” the statement said.

“Our elected officials have a responsibility to protect the nation, but turning away families who risk their lives to escape the destruction of war is unnecessary and wrong,” the statement added. “America can prevent attacks without turning our back on desperate refugees.”

Bishop Peter A. Libasci of Manchester, New Hampshire, added his voice in asking Catholics and all people of goodwill at the local, state and federal level to be welcoming to the Syrian refugees seeking asylum.

“We can continue to be a country that resettles refugees of all faiths while continuing to ensure the safety of our nation and its citizens. We are not required to choose, and we can do both,” he said.

“Even though we as individuals cannot stop what is happening in Iraq and Syria, we can help,” Bishop Libasci added. “Through individual acts of mercy we can, in the words of (Father) Thomas Merton, ‘Leaven the mass of human misery with the charity and mercy of Christ’ and in the aggregate we can overcome evil by doing good.”

Contributing to this report was Dennis Sadowski in Washington.