Life of Father Augustus Tolton, the son of slaves, reads like a novel 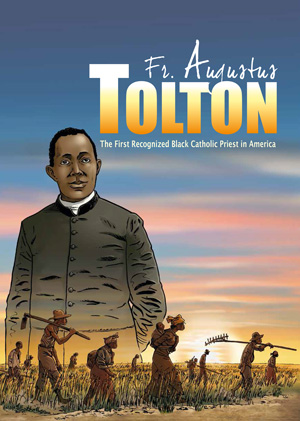 CHICAGO (CNS) — The life of Father Augustus Tolton already reads like a novel, but now it is illustrated in full color in a new graphic book produced in partnership with Liturgy Training Publications in Chicago and Editions du Signe in France.

Father Tolton’s story — that of the first identified black priest in the United States — comes to life in the 48-page, 12-by-9-inch novel aimed at helping young people and adults learn about the extraordinary life of Father Tolton, according to Claude-Bernard Costecalde, director of publications for Editions du Signe.

The publishers worked closely with the Father Augustus Tolton Guild, the official organization promoting his cause, to ensure the story’s accuracy.

Father Tolton’s life story is already a compelling read. Born into slavery, he fled with his mom and siblings through the woods of northern Missouri and across the Mississippi while being pursued by soldiers. He was only 9 years old. The small family made their home in Quincy, Illinois, a sanctuary for runaway slaves. The boy’s father died earlier in St. Louis after escaping slavery to serve in the Union Army.

Growing up in Quincy and serving at Mass, young Augustus felt a call to the priesthood but because of rampant racism no seminary in the United States will accept him. He headed to Rome, convinced he would become a missionary priest serving in Africa. However, after ordination he was sent back to his hometown to be a missionary to the community there, again facing rampant racism.

He was such a good preacher that many white Catholics filled the pews for his Masses along with black Catholics. This upset the white priests in the town so Father Tolton headed north to Chicago, at the request of Archbishop Patrick Feehan, to minister to the black Catholic community there.

Father Tolton worked tirelessly for his congregation in Chicago, to the point of exhaustion, and on July 9, 1897, he died of heat stroke while returning from a priests’ retreat. He was 43.

“He encountered mistreatment and hate with faith, hope and love. (Father) Tolton persevered even when there seemed to be no logical reason to do so; he gifted his priesthood to everyone without distinction, both while and black, and was resented for it,” writes Chicago Auxiliary Bishop Joseph N. Perry, postulator of Father Tolton’s cause, in the novel’s preface. “Through it all, he exuded an inner peace rooted in his love for Jesus, his innocence and his profound respect for the church.”

Chicago Cardinal Francis E. George introduced Father Tolton’s cause for canonization in 2011 and the priest was declared a servant of God. The archdiocesan investigation into his life and virtues was formally closed in September. All of the evidence gathered by those working on his cause were sent to Rome to be analyzed, bound into an official position paper and evaluated by theologians.

The next phase of his cause would be for him to be declared venerable if the Vatican determines he led a life of heroic virtue.

The website www.toltoncanonization.org has details about Father Tolton’s life, his sainthood cause and the graphic book. To order the book directly, visit www.ltp.org. It costs $13 each with $5 going to cause for canonization.

PREVIOUS: Some believe Keystone pipeline through country’s midsection is not dead yet

NEXT: Missouri’s 72-hour waiting period for abortion seen as ‘gift to women’