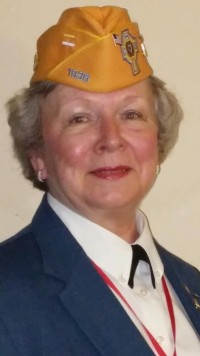 One of only a dozen or so female veterans in the 7,520-member organization, Crawford ran unopposed when she was elected at the group’s Las Vegas convention last August. She had moved up the ranks, holding numerous state and national positions, earning the respect of her male peers.

“They told me that I had earned the right to be national commander,” Crawford said in an interview.

Crawford joined what was then the Women’s Army Corps in June 1966 because her father insisted she move out of the house within two weeks of her high school graduation. Military service proved to be a good fit for her. By age 19, she was leading a platoon of women to classes and “chow” and ensuring they reported for formation at 5 a.m.

The young recruit met her future husband while she worked in the communications office at Fort Gordon, Georgia. Draftee George Crawford proposed shortly before shipping to Vietnam; the couple married upon his return. Because of Army policy at the time, Arminda Crawford later left the service when she became pregnant.

The Crawfords settled in Ohio and eventually raised seven children. They are active members of St. Paul Parish in Westerville.

For almost 18 years, Arminda Crawford has worked for Pontifical College Josephinum in Columbus, the only pontifical seminary in the world outside of Italy.

With the blessing of its administration, she founded a Catholic War Veterans post at the college. In addition to seminarians who are vets, its roster includes a retired rear admiral and other faculty members and staff who are vets.

Crawford said she hopes the seminarians will make parishioners aware of the Catholic War Veterans after they are ordained.

“Membership is the lifeline of the organization,” she said, adding that membership is its primary focus for the next two years. “Recruitment is hands-down our greatest challenge.”

To that end, Catholic War Veterans launched an aggressive membership drive during the first week of November.

Although the organization still has 233 posts nationwide, including three in Columbus, membership is declining. Older veterans die and busy younger men and women appear reluctant to join any group. All of its current national officers are veterans of the Vietnam era.

Crawford said her group fights a perception of veterans’ organizations as “good ol’ boys who just sit and drink.”

Father Edward J. Higgins, a World War I chaplain, founded Catholic War Veterans in 1935 to promote the social welfare of military veterans and their families. Membership is open to Catholic men and women who served in any branch of the service, in peacetime as well as war. Its programs reflect its motto, “For God, For Country, For Home.”

Since she joined in 1999, Crawford has been focused on good works, visiting hospitalized veterans, maintaining contact with those in nursing homes and arranging for memorial Masses. As she assumed higher positions, she widened the scope of Catholic War Veterans, including bringing together members, Boy Scouts and girls from a civic group.

On the state level, Crawford expanded an outreach to Catholic high school students, stressing the importance of service to God, country and family. In “Living History 101,” veterans of all ages share their personal experiences. Both the vets and the young people seem to benefit.

“My husband would never talk about Vietnam until he got involved,” Crawford said. These days, George Crawford easily addresses an auditorium full of teenagers.

“They are so attentive,” Arminda Crawford said. “What they are hearing they aren’t going to see in a book.”

Crawford’s oldest son is a lieutenant colonel in the Ohio National Guard and her youngest is a chief hospital corpsman in the Navy.

During their deployments to Iraq and Afghanistan, Crawford ensured her family sent them plenty of cards, letters and email. In a similar vein, she is pleased that the Josephinum’s Catholic War Veterans post plans a Christmas letter-writing campaign to men and women on active duty in the service.

During her own stint in the military, Arminda Crawford did not receive a single letter from home.

PREVIOUS: If you love God, care for what he has made, says cardinal