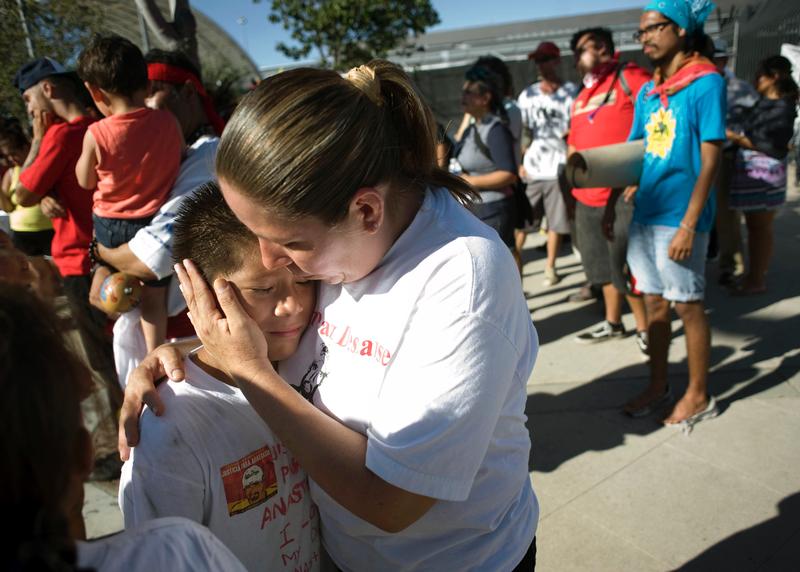 Daniel Hernandez gets a hug from his mother, Maria Puga, during an Aug. 16, 2014, rally to mark the end of the Trail for Humanity immigrant rights caravan in San Diego.(CNS photo/David Maung, EPA)

WASHINGTON (CNS) — Just because unaccompanied Central American minors are no longer crossing the U.S. border in the vast numbers they were last year doesn’t mean their problems are over.

Significant challenges exist for these young people stuck in limbo while awaiting hearings to determine their legal status in the U.S.

Speakers at a Washington immigration conference stressed that the situation has hardly improved and instead has only grown worse.

The unaccompanied minors, most often fleeing gang violence in El Salvador, Guatemala and Honduras, not only need immediate protection through temporary asylum, but they also often need help coping with trauma they have experienced, according to Jennifer Podkul, senior program officer for the Migrant Rights and Justice Program at the Women’s Refugee Commission.

Podkul, addressing the Immigration Law and Policy Conference Oct. 29 at the Georgetown University Law Center, stressed that “expedited hearings” for these minors is key and their “need for attorneys cannot be overstated.”

Reyna Torres Mendivil, Mexico’s general director for the Protection of Mexicans Abroad, echoed the plea, pointing out that migrant children temporarily housed in detention centers have been told they are not in a prison, yet they cannot go outside while their cases are reviewed.

Children not immediately deported will eventually have their cases heard in federal immigration court or they can appeal to the U.S. Citizenship and Immigration Services. Last year, the Obama administration asked to have their court cases expedited.

Some minors have sought Special Immigrant Juveniles Status, which requires them to prove they have been abused, abandoned or neglected by a parent. If a court determines a child meets any of these criteria, that child becomes a ward of the state. But unfortunately, as some of the conference panelists pointed out, many of these minors are without legal representation and they often miss their court appearances, which in turn brings on an automatic, although not immediately enforced, deportation order.

At the conference, sponsored by the Catholic Legal Immigration Network, the Migration Policy Institute and Georgetown University Law Center, Podkul and other speakers, assessing last year’s influx of 69,000 young migrants across U.S. borders, said much more needs to be done.

Although many advocates, including the Office of the U.N. High Commissioner for Refugees, have recommended that these Central American minors be described, and treated, as refugees, the federal government has simply called their plight a humanitarian crisis.

Speakers pointed out that the number of minors crossing the U.S. border has decreased from last year in part because Mexico has been apprehending more unaccompanied children at its borders and deporting them to their home countries.

When unaccompanied minors are apprehended by immigration authorities, they are placed under the care of the Office of Refugee Resettlement and provided with food, shelter and medical care until they can be released to sponsors or family members while they wait for their immigration hearings. States that have taken in the bulk of these minors include California, New York, Texas, Virginia and Maryland.

A number have also ended up in North Carolina, according to LaSalette Father Robert Ippolito, who sat in auditorium’s front row during the daylong conference.

The priest, who is pastor at St. Stephen the First Martyr Church in Sanford, North Carolina, and an immigration specialist with Catholic Charities in the Diocese of Raleigh, said many Central American youths have come to his door asking for help.

The priest came to this line of work in recent years when he was assigned to a parish where a number of parishioners were seeking U.S. citizenship. First, he learned to speak Spanish, then he took online courses and workshops in immigration law to become a certified immigration specialist in 2011.

The priest was happy to note that an 18-year-old from Honduras who asked for his help was just given his green card that week.

“It takes a long time,” he told Catholic News Service about the barrage of forms and paperwork for legal citizenship. Rephrasing his comment, he added: “It takes forever.”

“But they are nice kids,” he added, noting that so many of them were hiding from gangs before escaping. “It is worth all the effort.”