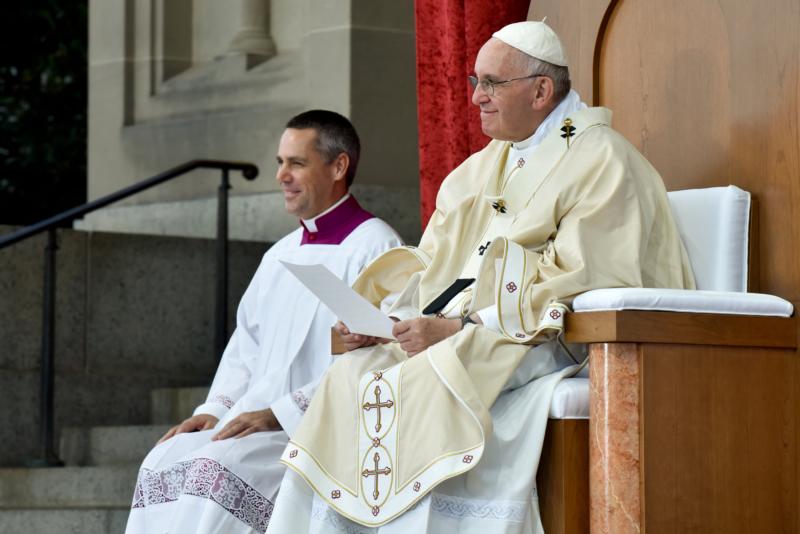 Msgr. John Cihak, a priest of the Archdiocese of Portland, Ore., sits with Pope Francis Sept. 23 during St. Junipero Serra canonization Mass in Washington. Msgr. Cihak, who grew up near Corvallis, Ore., is a papal master of ceremonies and a staffer at the Vatican's Congregation for Bishops. (CNS photo/Matthew Barrick)

PORTLAND, Ore. (CNS) — He grew up a regular kid on the outskirts of Corvallis. Now, he’s often at the pope’s right hand.

In October, he was busy with Masses during the Synod of Bishops on the family. During the pope’s September visit to Washington, New York and Philadelphia, Msgr. Cihak observed a man enjoying himself, even when weary. “The Holy Father was amazed by the warmth of people,” he reported.

Msgr. Cihak said the encounter of the pope with the people is a moment of grace.

“The papal trips help wake people up,” the priest told the Catholic Sentinel, newspaper of the Archdiocese of Portland. “The pope is not some remote figure in Rome, but he is here in front of us in a place like Madison Square Garden.”

Young John Cihak excelled at clarinet, playing for the Corvallis Youth Symphony and swam for Corvallis High School. He also sang in various rock bands with his brothers. After graduating in 1988, he went to the University of Notre Dame to begin pre-med studies. Discerning a call to the priesthood, he switched his major to philosophy and spent time volunteering at a hospice. The summer after his graduation from Notre Dame, he worked in a gang prevention program for youth in South Central Los Angeles in the aftermath of the Rodney King riots.

He was accepted as a seminarian for the Archdiocese of Portland in 1992 and studied for a year at Mount Angel Seminary. Then-Archbishop William J. Levada sent him to continue his studies at the Pontifical Gregorian University and the Pontifical North American College. He met St. John Paul II six times and Blessed Teresa of Kolkata twice. He spent a summer working with Blessed Teresa’s Missionaries of Charity in poverty-stricken Albania.

Ordained by Archbishop John G. Vlazny in 1998, he was parochial vicar at four parishes, director of human formation and a professor of theology at Mount Angel Seminary. After finishing doctoral studies in 2007, he was named pastor of Sacred Heart-St. Louis Parish in Gervais.

In 2009, he came onto the Vatican radar. He was invited to go to Rome to work at the Vatican Congregation for Bishops. Not long after, he was nominated for additional duty as one of Pope Benedict XVI’s masters of ceremonies — priests who make sure papal liturgies run smoothly.

When a native English speaker is needed, as during Pope Francis’ recent trip to the U.S., Msgr. Cihak often gets the call.

He has accompanied Pope Francis to Korea and Sri Lanka and once flew with Pope Benedict in a helicopter to the Shrine of Our Lady of Loreto on the Adriatic Sea.

Vatican assignments are open-ended. But most Americans stay five to 10 years.

Msgr. Cihak’s work at the congregation is a steady 9-to-5 job. As a papal master of ceremonies, he also is assigned to help about 25 cardinals with their liturgical celebrations when they happen to be in Rome, and he teaches a theological seminar at his alma mater, the Gregorian. He rises early, prays, says Mass and goes to work — whether in a Vatican office, a Roman church or a far-flung place.

Msgr. Cihak said both popes he has served are exceedingly kind men. Pope Francis sometimes teases the monsignor in a good-natured way in the sacristy. Pope Benedict would always take in stride things that would inevitably go awry in liturgical planning; he would say: “Let’s proceed. The Lord will help us.”

“The master of ceremonies makes sure the liturgy is executed well and prayerfully and correctly,” Msgr. Cihak explained. The group of master of ceremonies splits up jobs for a big Mass, working with lectors, servers, deacons and concelebrants. One assists the pope. The men rotate jobs, so as not to fall into a rut.

Each papal liturgy has two rehearsals, one the day before and one a couple of hours before. Things usually go well, but a good master of ceremonies needs to be flexible and graceful in the face of blunders.

“All sorts of things can go sideways,” said Msgr. Cihak.

The most important job is setting a prayerful tone. Msgr. Cihak credited his advancement in this area to Msgr. Guido Marini, the slim and bespectacled papal master of liturgical ceremonies since 2007.

Msgr. Cihak has learned to remember that the primary protagonist of the liturgy is certainly not him and not even the pope, but the Holy Trinity.

Though he does yearn to be a parish priest again in Oregon, he likes his assignment. And being a papal emcee is a way to evangelize. Former classmates and friends from Corvallis High, even if they have never been to church, have sent him emails and Facebook messages saying they saw him.

“I hope it draws them to the Holy Father and to Jesus Christ,” Msgr. Cihak said, “and that the church is not as far away as they think.”

Msgr. Cihak is one of about 20 priests on staff at the Congregation for Bishops, which is led by Canadian Cardinal Marc Ouellet. Msgr. Cihak works in section that serves the English-speaking world.

Msgr. Cihak was in Oregon for the Oct. 24 ordination of permanent deacons. Among the new deacons is his father, Michael Cihak, a member of St. Mary Parish in Corvallis.

Father Theodore Lange, on staff at Mount Angel Seminary, teamed up with Msgr. Cihak and other priests of the Portland Archdiocese to begin a summer camp for boys to foster vocations.

Father Lange said Msgr. Cihak has so opened his heart to Jesus Christ that he’s able to give strength to all kinds of people — men discerning priesthood, families, seminarians and brother priests.

“Msgr. Cihak lives for Jesus and the church,” Father Lange said. “He is a witness of offering our gifts in obedient, humble, and loving service to what the Lord asks.”

PREVIOUS: Religious freedom said to merit ‘seat at the table’ with other concerns

NEXT: Researcher finds something deep, life-changing within nuns’ cloister