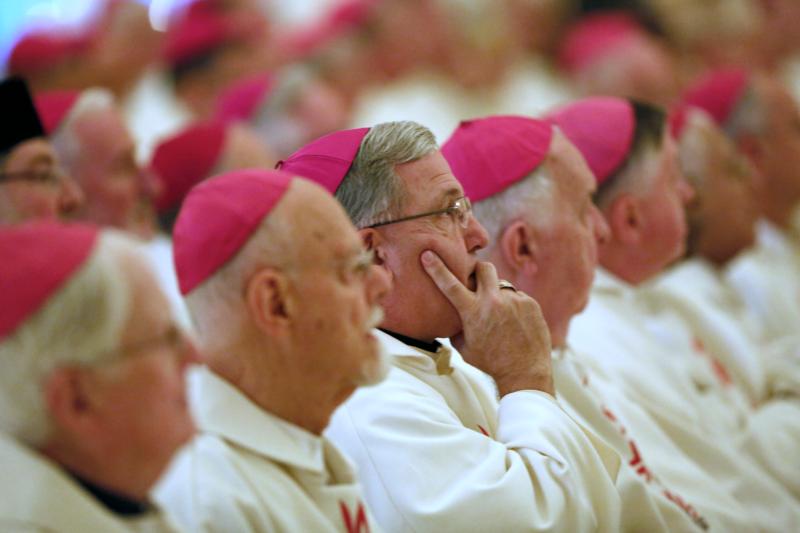 U.S. bishops are seen before celebrating Mass at the Basilica of the National Shrine of the Assumption of the Blessed Virgin Mary Nov. 16 during the 2015 fall general assembly of the U.S. Conference of Catholic Bishops in Baltimore. (CNS photo/Bob Roller)

BALTIMORE (CNS) — At the opening Mass for the annual fall assembly of the U.S. Conference of Catholic Bishops, the USCCB president urged his brother bishops to pray for virtues that would help them be better spiritual leaders.

“Lord, give us an understanding heart and a credible moral voice,” said Archbishop Joseph E. Kurtz of Louisville, Kentucky, in his homily at the Nov. 16 Mass at the Basilica of the National Shrine of the Assumption of the Blessed Virgin Mary in Baltimore.

He also urged the bishops to pray for the “eyesight to see as Jesus sees” and for the renewed grace to love God and serve others.

“Help us steer straight,” he added, referring to how good administrators have the ability to steer their ships through rough waters.

Archbishop Kurtz acknowledged that he and the other bishops face myriad daily pressures and decisions. In the midst of such demands, he said, the bishops should pray for the grace to do their jobs with the ability to “remain faithful in the midst of cultural challenges” and also to “see the voiceless and the vulnerable in our midst.”

The Mass was celebrated at the close of the first day of the bishops’ fall general assembly. The bishops filled the front section of the historic basilica, which was dedicated in 1821.

In remarks at the beginning of Mass, Baltimore Archbishop William E. Lori welcomed his fellow bishops and pointed out that they were at the basilica a couple of weeks before the 200th anniversary of the death of the nation’s first bishop, Archbishop John Carroll, who is entombed in the basilica’s crypt. Archbishop Carroll died Dec. 3, 1815.

He also pointed out, as had been mentioned at the bishops’ meeting, that they were assembled just days after the attacks in Paris.

Archbishop Lori expressed hope their prayers, in solidarity with those in Paris, would “be a source of comfort and healing.”