A family that doesn’t eat together is ‘hardly a family,’ pope says 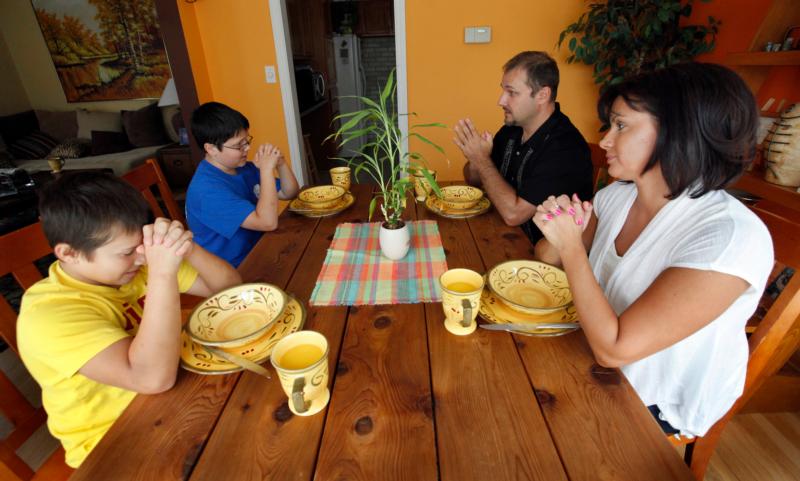 A family prays together before a meal in 2012 at their Chicago home. A family that chooses to watch TV or play with their smartphones rather than talk at the dinner table is "hardly a family," Pope Francis said. (CNS photo/Karen Callaway, Catholic New World)

VATICAN CITY (CNS) — A family that chooses to watch TV or play with their smartphones rather than talk at the dinner table is “hardly a family,” Pope Francis said.

“When children at the dinner table are glued to the computer, or the telephone and do not listen to one another, they are not a family, they are retired,” the pope said Nov. 11 during his weekly general audience.

Continuing his catechetical series on family life, the pope reflected on the theme of togetherness, which is manifested at the dinner table. The pope said that “to share a meal — and not just food, but also affection, stories, events — is a fundamental experience.”

The pope said Christians have a special vocation to foster family togetherness. The dinner table, he noted, is the place chosen by Jesus to teach his disciples and where he summarized the meaning of his death on the cross “that nourishes true and everlasting love.”

For this reason, the family feels “at home” at the celebration of the Eucharist where they bring their “experience of togetherness and open it to the grace of a universal coexistence, of the love of God for the world,” he said.

“Through the participation in the Eucharist, the family is purified of the temptation to be closed in on itself; it is strengthened in love and fidelity, and stretches the boundaries of brotherhood according to the heart of Christ,” the pope said. “There are no little ones, orphans, weak ones, defenseless, wounded and disillusioned, desperate and abandoned ones that the eucharistic togetherness of the family can’t nourish, refresh, protect and care.”

However, the pope said that there are obstacles to family togetherness and Christians are called to overcome them. At the dinner table, he said, families speak and listen, but “there can’t be any silence that is not the silence of monks but of selfishness, of the cellphone, of the television.”

People in wealthier countries, in particular, are enticed to spend money on excessive amounts of food that ultimately distract from the “true hunger of the body and the soul,” he said.

“When there is no togetherness, there is selfishness and each one thinks of him- or herself,” the pope said. Advertisements have picked up on the loss of animated family meals and instead offer “a listlessness of snacks and hankering for sweets while so many of our brothers and sisters remain far from the table. What a shame!”

Pope Francis called on families to contemplate the mystery of the Eucharist in which “Christ breaks his body and shares his blood for all. There is no division that can resist this sacrifice of communion.”

Christian families who embrace this calling of togetherness, “cooperate with the grace of the Eucharist, which has the power to create an always new communion that includes and saves,” he said.

PREVIOUS: To help people, church must be in touch with ‘reality,’ pope says