To help people, church must be in touch with ‘reality,’ pope says 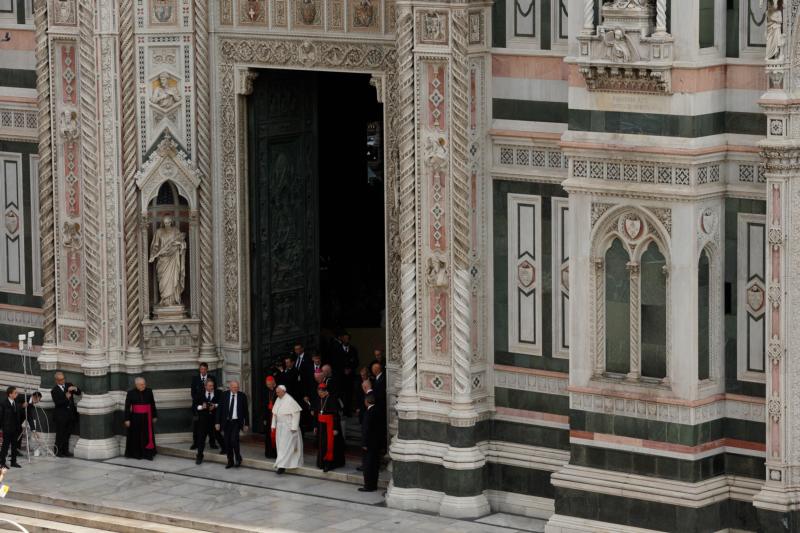 Pope Francis leaves the Duomo, the Cathedral of Santa Maria del Fiore, in Florence, Italy, Nov. 10. Pope Francis attended a meeting of Italy's bishops and cardinals in the Duomo during a one-day visit to Florence Nov. 10. The pope also met young people and was to celebrate Mass at a soccer stadium. (CNS photo/Paul Haring)

FLORENCE, Italy (CNS) — If God and his word are to help people, Christians have to be in touch with what is really happening in people’s lives, Pope Francis said during an afternoon Mass.

God became human to live among people, to hear their problems, “not to indulge them, but to be able to communicate with them,” he said in his homily Nov. 10 in Florence.

Christians must have “healthy contact with reality, with what people are going through, with their tears and joys — it is the only way to be able to help, form and communicate with them,” the pope said.

“Without knowing what people think, the disciple is isolated and starts to judge people according to his own thoughts and beliefs,” the pope said at the end of a full day visiting workers and young people in an industrial town, as well as the sick, the homeless and church leaders from all over Italy attending a national congress in Florence.

The only way to speak to people’s hearts and help them listen to God is by acknowledging their daily ups and downs, their jobs, families, health issues and problems with commuting, with school and health care, he said.

Christ’s disciples must never forget that they, too, were chosen from among the masses, the pope said. “They must never fall into the temptation of taking on an attitude of detachment, as if what people think and experience doesn’t matter or isn’t important to them.”

Noting that the Mass was celebrated in a large outdoor stadium, the pope said that “the church, like Jesus, lives in the midst of people and for the people.” The stadium, holding at least 40,000 people, was full, and large video screens dotted other parts of the city for the over-capacity crowds.

Christians today, like in the past, must “go against the tide” and overcome mistaken views that can’t see that Jesus is more than just a prophet or teacher, but is the son of the living God, the pope said.

This is a Christian’s joy: that God is ever present, always at hand offering salvation, and that he never wants to give up on people despite their lack of understanding, sins and problems, Pope Francis said.

God’s greatness meets human weakness, which is not only the hope that keeps the faithful going, it is the “gentle power” that attracts people to God, he said. It is the start of planting seeds of goodness every day, bit by bit, to build “a new, renewed humanity, where no one is left at the margins or thrown away, where the one who serves is the greatest, where the least and the poor are welcomed and helped.”

God and the human person are not two distant extremes, the pope said. They are constantly seeking and recognizing each other, especially when people imitate the good Samaritan.

Earlier in the day, the pope prayed the Angelus privately with a group of sick people and then had lunch with dozens of the poor and homeless, many of them from other countries.

The pope “checked-in” like the other guests at the local Caritas cafeteria and then he greeted each and every one of them personally. One man kissed the pope’s feet, another gave him a homemade wool hat, which the pope tried on, and a woman gifted him a flowering plant.

They ate a Tuscan specialty soup made out of bread and tomatoes; beef; mashed potatoes; and dessert, according to the archdiocese.

NEXT: A family that doesn’t eat together is ‘hardly a family,’ pope says