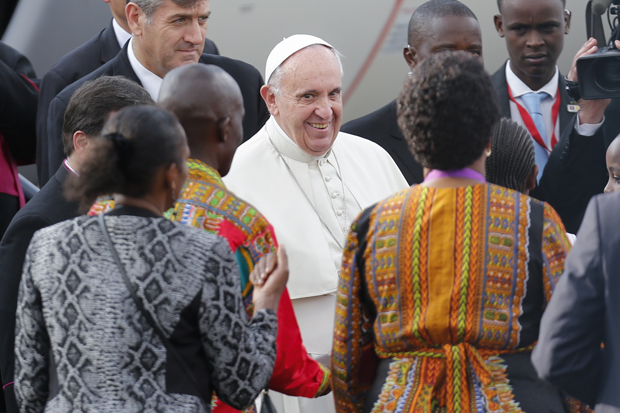 During the less than seven-hour flight, Pope Francis told reporters the only thing he was worried about were the mosquitoes, and after greeting each of the 74 reporters individually the pope took the microphone again and said, “Protect yourselves from the mosquitoes!”

Speaking to a small group of reporters as he made his way around the plane, the pope also confirmed he would visit four cities, including Ciudad Juarez on the U.S.-Mexican border, when he visits Mexico in February.

In his brief remarks to the whole group, the pope did not mention the security concerns or the travel advisories issued by many governments after the terrorist attacks Nov. 13 in Paris.

Pope Francis was greeted at Nairobi’s Jomo Kenyatta International Airport by a small group of dancers, women ululating and President Uhuru Kenyatta, son of the nation’s first president, for whom the airport is named. After the brief arrival ceremony Pope Francis traveled past hundreds of offices and factories where employees came out and lined the road to greet him.

The formal welcoming ceremony took place at Kenya’s State House, where the pope met with the president, government and civic leaders and members of the diplomatic corps.

In his speech, the pope focused on the values needed to consolidate democracy in Kenya and throughout Africa, starting with building trust and cohesion among members of the different ethnic and religious groups on the continent.

“Experience shows that violence, conflict and terrorism feed on fear, mistrust and the despair born of poverty and frustration,” he said. “To the extent that our societies experience divisions — whether ethnic, religious or economic — all men and women of good will are called to work for reconciliation and peace, forgiveness and healing.”

Kenyatta told the pope that colonization left Africa with artificial borders dividing communities, which has created tensions, but war and violence on the continent also has been fueled by “our own selfish politicization of our ethnic and religious identities.”

As the U.N. Climate Conference was about to begin in Paris, Pope Francis also spoke of the traditional African value of safeguarding creation and of the need to find “responsible models of economic development” that will not destroy the earth and the future.

“Kenya has been blessed not only with immense beauty in its mountains, rivers and lakes, its forests, savannahs and semi-deserts, but also by an abundance of natural resources,” the pope said.

Kenyans recognize them as gifts of God and have a “culture of conservation,” which they are called to help others embrace as well, the pope said.

“The grave environmental crisis facing our world demands an ever greater sensitivity to the relationship between human beings and nature,” he said. “We have a responsibility to pass on the beauty of nature in its integrity to future generations, and an obligation to exercise a just stewardship of the gifts we have received.”

On a continent where the population is predominantly young, but unemployment among young adults is high, Pope Francis also urged the Kenyan government officials and representatives of other countries to recognize that the young, too, are a gift from God to be assisted with care.

“To protect them, to invest in them and to offer them a helping hand is the best way we can ensure a future worthy of the wisdom and spiritual values dear to their elders, values which are the very heart and soul of a people,” the pope said.

Knowing that he was speaking in front of the country’s political and economic leaders, Pope Francis reminded them that the Gospel insists that “from those to whom much has been given, much will be demanded.”

“Show genuine concern for the needs of the poor, the aspirations of the young and a just distribution of the natural and human resources with which the Creator has blessed your country,” he told them. 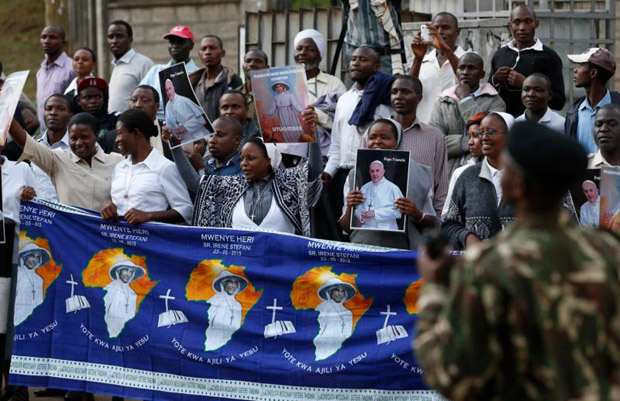 People along a street cheer Pope Francis’ arrival in Nairobi, Kenya, Nov. 25. The pope is beginning a six-day visit to Africa with stops also in Uganda and the Central African Republic. (CNS photo/Paul Haring)

NEXT: Refugees headed to U.S. are fully vetted, official says