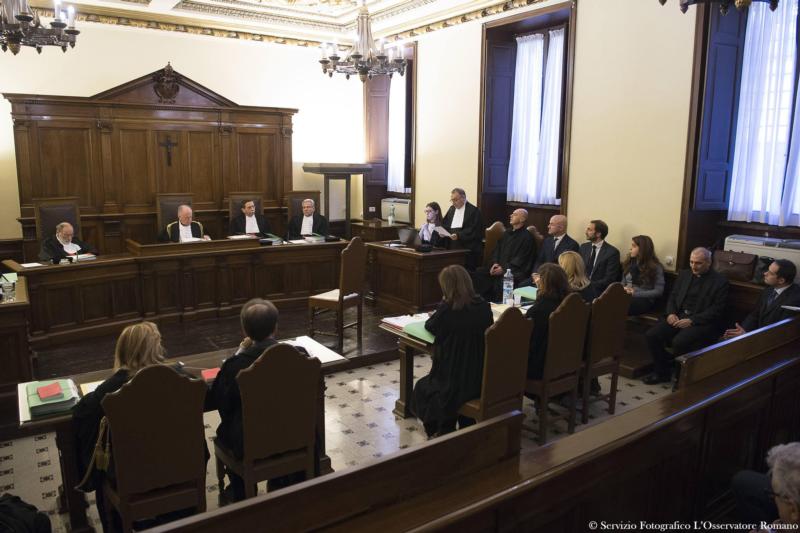 VATICAN CITY (CNS) — Italian journalists standing trial in a Vatican court defended their right to freedom of the press, while the Vatican prosecution said the way they acquired confidential information was illegal.

All five people accused of involvement in leaking and publishing confidential documents about Vatican finances were present at the opening of the criminal trial in a Vatican courtroom Nov. 24.

The accused are: Spanish Msgr. Lucio Angel Vallejo Balda, secretary of the Prefecture for the Economic Affairs of the Holy See; Francesca Chaouqui, a member of the former Pontifical Commission for Reference on the Organization of the Economic-Administrative Structure of the Holy See; Nicola Maio, who served as personal assistant to Msgr. Vallejo Balda when he worked on the commission; and the journalists, Gianluigi Nuzzi, author of “Merchants in the Temple,” and Emiliano Fittipaldi, author of “Avarice.”

The Vatican court granted Fittipaldi’s request to address the courtroom at the trial’s opening session. He expressed his “disbelief” at finding himself being tried by a non-Italian court system when he wrote and published a book in Italy.

He said the charges against him were not “for publishing false or defamatory news, but simply for publishing news, an act protected by the Italian Constitution,” as well as European and universal human rights conventions.

Article 10 of the Vatican criminal code states that whoever “illegitimately obtains or reveals news or documents” that are confidential can face a fine between 1,000 and 5,000 euros and possible imprisonment from six months to two years. Classified information dealing with diplomatic relations or “fundamental interests” of the Holy See or Vatican City State carry more severe penalties, including a maximum eight-year prison sentence.

The Vatican criminalized the release of “news and documents” in July 2013. The move came in the wake of the first so-called “VatiLeaks” trial in 2012 when Pope Benedict XVI’s butler was charged with “aggravated theft” for giving Vatican documents and papal correspondence to Nuzzi.

The updated criminal laws were approved by Pope Francis.

At the first session of the trial, Emanuela Bellardini, Msgr. Vallejo Balda’s court-appointed attorney, objected that there was not enough time to examine and prepare a proper defense.

Fittipaldi and his Vatican-appointed defense lawyer argued that the court summons did not specify the documents he stands accused of releasing and therefore makes his defense impossible.

The Vatican’s assistant prosecutor, Roberto Zannotti, responded to Fittipaldi’s objection, arguing that the trial is not meant to infringe on freedom of the press and is not about the publication of documents, but that he was to “be held accountable” for the illegal way he allegedly obtained the documents published in his book “Avarice.”

Nuzzi told the pool reporters present in the courtroom, “We are not martyrs, we are journalists,” who were just doing their job and that certain principles needed to be upheld.

Giuseppe Dalla Torre, head of the tribunal for the Vatican City State, along with three Vatican judges deliberated about the introductory motions privately for 45 minutes. The judges overruled Fittipaldi and Bellardini’s objections and scheduled the next trial date for Nov. 30.

The Vatican judges said Msgr. Vallejo Balda would be the first to take the stand, followed by Chaouqui and the other defendants over the course of a week.

NEXT: Arriving in Kenya, pope says tolerance, respect are keys to peace