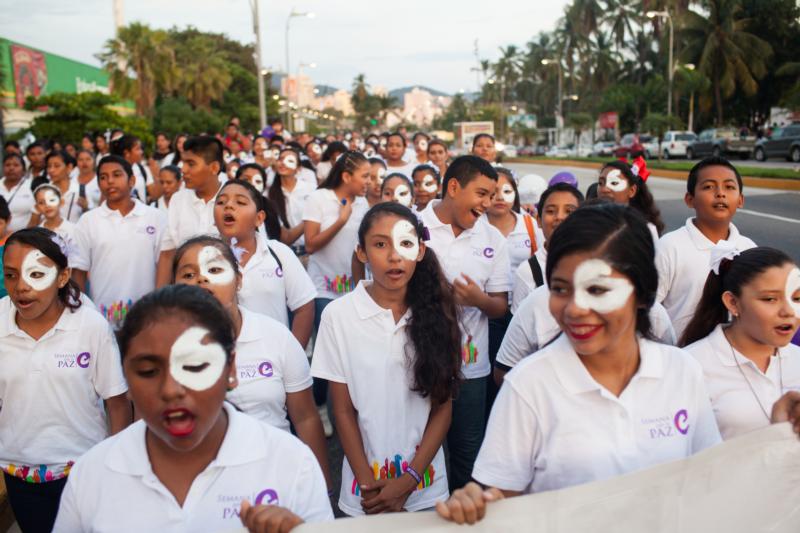 Young people take part in a walk for peace in Acapulco, Mexico, Nov. 19, during a church-sponsored event to call for an end to gang violence. (CNS photo/Brett Gundlock)

ACAPULCO, Mexico (CNS) — Father Adolfo Silva Pita celebrates a monthly memorial Mass for the deceased in a lower-middle-class neighborhood on the outskirts of this tourist town, once famous for sun, fun and celebrities, but notorious now for drugs, crime and killings.

Father Silva, pastor of Our Lady of Fatima Parish in a working-class neighborhood, said the Mass imparts “a message of comfort, hope and peace” for families who have lost loved ones, often in violent acts. The families also ask for individual memorial Masses, he said, “but there’s a list of more than 400 names.”

Such is the seriousness of the security situation in many of the Acapulco’s working-class barrios, far from the well-protected tourist strip. Extortion and kidnap can be common. Acapulco recorded 29 murders in a four-day period earlier in November, while at least 50 schools closed due to security concerns.

The city reflects the wider security concerns in the state of Guerrero, which includes Acapulco. The state is known for the kidnapping and presumed killing of 43 teacher trainees in 2014 and is making headlines again for slayings and shootings, including 12 dead after gunmen burst into a clandestine cockfighting ring earlier in November.

Bishops in Guerrero responded to the insecurity and to the inauguration of a new governor with a Nov. 1 pastoral letter calling for dialogue and prioritizing attention to victims of violence. Archbishop Carlos Garfias Merlo told reporters Nov. 3 that the dialogue and attention should include the victimizers, not just the victims.

“Words are a privileged instrument for the authorities to engage citizens, and the citizenry includes those who are criminals as well,” he said.

“At some point, it’s going to be necessary,” Archbishop Garfias told Catholic News Service Nov. 19, when asked about his earlier comments. “If those who offend seek out the authorities, we have to attend to them. We can’t say, ‘We’re not going to attend to them because they’re bad.'”

The idea is not without critics — a deal between gangs in El Salvador, brokered in part by a Catholic bishop, proved controversial and did not last. The inclusiveness strategy is reflective of the advice provided by Colombian priests, who have been brought in to share perspectives on their own difficulties, which include fomenting dialogue with those on the wrong side of the law.

“I’m all for dialogue, but only if the other side has a legitimate cause or grievance,” said Jorge Kawas, a Mexican security analyst. “Talking to armed militias is one thing, but talking to criminal groups that have no real political agenda and have instead undertaken violent crimes as a way of living will only legitimize their actions, delegitimize the government.”

The strategy also reflects the priorities of the Archdiocese of Acapulco, which has focused on providing attention to victims of violence since Archbishop Garfias arrived five years ago. The archdiocese exemplifies going to the periphery, a concept often preached by Pope Francis, who is expected to arrive in Mexico Feb. 12.

The archdiocese organized a week of activities promoting peace, which included a seminar, marches and Mass celebrations. It also attempted to raise awareness of attending to victims of violence, especially by government officials, who often do not open investigations. Critics say government actions cause many victims to suffer in silence instead of denouncing the crimes committed against them.

“It’s very important that the authorities, at the local and state levels, are close by and offer services to victims,” Archbishop Garfias said. “The authorities need to gain credibility and trust from the society. One of the ways to do that is by providing attention to victims of violence.”

The programs established by the archdiocese include reaching out to young people, including those likely to be recruited into gangs. Psychological services are offered, along with pastoral attention, although participation in the programs is open to anyone.

Jacqueline Perez, a parish participant, joining a march for peace, said volunteers seek out young people and invite them into organized activities. The activities offer promising results, until the young people head home.

“Young people need help from their parents,” who are often absent due to work, she said. “We don’t see them after they leave.”

Father Silva said something similar happened away from the tourist strip, in the barrios — where armies of maids, waiters and drivers reside far from the sight of visitors — as young people were left unattended by parents working long hours.

“About seven to 10 years ago, (Acapulco) turned into a place where young people started participating in bad things, in narcotics trafficking, kidnapping gangs,” he said. “They’re now dead because the young people getting into those things last on average two years, then they’re killed.”

“The new generation,” Father Silva added, “has the same temptation of easy money.”

Priests in the peace promotion program say it is spreading to other parts of Mexico, serving as a sort of template for dioceses in troubled corners of the country to replicate.

Many of the programs go beyond the religious. Father Silva said the nongovernmental group Doctors Without Borders set up in the parish as it fought dengue fever in Acapulco.

“They noticed in the neighborhood that there was another emergency: People were terrorized, with anxiety and psychological problems,” he said, adding the group hired eight psychologists and offers at least 300 appointments per month.

“It’s a big help because the government isn’t doing anything, and the church doesn’t have any resources, but fortunately, with the funds we receive, we can carry out this work,” he said of the peace promotion campaign.

PREVIOUS: Priests must not forget their roots, pope says

NEXT: Proclaim the Gospel, not the institution, pope says