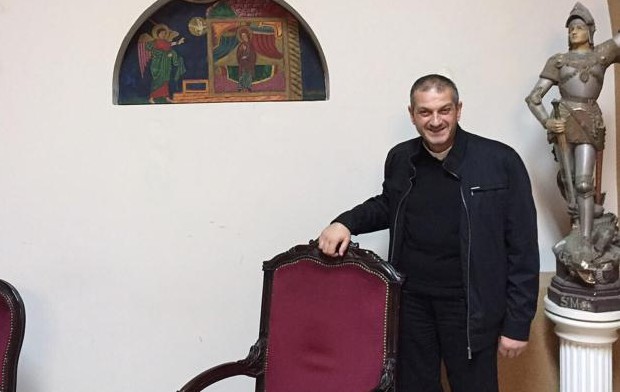 Father Jacques Mourad poses for a photo Nov. 11 in the reception area at Our Lady of the Annunciation Church in Beirut, Lebanon. (CNS photo/Doreen Abi Raad)

BEIRUT (CNS) — When a man dressed head-to-toe in black entered the room where Father Jacques Mourad was being held by the Islamic State, the Syriac Catholic priest thought his time to become a martyr had come.

“That moment was really intense and difficult,” he recalled.

It was eight days after Father Mourad’s May abduction by Islamic State from Qaryatain, Syria, where he served as prior of the ancient Syriac Catholic Mar Elian monastery. The militants also kidnapped Boutros, a deacon. Together they spent 84 days in captivity.

To the two prisoners’ surprise, their would-be executioner did not treat them as though they were “infidels” (Christians), who are considered as impure and beneath fanatic Muslims: The man in black shook their hands, greeted them with “salam alaykoum” (peace be with you) and asked questions as if he would like to get acquainted.

When Father Mourad asked, “Why are we here?” the masked man told the priest to consider it as a “khaelwe,” which in Arabic means a time of spiritual reflection, a spiritual retreat.

“I needed this concept of a ‘spiritual retreat,'” the priest told Catholic News Service while visiting Lebanon Nov. 11, a month after his escape. “I felt that the Lord was speaking through this masked Muslim. It gave me a push to keep going.”

Instead of the dreaded death sentence, the encounter turned out to be a turning point for Father Mourad. From that day, the priest said, his prayers had a whole new meaning, and he began to see his imprisonment as a way to carry and embrace the cross of Jesus.

In the 19-by-10-foot bathroom that served as their prison cell, Father Mourad and Boutros spent most of their time praying together.

“The prayer that really helped us, that was a source of strength, was the rosary,” the priest said. He added that they also relied on Scripture.

“I used to remember the verse from Matthew: ‘But I say to you, love your enemies and pray for those who persecute you.'”

As far as the two Christians knew, they were the only prisoners. From behind the locked bathroom door, sometimes they could hear the muffled voices of their captors, or their footsteps. Otherwise, they were completely cut off from the outside world.

There was no electricity in their cell. Daylight entered through a tiny window near the ceiling. Nights were dark, long and especially difficult, Father Mourad recalled. The two prisoners were given rice and water twice daily. Tea was added to that ration three times during their captivity.

Periodically, Father Mourad and Boutros were threatened with the ultimatum, “Either you become Muslim, or we cut your head off.”

One time Father Mourad was beaten. He distinctly remembers that it was on the 23rd day of imprisonment. Nothing in particular provoked the punishment, which was carried out with a plastic hose, functioning as a whip.

“It really hurts,” the priest calmly recalled of the scourging, which he said lasted about half an hour. “They thought maybe I would succumb and agree to become a Muslim.”

Yet Father Mourad said Boutros “was suffering because he was watching me.” Every so often, the priest said, he would turn his head and smile at Boutros to console him.

“Personally, despite the pain, I lived this half hour in peace,” the priest said. “I felt privileged that I was participating in Jesus’ suffering. But at the same time, I considered myself unworthy of it.”

Clever tricks of manipulation were also used, the priest told CNS. The day after the beating, one of the captors apologized for his colleague who carried out the assault on the priest.

“It’s like a psychological game,” Father Mourad explained. “They scourge you, and then they apologize, as if they want to show that Islam is merciful.”

He said he responded, “Don’t worry, I had already forgiven him.”

On Aug. 4, Islamic State captured and demolished Mar Elian monastery, where Father Mourad had served for 15 years. Aside from the extensive archaeological excavation and renovations he oversaw, the priest promoted dialogue and coexistence between Christians and Muslims.

“For many years he built bridges between the religions. This has now proved its value in the war,” Father Jihad Youssef, a fellow Syriac Catholic, told the Catholic charity Aid to the Church in Need after Father Mourad’s abduction.

Father Mourad also had been sheltering Christian and Muslim refugees at the monastery.

When asked by Catholic News Service how he sees his mission for the future, the priest shrugged his shoulders and responded: “After this happened to me, I have a bigger responsibility now, with Christian-Muslim dialogue. We can’t play with God’s will.”

PREVIOUS: Tear down this wall: Holy Year calls for human barriers to tumble down