Tear down this wall: Holy Year calls for human barriers to tumble down 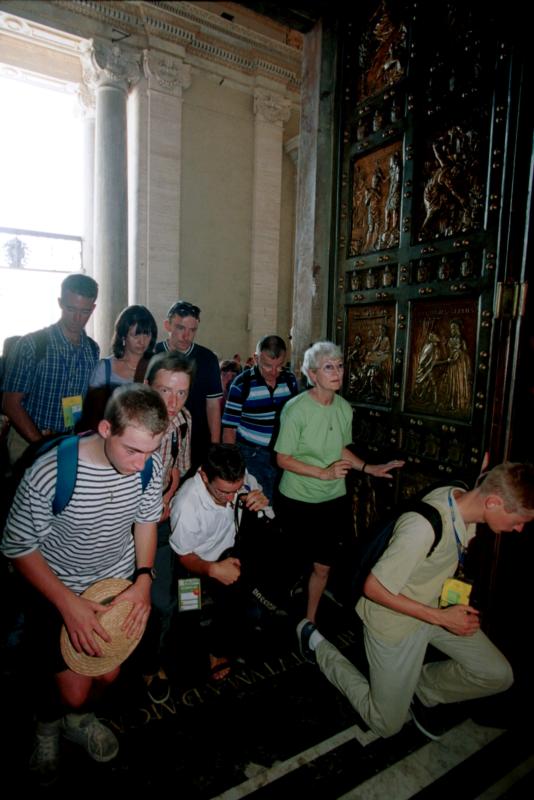 VATICAN CITY (CNS) — For a spiritual leader who denounces a world divided by walls, a church shuttered by cliques and hearts hardened to compassion, opening wide the Holy Door for the Year of Mercy will be a significant and symbolic moment for Pope Francis.

In Catholic tradition, the Holy Door represents the passage to salvation — the path to a new and eternal life, which was opened to humanity by Jesus.

It also symbolizes an entryway to God’s mercy — the ultimate and supreme act by which he comes to meet people. Mercy is “the bridge that connects God and humanity, opening our hearts to the hope of being loved forever despite our sinfulness,” the pope wrote in “Misericordiae Vultus” (“The Face of Mercy”), instituting the Holy Year of Mercy.

Doors have always had a special meaning for the Catholic Church, according to the late-Cardinal Virgilio Noe, the former archpriest of St. Peter’s Basilica.

“The door of a church marks the divide between the sacred and profane, separating the church’s interior from the outside world. It is the boundary defining welcome and exclusion,” he wrote in the book, “The Holy Door in St. Peter’s” in 1999.

The door is also a symbol of Mary — the mother, the dwelling of the Lord — and she, too, always has open arms and is ready to welcome the children of God home. Pope Francis was scheduled to open the door Dec. 8, the feast of Mary’s immaculate conception.

But the door especially represents Christ himself — the one and only way to eternal life. As Jesus said, according to the Gospel of John (10:9), “I am the gate. Whoever enters through me will be saved, and will come in and go out and find pasture.”

The Holy Year traditionally begins with the opening of the Holy Door to represent a renewed opportunity to encounter or grow closer to Jesus, who calls everyone to redemption.

Jesus knocks on everyone’s door; he yearns to accompany and nourish everyone. “If anyone hears my voice and opens the door, then I will enter his house and dine with him, and he with me,” the Book of Revelation quotes him as saying.

But doors are also narrow, Cardinal Noe wrote, and people must stoop with humility and “be brought down to size by conversion” in order to be “fit” for eternal life.

That is why passing through a Holy Door is part of a longer process of sacrifice and conversion required for receiving an indulgence granted during a Holy Year. A plenary indulgence, the remission of temporal punishment due to sin, is offered for pilgrims who also fulfill certain other conditions: reception of the sacraments of penance and the Eucharist, visits and prayers for the intention of the pope and performing simple acts such as visiting the sick.

This spiritual process of encounter and conversion is made tangible in the elaborate rituals developed over time for the opening of the Holy Door.

The symbolic ceremony of opening a Holy Door came more than a century after the first Holy Year was proclaimed in 1300.

Pope Martin V, in 1423, opened the Holy Door in the Basilica of St. John Lateran for the first time for a jubilee. Next, Pope Alexander VI called for all four Holy Doors in Rome to be opened at Christmas in 1499 for the Jubilee of 1500.

Starting in the 16th century, the ceremony to open the door in St. Peter’s Basilica included the pope reciting verses from the Psalms and striking the wall covering the Holy Door with a silver hammer three times.

Masons completed the task of dismantling the brick and mortared wall, which represents the difficulty and great effort required to overcome the barrier of sin and to open the path to holiness.

Some have found meaning in the fact that Jesus had five wounds and St. Peter’s Basilica has five doors. Opening the Holy Door recalls the piercing of Jesus’ side from which poured forth blood and water, the source of regeneration for humanity. The Holy Door of St. Peter’s, in fact, is decorated with 16 bronze panels depicting the story of Jesus, in his mercy, seeking his lost sheep.

The symbolism of the hammer in the hands of the pope represents the power and jurisdiction God gives him to cast away the stones of sin, chink open hardened hearts and break down walls separating humanity from God.

The removal of the wall also conjures up pulling away the stone that sealed the tomb of Lazarus, whom Jesus resurrected from the dead.

For the closing of the door at the end of the Holy Year, the traditional rite included the pope blessing and spreading the mortar with a special trowel and setting three bricks for the start of a new wall — a symbol of the spiritual rebuilding of the Lord’s house as well as the ever-present human temptation to put up new barriers against God with sin.

While there have been some changes to those ceremonies over time, the Holy Door is always a reminder that because of God’s mercy, any obstacles can always be removed, and the door to hope and forgiveness is always there waiting.

PREVIOUS: Back to the catacombs: New emphasis placed on bishops’ simplicity pact

NEXT: Freed Syrian priest says imprisonment was way to carry cross of Jesus