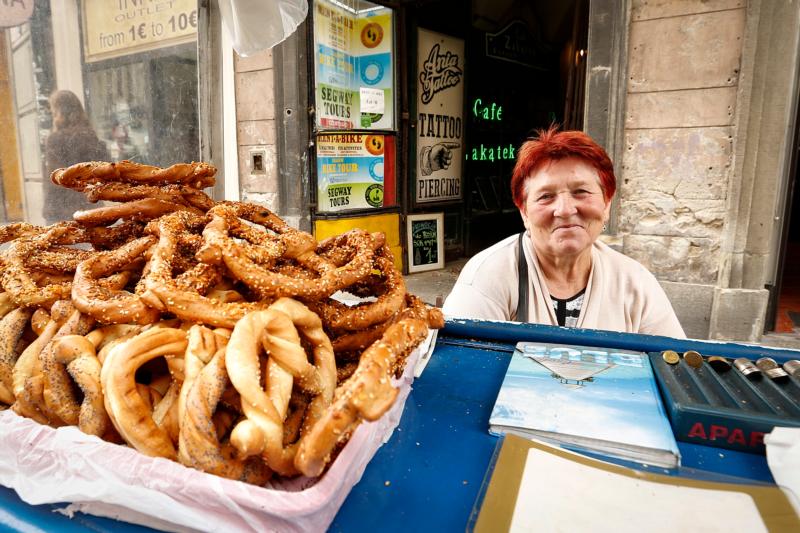 A woman sells "obwarzanek krakowski," the bagel of Poland, in early September on a street in Krakow, Poland. (CNS photo/Nancy Wiechec)

OBWARZANEK KRAKOWSKI — The bakers of Krakow have been producing this cousin to the common bagel for nearly 600 years. Sold all over the city from mobile kiosks, its chewy, dense, and subtly sweet dough is formed into a ring large enough to put a fist through. It’s boiled then baked and topped with poppy seeds, salt, onions, and/or sesame seeds.

KREMOWKA PAPIESKA (Papal Cream Cake) — When St. John Paul II visited his hometown, Wadowice, in 1999, he waxed nostalgic about the sweet cream cakes he and his schoolmates pooled their money to purchase from a baker on the town square. Almost overnight bakeries across the country began turning out the sheets of puff pastry or short cake, sandwiching a thick layer of rich custard, dusted with confectioner’s sugar.

DONER KEBAB — This uniquely Turkish-German street-food fusion arrived in Poland in the early part of this century, spreading across the country and taking on a local character. Beef, chicken, or sometimes pork is shaved from a vertical spit onto grilled flatbread, heavily garnished with lettuce, tomato, corn, red cabbage and mayo.

ZAPIEKANKA — A toasted half-sandwich roll topped with melted cheese, sauteed mushrooms and ketchup, this communist-era answer to the West’s pizza was a cheap, omnipresent street food that fell out of favor when Poland shifted to a market economy. Today it’s making a comeback with a better quality and seemingly infinite variety of possible toppings.

BAR MLECZNY (aka “milk bar”) — Not an individual food, but bare-bones cafeterias serving dairy products and inexpensive, hearty, freshly made traditional Polish food like pierogi, kluski, cutlets, and a variety of soups. After World War II, the government subsidized milk bars as places where workers could eat cheaply. After the fall of the Berlin Wall their numbers dwindled but today, cresting on a wave of nostalgia, they’ve taken on a measure of retro chic. As ever, they remain popular with students. Expect ample portions and unsentimental service.

(Courtesy of Mike Sula, restaurant critic at the Chicago Reader)