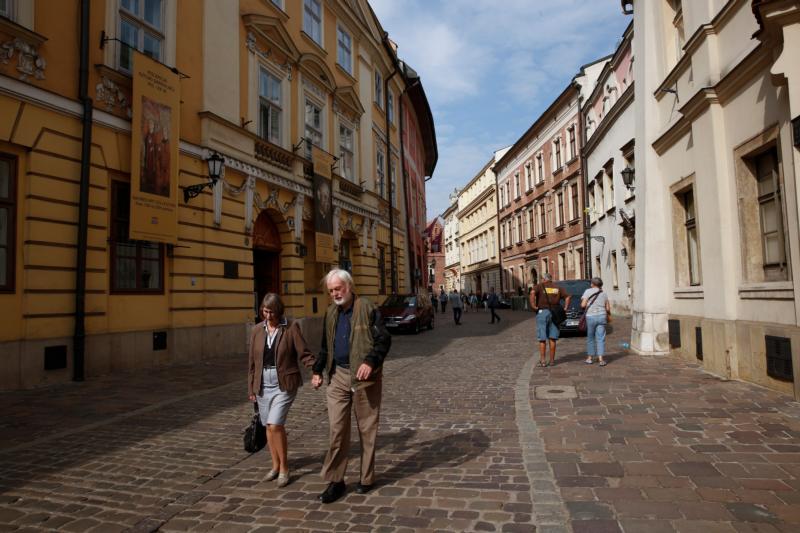 A couple walks down a street in Krakow, Poland, Sept. 3. The city, once the royal capital of Poland, will host the international World Youth Day in July. (CNS photo/Nancy Wiechec)

“Any idea what this was used for?” she asked her American tour group. No one ventured an answer.

This is where wayward Catholics were shackled on Sundays to shame them for their infidelities, she said.

“Of course, these are not used anymore,” she added. “If they were, we’d need a lot more.”

Rynek Glowny, Krakow’s main square, with its majestic basilica and medieval curiosities is the heart of Krakow, the enchanting former royal capital of Poland.

“The city of St. John Paul II and St. Faustina Kowalska is waiting for us with open arms and hearts,” he said in a letter released in August.

Organizers are expecting up to 2.5 million people for the international Catholic festival, including 35,000 from the United States. More than 400,000 pilgrims from around the world had registered as of October.

The city is so popular with travelers that it ranks in the Conde Nast readers’ choice of the top 25 cities in the world. With many Catholic points of interest and its strong connection to the life of St. John Paul, Krakow and its environs remain a top pilgrim destination as well.

“Krakow is historic, atmospheric, romantic, friendly and charming,” said Basiura, a city guide and doctor of philosophy. “There’s always something interesting to see and do.”

The gothic St. Mary’s Basilica anchors the main square, the largest in Europe. The church is dedicated to the assumption of Mary. Its most cherished work of art, a wooden and gilded altarpiece by German sculptor Veit Stoss, depicts Mary’s dormition and assumption into heaven. Outside, situated between the basilica’s massive towers, a digital clock counts down to the opening of World Youth Day.

At the center of the square is Cloth Hall, a medieval market filled with venders offering Polish handicrafts, art, clothing and jewelry. Religious goods, including renditions of Poland’s patroness, Our Lady of Czestochowa, and amber rosaries can be found there.

A draw for students, Krakow is home to 12 public universities. Jagiellonian University, founded in 1364 by King Casimir the Great, is its oldest and most prestigious.

Karol Wojtyla, later St. John Paul, spent nearly four decades in Krakow and was its archbishop from 1964 until his election as pope in 1978. Statues and images of him appear throughout Krakow, including on Wawel Hill, the city’s birthplace and treasured landmark.

In 1946, newly ordained Father Wojytla celebrated his first Mass in the crypt of St. Leonard below Wawel Cathedral. Later, he was installed archbishop at the cathedral, which is dedicated to Sts. Stanislaus and Wenceslas. Memorabilia related to St. John Paul are displayed in the cathedral’s museum.

Located south of the city center is the immense modern Divine Mercy Sanctuary, dedicated to the devotion promulgated by St. Faustina and advanced by St. John Paul II. Pope Francis is to lead the Way of the Cross from the sanctuary during World Youth Day.

In 2002, St. John Paul blessed the new sanctuary at the site where St. Faustina died. It had personal meaning to him, he said during the dedication. It was the place he would stop to pray while working at a nearby factory during the Nazi occupation of Poland.

The two-story sanctuary, constructed in the shape of a ship with a capacity for 5,000 worshippers, is set apart from the city’s historic churches.

Two of Krakow’s most visited churches are Sts. Peter and Paul and St. Andrew’s, located adjacent to one another along Grodzka Street just off the Main Square.

Baroque statues of the apostles greet tourists and worshippers as they enter the gates of Sts. Peter and Paul, built for the Society of Jesus in the 17th century. Father Piotr Skarga, a Jesuit preacher and writer, court chaplain and top figure in the Counter-Reformation, is buried there.

The stone Romanesque St. Andrew’s is nearly 900 years old. The residents of its convent of Poor Clares have been offering prayers unceasingly since the 14th century.

Chicagoan Daniel Pogorzelski, who has lived in city and recently visited, said the former Polish capital has a charm that one cannot ignore.

“Its appeal is inescapable,” he said. “We have a phrase that expresses it, ‘magiczny Krakow!’ magical Krakow!”

NEXT: Polish dioceses get ready to welcome pilgrims before World Youth Day