Knowing how to cry opens one to tenderness, pope says at cemetery Mass 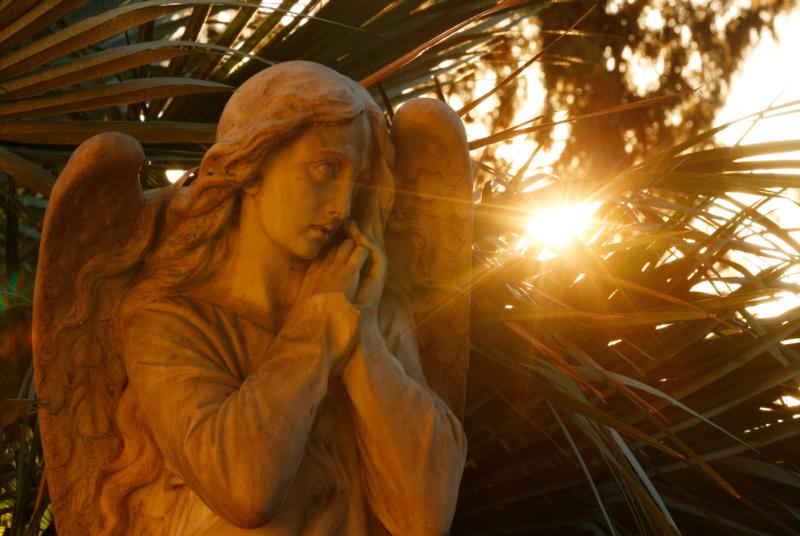 Sun backlights a decorative angel on a tombstone as Pope Francis celebrates Mass in Verano cemetery in Rome Nov. 1, the feast of All Saints. (CNS photo/Paul Haring)

ROME (CNS) — While the Beatitudes can seem counterintuitive, Jesus knew that the poor in spirit, those who mourn or are persecuted and those who work for peace and justice are those who are open to experiencing God’s love and mercy, Pope Francis said.

Celebrating an evening Mass Nov. 1, All Saints Day, amid the tombs of Rome’s Verano cemetery, Pope Francis assured people that the saints would intercede for them and for their beloved departed.

Hundreds of people went to the cemetery to prepare their loved ones’ graves for the Nov. 2 feast of All Souls. As Pope Francis processed to the temporary altar, he also stopped to lay a white rose on a grave.

The day’s Gospel reading was St. Matthew’s version of the Beatitudes, which the pope said was the path Jesus taught as the road to heaven.

“It’s a journey difficult to understand because it goes against the tide, but the Lord tells us that whoever takes this path is happy, (or) sooner or later will become happy,” the pope said.

Those who are “poor in spirit,” the pope said, are happy because heaven is their only treasure; heaven awaits them.

Those who mourn are blessed because without ever having experienced “sadness, anguish, pain, one will never know the power of consolation,” the pope said. But those who know how to weep for themselves and for others will experience the caress of “the tender hand of God.”

“How many times,” the pope asked, “are we impatient, nervous, always ready to complain” and to criticize others as if “we were the bosses of the world when in reality we are all children of God?”

Jesus showed his followers that meekness is the path to eternal happiness, the pope said. Although the son of God, he experienced exile as a child in Egypt, he was slandered, falsely accused and condemned. But “he took it all with meekness. He bore it out of love for us, even to the cross.”

Those who hunger and thirst for justice, the pope said, “will be satisfied because they are ready to welcome the greater justice, which is what only God can give.”

The merciful are blessed because they have experienced the truth that everyone is in need of forgiveness and mercy, the pope said. “They don’t judge everything and everyone, but try to put themselves in the other’s shoes.”

Mass always begins with asking God’s forgiveness and mercy; it is a time when “we recognize ourselves for what we are, sinners. It’s not just a saying, a formality,” he said. “And if we learn how to give others the forgiveness that we ask for ourselves, we will be blessed.”

The Beatitudes say that peacemakers will be blessed and that is something often visible in the here and now, he said. “Look at the faces of those who go around sowing discord; are they happy? Those who always look for opportunities to trick others, to take advantage of others, are they happy? No, they cannot be happy.”

But those who patiently try each day to promote peace and reconciliation, even through small gestures at home and at work, “are blessed because they are true children of our heavenly Father, who always and only sows peace.”

As dusk approached, Pope Francis asked the thousands of people gathered in the cemetery to pray with him for “the grace to be simple and humble people, the grace to know to weep, the grace to be meek, the grace to work for justice and peace and, especially, the grace to let ourselves be forgiven by God in order to become instruments of his mercy.”

Earlier in the day, the pope recited the Angelus with visitors gathered in St. Peter’s Square, focusing on the call to be saints that all Christians receive at baptism.

The saints officially recognized by the church and the saints “next door” are models to imitate and are those who give people encouragement, he said.

At baptism, the pope said, “we received the ‘seal’ of our heavenly Father and we became his children. To put it simply, we have God’s last name,” and a vocation to holiness.

The saints — formally recognized by the church or known only to their families and friends — are those who have kept that seal intact and behaved as children of God, he said.

“To imitate their gestures of love and mercy is a bit like continuing their presence in the world,” he said. “These evangelical gestures are the only ones that resist the destruction of death. An act of tenderness, generous help, time spent listening, a visit, a nice word, a smile — these can seem insignificant, but in the eyes of God they are eternal because love and compassion are stronger than death.”

NEXT: Cardinal says in homily Pope Francis will visit Mexico in February