Reporter claims pope approves Communion for all remarried who ask 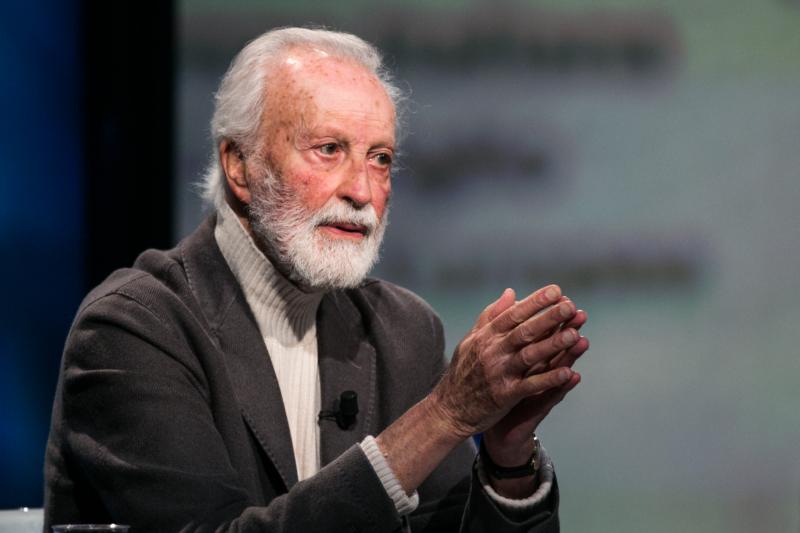 Italian journalist Eugenio Scalfari, co-founder and former editor of La Repubblica, speaks on Italian television Feb. 1. Scalfari wrote in La Repubblica about his Oct. 28 telephone conversation with Pope Francis. The journalist claims the pope said that in principle Communion for the divorced and civilly remarried was accepted by the recent Synod of Bishops on the family. (CNS photo/Cristiano Minichiello, AFG)

Updated – VATICAN CITY (CNS) — The Vatican spokesman described as obviously “unreliable” an Italian journalist’s claim that Pope Francis told him that following the Synod of Bishops on the family, “all the divorced who ask” will be admitted to Communion.

Eugenio Scalfari, a co-founder and former editor of La Repubblica, an Italian daily, said Pope Francis — with whom he has had several telephone conversations and a face-to-face meeting — phoned him the evening of Oct. 28 to discuss an article Scalfari had written about the synod.

“You can imagine my happiness as a non-believer privileged by the friendship of Francis,” Scalfari wrote Nov. 1 in La Repubblica.

The journalist has explained on more than one occasion that he does not take notes or record his conversations with the pope; he re-creates them afterward from memory, including the material he puts in quotation marks.

Jesuit Father Federico Lombardi, Vatican spokesman, told Catholic News Service late Nov. 2 that often Scalfari’s reconstructed quotations “do not correspond to reality” because they are not “the exact words of the pope.”

“Therefore, it is obvious that what he refers to in his latest article about the divorced and remarried is not in any way reliable and cannot be considered the thought of the pope,” Father Lombardi said.

Scalfari said Pope Francis spoke about the diversity of opinions expressed by bishops at the Oct. 4-25 synod, particularly on the feasibility of some divorced and civilly remarried Catholics receiving absolution and being allowed to receive Communion even if their first, sacramental marriage has not been annulled.

“In principle, it was accepted by the synod,” the pope said, according to Scalfari. “This is the basic result: the evaluations of the facts are entrusted to confessors, but at the end of the processes — whether quick or slow — all the divorced who ask for it will be admitted.”

The synod’s final report to Pope Francis was not that clear and, in fact, did not specifically mention Communion for the divorced and civilly remarried. In current church practice, in almost all cases, such people are not to receive Communion because the church recognizes only their sacramental marriage as valid.

The synod did, however, emphasize how “pastoral accompaniment” involves discerning, on a case-by-case basis, the moral culpability of people not fully living up to the Catholic ideal of marriage and the diversity of consequences based on their level of responsibility for the breakup of a marriage. Several bishops said that left the possibility open for an eventual return to the sacraments.

Writing about his latest conversation, Scalfari said Pope Francis described families as a changing institution — with positive and negative results — but one that will never disappear because human beings are social beings and families are “the supporting beam for sociability.”

“The church must work so that the positive elements will prevail over the negative,” Scalfari cited the pope as saying.

NEXT: Knowing how to cry opens one to tenderness, pope says at cemetery Mass