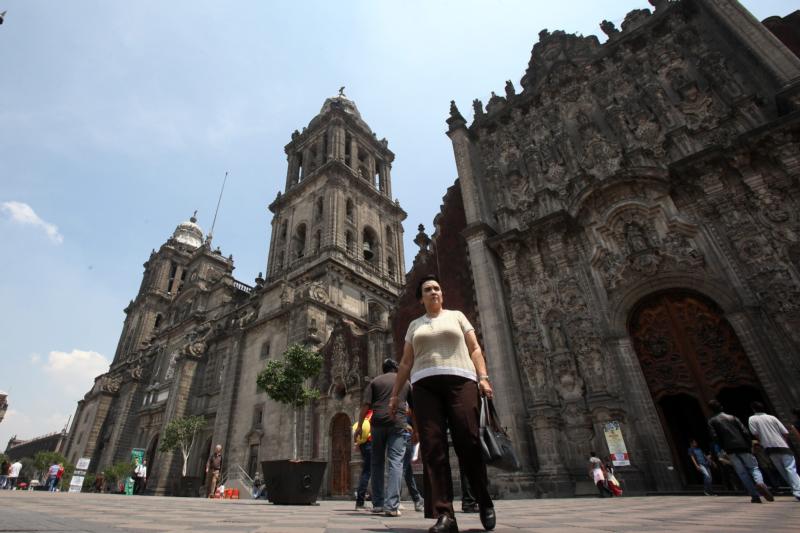 People walk outside the Metropolitan Cathedral in 2013 in Mexico City. Mexican Foreign Minister Claudia Ruiz Massieu has confirmed that Pope Francis will visit the capital, along with the states of Chihuahua and Chiapas, on the northern and southern borders respectively, and Michoacan in western Mexico. (CNS photo/Alex Cruz, EPA)

MEXICO CITY (CNS) — Mexican Foreign Minister Claudia Ruiz Massieu has confirmed that Pope Francis will visit the capital, Mexico City, along with the states of Chihuahua and Chiapas — on the northern and southern borders respectively — and Michoacan in western Mexico.

“The details will be known in December,” she said Nov. 11, acknowledging where the pope will travel early next year. Spokesmen for dioceses in the three states and Mexico City confirmed details when contacted by Catholic New Service.

Most notably, Pope Francis is exploring the possibility of visiting the previously problematic border city of Ciudad Juarez, where a battle between drug cartels during the past decade cost more than 10,000 lives in a four-year period.

The Vatican’s papal planning team, along with representatives of the Mexican government, visited in preparation for a possible trip, which would include encounters with the community, priests and seminarians and perhaps a prison visit in a lockup previously considered the worst in Latin America.

“The probability is very high that he comes to Juarez,” said Father Hesiquio Trevizo, spokesman for the Diocese of Ciudad Juarez.

Pope Francis is also expected to visit Chiapas, the least-Catholic state in Mexico, where a portion of the mostly indigenous population has abandoned the church for Protestant congregations. Father Pedro Arriaga, spokesman for the Diocese of San Cristobal de Las Casas, says the visit comes as the Vatican, under Pope Francis’ leadership, looks favorably on celebrating Mass in local languages — now a reality in Chiapas — and the ordination of indigenous deacons, something previous popes ended.

The pope’s approach coincides with that of Bishop Samuel Ruiz Garcia, who led the diocese for four decades until 1999, Father Arriaga said. The bishop focused on the indigenous, “the periphery,” and addressing both poverty and the environment, the priest said.

In Michoacan, to the west of Mexico City, the pope will find a state still struggling with outward migration and violence from a quasi-religious drug cartel known as Knights Templar, which operated in the long-neglected Tierra Caliente region. The Knights Templar preached its home-spun version of the Gospel as it made methamphetamines in clandestine labs and extorted locals. Self-defense groups formed in 2013 in response and often operated with the blessing of priests in the Diocese of Apatzingan.

Cardinal Norberto Rivera Carrera of Mexico City has announced Pope Francis will arrive Feb. 12 in what’s the world’s second-most populous Catholic country, where politicians are consumed with issues such as violence, corruption and a way to win legitimacy through appearances with the pontiff. The trip, if carried out as proposed, would allow the pope to address issues such as poverty, migration, violence and indigenous issues, along with visiting the Basilica of Our Lady of Guadalupe, the world’s most visited Marian shrine.

Earlier, Pope Francis said he wanted to visit Ciudad Juarez in 2015 and cross the border into neighboring El Paso, Texas, in an act of solidarity with migrants, many of whom transit Mexico in attempts to reach the United States.

Father Trevizo said such a crossing is unlikely on the 2016 papal visit. He said the border visit would be for a day and expressed hopes the papal visit would “reinforce the faith” in a city with growing non-Catholic congregations and still scarred by the violence erupting after rival cartels disputed a coveted drug-trafficking corridor.

“It’s a city that has experienced conflicts,” he said. “It’s lived through deep crises such as the killing of so many women, the war against drug trafficking, which left more lives lost than a traditional war.”

Ciudad Juarez, which mushroomed as factories for export were built near the U.S. border, became notorious for murdered and missing women, whose cases went unsolved and unpunished. Drug violence exploded late in the past decade and hit the city especially hard, along with factories suspending operations due to the 2008 world economic crisis.

The economy has bounced back, but the conditions in the maquiladoras, as the export factories are known, are not always ideal, and priests say the conditions led to situations of both parents working long hours make ends meet, while children were left without guidance.

“There is plenty of work, but it’s poorly paid,” said Father Roberto Luna, pastor at the Corpus Christi Parish, where crime was so bad that thieves stole the church bell. “People worry about losing their jobs, but, at the same time, they’re looking to make more.”

Violence has diminished to the point Ciudad Juarez, with a population of 1.3 million, registered just 17 homicides in October, though priests caution the issue is not entirely resolved.

The local prison, where a riot left 18 dead in 2011, is also being renovated to eliminate issues such as overcrowding and inmates running the institution.

“Violence has increased in other parts of Mexico,” Father Luna says. “It’s has taken attention away from Juarez.”

NEXT: Ex-Irish president says she’s devoted to Catholicism despite dissents