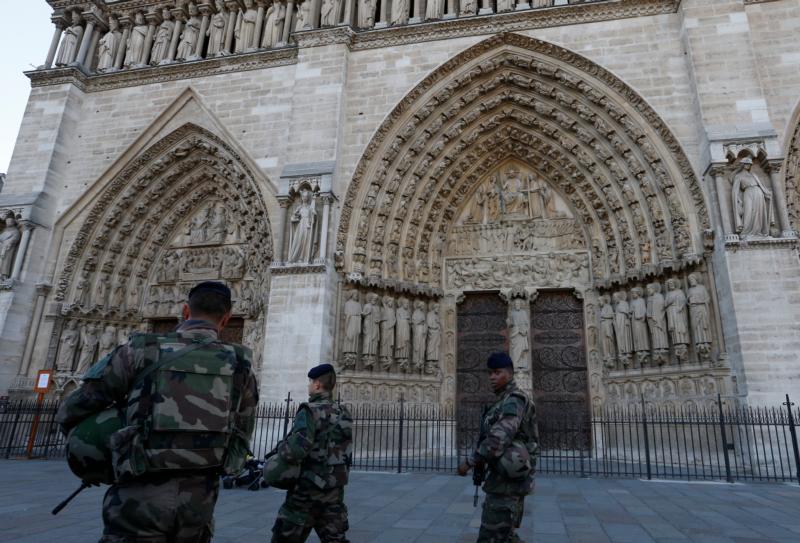 Soldiers pass the main entrance of Notre Dame cathedral in Paris Nov. 15. Sunday Masses were celebrated amid tight security outside the cathedral in the aftermath of Nov. 13 terrorist attacks in Paris that killed 129 and injured 352. (CNS photo/Paul Haring)

“Such barbarity leaves us dismayed, and we ask ourselves how the human heart can plan and carry out such horrible events,” the pope said after reciting the Angelus prayer with visitors in St. Peter’s Square.

The attacks in Paris Nov. 13 — attacks the French government said were carried out by three teams of Islamic State terrorists — caused the deaths of at least 129 people and left more than 350 injured, many of them critically. A suicide bomber blew himself up outside a soccer stadium, gunmen attacked customers at cafes and restaurants and a team of terrorists gunned down dozens of people at a concert.

The attacks, Pope Francis said, were an “unspeakable affront to the dignity of the human person.”

“The path of violence and hatred cannot resolve the problems of humanity, and using the name of God to justify this path is blasphemy,” he said.

Pope Francis asked the thousands of people who gathered at St. Peter’s for the Sunday midday prayer to observe a moment of silence and to join him in reciting a Hail Mary.

“May the Virgin Mary, mother of mercy, give rise in the hearts of everyone thoughts of wisdom and proposals for peace,” he said. “We ask her to protect and watch over the dear French nation, the first daughter of the church, over Europe and the whole world.”

“Let us entrust to the mercy of God the innocent victims of this tragedy,” the pope said.

Speaking Nov. 14, the day after the terrorist attacks, Pope Francis had told the television station of the Italian bishops’ conference, “I am shaken and pained.”

“I don’t understand, but these things are difficult to understand, how human beings can do this,” the pope said. “That is why I am shaken, pained and am praying.”

The director of the television station recalled how the pope has spoken many times about a “third world war being fought in pieces.”

“This is a piece,” the pope responded. “There are no justifications for these things.”

On social media, Islamic State militants claimed responsibility, but Pope Francis insisted there can be no “religious or human” excuse for killing innocent people and sowing terror. “This is not human.”

French authorities reported Nov. 14 that eight terrorists were dead after the night of attacks; six of them committed suicide and two were killed by police, who stormed the concert hall where the terrorists had taken hostages and where the majority of victims died.

Cardinal Andre Vingt-Trois of Paris issued a statement calling for calm and for prayers, not only for the Paris victims, but also for the victims of recent terrorist attacks in Lebanon and in Africa.

“May no one allow himself to be defeated by panic and hatred,” the cardinal said. “Let us ask for the grace of being peacemakers. We must never lose our hope for peace if we work for justice.”

With some 1,500 inside Paris’ Notre Dame Cathedral and hundreds more gathered outside Nov. 15, Cardinal Vingt-Trois celebrated a special Mass in memory of the victims. As the cathedral bells tolled a death knell, police patrolled the square in front of the cathedral and checked people as they entered the Paris landmark for Mass.

The cardinal told the assembly — which included government officials and ambassadors from a variety of nations — that the Mass was intended as a sign of sharing the pain of the victims and of praying for them, their families, for Paris and for France.

“The savage killings this black Friday plunged entire families into despair, and this despair is all the more profound because there can be no rational explanation that would justify the indiscriminate execution of dozens of anonymous people,” the cardinal said.

The only Christian response, he said, is to be “messengers of hope in the heart of human suffering.”

The terrorists succeed if their actions shake Christians’ hope founded on faith in Christ and on a belief that all of history, including moments of suffering, is in God’s hands, he said.

The appropriate response to the “barbaric savagery” of the terrorists, he said, is “to demonstrate additional trust in our fellowmen and their dignity.”

Just a few hours after the attacks occurred, Jesuit Father Federico Lombardi, Vatican spokesman, issued a statement saying the Vatican was “shocked by this new manifestation of maddening terrorist violence and hatred, which we condemn in the most radical way.”

Cardinal Pietro Parolin, Vatican secretary of state, sent a message in the pope’s name to Cardinal Vingt-Trois, calling the attacks “horrific” and relaying the pope’s prayers for the victims, their families and the entire nation.

“He invokes God, the father of mercy, asking that he welcome the victims into the peace of his light and bring comfort and hope to the injured and their families,” Cardinal Parolin wrote.

The pope also “vigorously condemns violence, which cannot solve anything, and he asks God to inspire thoughts of peace and solidarity in all.”

Father Lombardi was asked about security concerns throughout Europe, and particularly whether the terrorist attacks would impact plans for the Year of Mercy, which is scheduled to begin Dec. 8.

“These murderers, possessed by senseless hatred, are called terrorists precisely because they want to spread terror,” Father Lombardi responded in a statement. “If we let ourselves be frightened, they will have already reached their first objective.”

“It goes without saying that we must be cautious, and not irresponsible,” he said, but “we must go on living by building peace and mutual trust.”

“I would say that the Jubilee of Mercy shows itself even more more necessary,” Father Lombardi said. Preaching God’s love and mercy also is a call for people to love one another and reconcile with each other. It “is precisely the answer we must give in times of temptation to mistrust.”

Contributing to this story was Paul Haring in Paris.

NEXT: Canadian theologian visiting Paris was minutes away from the bloodshed