Canadian theologian visiting Paris was minutes away from the bloodshed 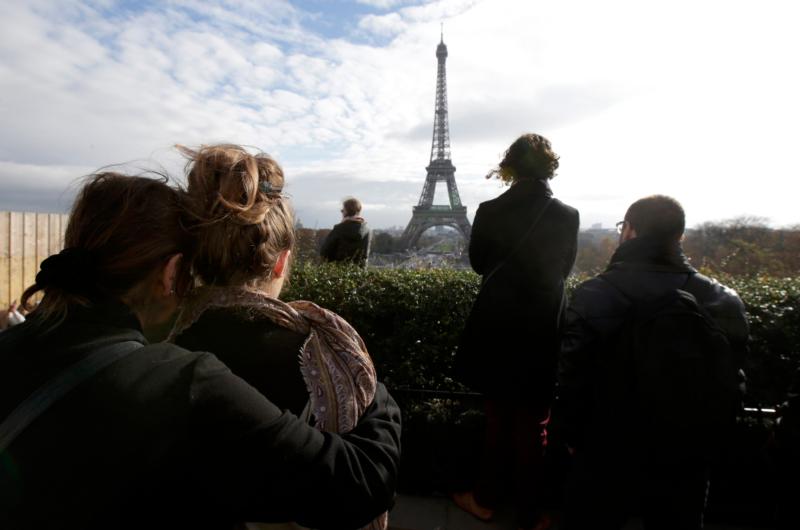 People observe a minute of silence at the Trocadero in Paris Nov. 16. (CNS photo/Philippe Wojazer, Reuters)

MONTREAL (CNS) — When Daniel Laliberte planned his Paris getaway with his wife, he had no clue he would end up being only meters away from the biggest terrorist attack Europe has known in the past decade.

Laliberte, a Canadian Catholic who formerly worked for the Archdiocese of Quebec, is a theology professor at the Luxembourg School of Religion and Society. On Nov. 13, he and his wife were returning to their hotel at Republique square when the metro was stopped. Police officers told them they would have to walk the rest of the way, Laliberte told Presence info.

At the time, the couple had no idea of the attacks that occurred moments earlier just blocks from their hotel, and that a hostage crisis was underway at the Bataclan concert hall, only three blocks away. Laliberte said he told his wife that all the police and sirens were adding some zest to their trip.

When they turned on the TV in their room and realized the scale of what was going on, they were in awe.

“I felt ridiculous,” said Laliberte, referring to his earlier comment. Even though he felt safe in his room, he told Presence info, he was still “freaked out” knowing this was happening right next to him.

He said he felt the impact of the attacks the following day, when crowds gathered all day long around the statue on Republique square to light candles and place flowers. Similar crowds had been there only months before, after the attack on satirical journal Charlie Hebdo, located in the same area.

“Policemen were asking people to go away, since they had orders to prevent any kind of gathering. But people stayed there. Once in a while, someone dared walk the few meters to leave flowers or candles. Finally, the police gave up and allowed people to get closer. I assure you: It was very intense to participate in that,” said Laliberte, describing an atmosphere of “united determination.”

The theologian described his mixed emotions.

“It says something about our own Western contradiction: On one side, we don’t want to get engulfed in violence and wish for another response. But at the same time, a part of us seems to wish that our planes succeed in eradicating ISIS,” Islamic State, which claimed responsibilities for the Nov. 13 coordinated attacks in Paris.

Laliberte said people must refrain from making “automatic associations” between the Paris attacks and Islam.

“At the same time, we must dare to ask: Why is this born so often, in fact almost always, in the Muslim world?” he added, saying he hoped Muslim theologians would think about that question.