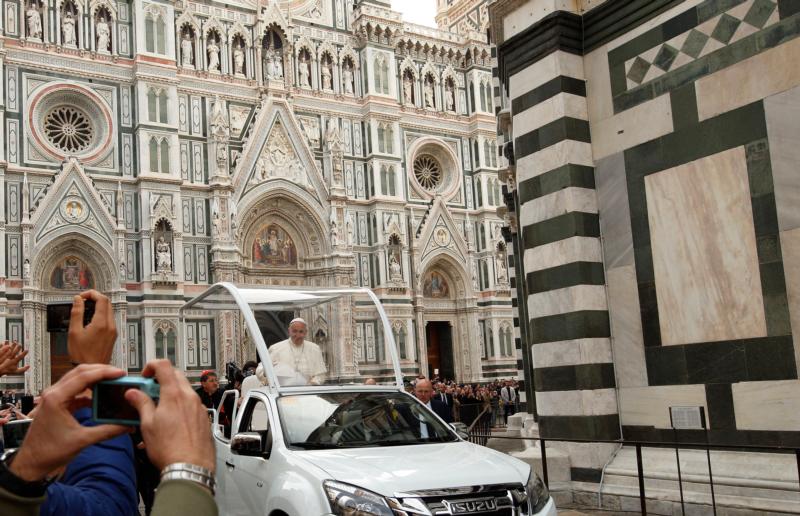 Pope Francis arrives outside the Duomo, the Cathedral of Santa Maria del Fiore, left, Nov. 10. Pope Francis attended a meeting of Italy's bishops and cardinals in the Duomo during a one-day visit to Florence Nov. 10. The pope also met young people and was to celebrate Mass at a soccer stadium. (CNS photo/Paul Haring)

FLORENCE, Italy (CNS) — Meeting workers and addressing a major gathering of the Catholic Church in Italy, Pope Francis demanded an end to economic exploitation, to clerics “obsessed” with power, to apathy among youth and to a cold, fearful church that forgets Christ is always by its side.

“These times of ours demand that we experience problems as challenges and not like obstacles: The Lord is active and at work in the world,” he said Nov. 10 inside Florence’s Cathedral of Santa Maria del Fiore — the third-largest church in Europe.

In a trip that covered a normal 8 a.m.-to-5 p.m. workday, the pope rallied workers, young people and hundreds of church leaders representing the entire Italian peninsula; he met with the sick, kissed babies, admired Renaissance artwork and venerated an ancient relic. He ate lunch with the poor and homeless and celebrated Mass in a city soccer stadium.

Much of the city seemed empty of residents, yet filled with people who came to see the pope and tourists curious about the beefed-up security and roadblocks.

Speaking to hundreds of Italian cardinals, bishops and laypeople attending a national congress held only every 10 years, the pope gave a lengthy, yet clear indication of where their discussions and pastoral mission should be heading.

“We must not tame the power of the face of Jesus,” who takes on the face of the humiliated, the enslaved and “the emptied,” he said.

A divine Christ reflects a very human gaze of humility and selflessness, and he insists his disciples follow the beatitudes like he did, the pope said.

“We must not be obsessed with power,” the pope said, even if it is a useful or seemingly innocuous way of getting things done. Otherwise the church “loses its way, loses its meaning.”

Standing at a lectern beneath a stunning painted dome ceiling representing the Last Judgment, the pope said the beatitudes indicate whether the church is following its mission or is only thinking of protecting its own interests. Measuring oneself against the beatitudes “is a mirror that never lies,” he said.

Reading animatedly from his written remarks, the pope also found moments to offer a bit of humor, like when warning church leaders against various temptations.

“I’ll present at least two” temptations, but not a huge list of 15 like he spelled out in a memorable pre-Christmas address to the Roman Curia in 2014, he said to applause and laughter in the pews.

Do not feel superior and place complete trust in structures and perfect plans, he said. This focus on the abstract and on security “often leads us to take on a style of control, harshness, regulation.”

When “facing evils or problems in the church,” he said, “it is useless to seek solutions in conservatism and fundamentalism, in the restoration of outdated conduct and forms” that are no longer culturally relevant or meaningful.

Christian doctrine, in fact, isn’t a closed system void of questions or doubts, but is alive, restless, animated. Its face “isn’t rigid, its body moves and develops, it has tender flesh. Its name is Jesus Christ.”

The same spirit that drove Italian explorers to seek new worlds, unafraid of storms and open seas, can drive the church in Italy, Pope Francis said, if it lets itself be driven by the breath of the Holy Spirit, “free and open to challenges of the present, never in defense out of fear of losing something.”

He also told priests and bishops to be shepherds, “nothing more. Shepherds.” To illustrate what that looked like, the pope told a story of a bishop who was riding the subway during rush hour.

It was so packed, there was nothing to hold onto, and “pushed right and left” by the swaying car, the bishop leaned on the people around him so as not to fall. A bishop will find support, he said, by leaning on his people and through prayer, he said.

Underlining the importance of caring for the poor — who know well the suffering and face of Christ, the pope asked God to protect the church in Italy from all forms of power, facades and money.

He recalled an old practice in Italy when mothers, who were unable to care for their newborns, left behind a small medallion, snapped in half, with the babies they gave up for adoption at a Catholic hospital. The birth mothers would keep the other half, he said, in the hopes that one day, when times had improved, they would be able to find their children.

“We have that other half. The mother church has the other half of everyone’s medallion and it recognizes all of its abandoned, oppressed and tired children,” he said. “The Lord shed his blood for everyone, not a select few.”

“I like a restless church in Italy, ever close to the abandoned, the forgotten, the imperfect,” the pope said.

“I want a happy church with the face of a mother, who understands, accompanies, caresses. Dream for this church, too, believe in this, innovate with freedom,” he told the bishops, pastors and lay leaders.

The pope flew by helicopter from Rome early in the morning to land first in the industrial town of Prato on the outskirts of Florence. He apologized for his brief 90-minute visit there, saying he had come as “a pilgrim, a pilgrim in passing.”

In the town’s cathedral, he venerated the Holy Belt of Our Lady — an ancient band of wool traditionally believed to have belonged to Mary and used to wrap her flowing robes around her waist.

From the cathedral balcony, he greeted thousands of people who had woken very early for the 8 a.m. encounter or slept there overnight in sleeping bags.

Addressing young people and workers, especially foreign workers, the pope criticized the “cancer” of corruption and exploitation, calling it the “venom” of a culture built on operating outside the law.

He recalled the seven Chinese textile workers who were killed two years ago when the pre-fab warehouse they worked and slept in caught fire and caused the roof to collapse.

The pope said the deaths of those men and women, who slept in a tiny alcove jerry-rigged out of cardboard and drywall, “is a tragedy of exploitation and inhumane living conditions.”

To people’s cheers and applause, he urged young people and workers to fight to the very roots of the problem of “the cancer of corruption” and “the cancer of human and worker exploitation.”

NEXT: To help people, church must be in touch with ‘reality,’ pope says