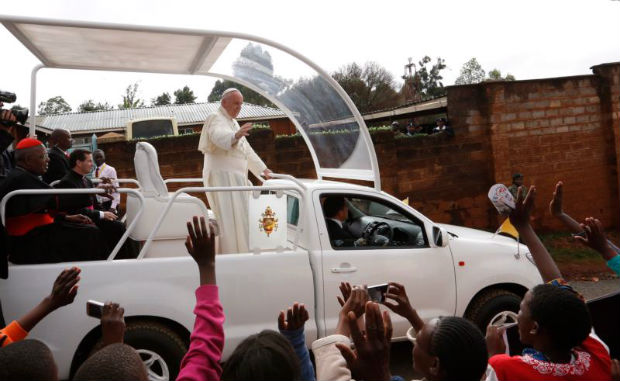 Pope Francis arrives to visit a Catholic parish in the Kangemi slum on the outskirts of Nairobi, Kenya, Nov. 27. (CNS photo/Paul Haring) 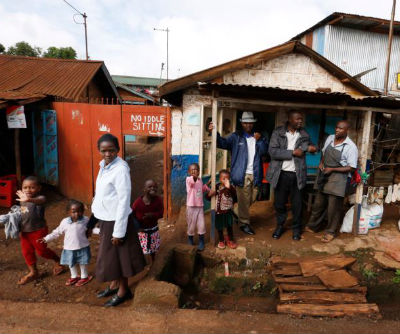 People wait to see Pope Francis during his visit to the Kangemi slum on the outskirts of Nairobi, Kenya, Nov. 27. (CNS photo/Paul Haring)

NAIROBI, Kenya (CNS) — The wealth of residents of the poorest neighborhoods ringing big cities around the world will never be quoted on the stock exchange, even though their wealth gives life and joy to millions of people, Pope Francis said.

The pope began his day Nov. 27 in Nairobi’s Kangemi neighborhood, usually referred to as a slum. It features tiny dwellings made of cinder block, tin or reclaimed boards. The homes are jumbled together with dirt roads and paths running between them.

Residents were thrilled not only that the pope would take time to visit them, but that the government fixed several of the roads, installed some street lights and unblocked some water pipes in preparation for the pope’s visit.

Exact figures vary, but between 55 percent and 65 percent of Nairobi’s population live in the slums. Many have no drinking water, electricity, sewage system or regular garbage collection.

Irish Mercy Sister Mary Killeen, who has ministered in Kenya for three decades, told Pope Francis that fires — especially from kerosene lamps and stoves — and floods are a danger. Evictions are frequent since the people do not own the land on which their shacks are built.

At a meeting in the Jesuit-run St. Joseph the Worker Church, Pamella Akwede, a resident, told the pope, “People in informal settlements live together as family, in unity and solidarity,” which is evident in the celebrations of births, weddings and funerals.

“Any resident of any informal settlement survives on less than a dollar a day,” she said, but fresh fruits are available and “one can get their stomach full on a cup of tea and doughnut” for the equivalent of 19 cents.

Most of the people in Kangemi and the other slums of Nairobi work in factories, Akwede said, but they do not earn enough to pay for rent in a better neighborhood.

Pope Francis told the people gathered in the church that he had an obligation to denounce the injustices that keep the slum dwellers living in such desperate circumstances, but he also urged the people to recognize the values they have and that the world needs: Solidarity, celebration, taking care to bury the dead, making more room at one’s simple table and taking in the sick all are characteristic of people in the world’s poorest neighborhoods.

Such values, he said, are “grounded in the fact that each human being is more important than the god of money. Thank you for reminding us that another type of culture is possible.”

While those values “are not quoted in the stock exchange,” Pope Francis said, they are the true “signs of good living.”

But the problems faced in the makeshift communities “are not a random combination of unrelated problems,” he said; they are “the consequence of new forms of colonialism,” which see African countries as “cogs on a gigantic wheel” and a storehouse of natural resources to plunder.

African nations, he said, “are frequently pressured to adopt policies typical of the culture of waste, like those aimed at lowering the birth rate.”

Pope Francis denounced the ridiculously high rent that absentee landlords charge for “utterly unfit housing” in the slum. He also insisted that governments have an obligation to ensure their citizens have “toilets, sewers, drains, refuse collection, electricity” and access to schools, hospitals and open space for recreation.

To a strong round of applause, the pope also insisted that access to drinking water be provided in the slums. “Access to safe, drinkable water is a basic and universal human right,” he said.

The pope gave special recognition to the women of Kangemi and the other informal settlements. They make heroic efforts not only to feed their children, but to protect them from violence, crime and addiction — all plagues common in the slums. The corrupt, he said, use young people “as cannon fodder for their ruthless business affairs.”

From Kangemi, Pope Francis went to Nairobi’s Kasarani Stadium for a meeting with the nation’s young people. The atmosphere was charged with excitement and infectious celebration; the Kenyan bishops started line dancing after the youths did. Kenyan President Uhuru Kenyatta and his wife arrived, going to the head of the line, dancing as they went to their seats.

A young woman and young man asked Pope Francis questions and, as they spoke, the pope took notes. In the end, he set aside his prepared text and answered their questions, particularly regarding the problems of tribalism and corruption.

“Tribalism destroys a nation,” he said. “Tribalism is keeping your hands behind your back and holding in each hand a rock to throw at others.”

“The ear, the heart and the hand” are needed to overcome tribalism, the pope told the young people, including many who were dressed in the traditional costumes of the Masai and other ethnic groups.

People need to listen to each other, ask each other about their history and customs, open their hearts to one another and extend a hand in friendship.

He called his young questioners to the podium and took their hands. Then he asked the estimated 70,000 young people who filled the stadium to hold hands as well. “We are all a nation,” he had them say. “No to tribalism.”

As for corruption, the pope compared it to sugar: It tastes good at first and it’s easy to get, but it also can make people sick.

All institutions have people tempted by corruption, the pope said, “including the Vatican.”

He urged the young people to have nothing to do with cheating or corruption; “don’t develop a taste for it,” he said.

PREVIOUS: Ugandans give pope exuberant welcome as he urges unity

NEXT: Choice is clear, pope says: Protect environment or destroy it