Ugandans give pope exuberant welcome as he urges unity 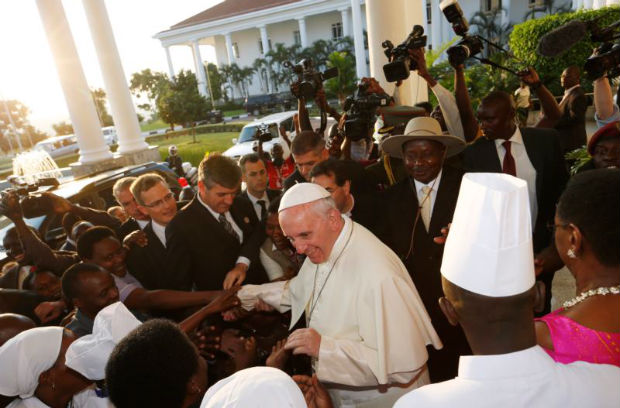 KAMPALA, Uganda (CNS) — Witnessing to what is true, good and beautiful — even if that witness is motivated by different faiths — brings people together and strengthens a nation, Pope Francis said.

Arriving in Uganda from Kenya Nov. 27, Pope Francis was greeted by a number of dance troupes playing drums as well as traditional horns and stringed instruments. Many of the dancers wore rattles on their calves, and some of the men wore the skins of the spotted hyena around their waists.

While the pope fulfilled the protocol duty of reviewing the military troops, he could not pass by the dance troupes without thanking them, especially the children.

Pope Francis went from the airport to the State House in Entebbe, where he immediately drew people’s attention to the Ugandan Martyrs — 23 Anglicans and 22 Catholics — executed by King Mwanga II of Buganda between November 1885 and January 1887.

“They remind us of the importance that faith, moral rectitude and commitment to the common good have played and continue to play in the cultural, economic and political life of this country,” the pope told President Yoweri Museveni, other government officials and members of the diplomatic corps.

The martyrs, he said, “also remind us that despite our different beliefs and convictions, all of us are called to seek the truth, to work for justice and reconciliation and to respect, protect and help one another as members of our one human family.”

On the third evening of his three-nation trip to Africa, Pope Francis said he wanted to draw attention to Africa as a whole, and not just to the continent’s problems. He praised Uganda particularly for welcoming refugees and allowing them to work.

“Our world, caught up in wars, violence and various forms of injustice, is witnessing an unprecedented movement of peoples,” he said. “How we deal with them is a test of our humanity, our respect for human dignity and above all our solidarity with our brothers and sisters in need.”

As he did earlier in Kenya, the pope also urged African leaders to dedicate themselves to ensuring education and employment for their young people, the majority of the continent’s population.

Pope Francis said his prayer was that all Ugandans “will always prove worthy of the values which have shaped the soul of your nation.”

The exuberance of the dancers at the airport was only a tiny hint of the welcome Uganda had in store for the pope: Hundreds of thousands of people waited for hours along the entire 27-mile stretch of road leading from the State House into the center of Kampala.