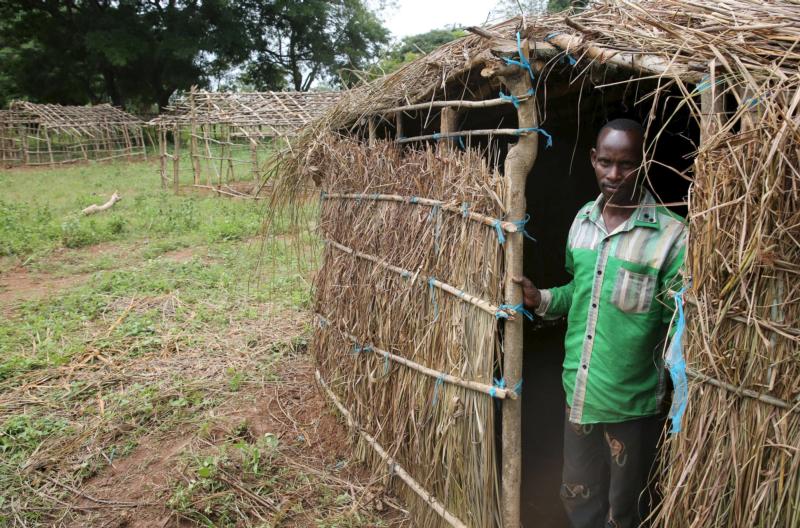 An internally displaced man stands in front of his makeshift house at a camp in Bambari, Central African Republic, Oct. 17. Despite ongoing violence in the African nation, Pope Francis said he hopes to be able to visit the country in late November and to anticipate the Year of Mercy by opening the Holy Door of the cathedral in Bangui, the nation's capital. (CNS photo/Goran Tomasevic, Reuters)

VATICAN CITY (CNS) — Despite continued instability and outbreaks of violence in the Central African Republic, the Vatican announced Pope Francis will spend about 33 hours in the country during a Nov. 25-30 visit to Africa.

Releasing the schedule for the trip, the Vatican said that while the pope is in the Central African Republic Nov. 29-30, he will visit a refugee camp, hold a meeting with evangelical Christians and visit a mosque in Bangui, the nation’s capital.

The country has known little peace or development in its 55 years of independence. In March 2013, a rebel movement, Seleka, led by Arab-speaking Islamists, suspended the nation’s constitution. French and African peacekeepers were deployed in January 2014 and the rebels were driven out of the capital.

The National Reconciliation Forum, convened by the country’s transitional parliament in May, has been trying to bring Seleka and its Christian-dominated rival, Anti-Balaka, into talks and preparations for elections that originally were scheduled for Oct. 18. The vote, however, was postponed after violence broke out again in late September.

Kenya is the first stop on Pope Francis’ first visit to Africa as pope; there, too, he will meet with ecumenical and interreligious leaders, but he also will visit the Kangemi slum on the outskirts of Nairobi.

Traveling to Uganda Nov. 27, the pope will honor the memory of the 23 Anglican and 22 Catholic Ugandan martyrs, killed for their faith on the orders of King Mwanga II between 1885 and 1887.

Here is the schedule for the trip as released by the Vatican Oct. 17. The times listed are local with Eastern Standard Time in parentheses:

6:30 p.m. (10:30 a.m.) Meeting with Kenyan government officials and members of the diplomatic corps at the State House. Speech by pope.

8:15 a.m. (12:15 a.m.) Meeting with interreligious and ecumenical representatives at the apostolic nunciature in Nairobi. Speech by pope.

6 p.m. (10 a.m.) Meeting with Ugandan authorities and members of the diplomatic corps in the conference room of the State House. Speech by pope.

6 p.m. (10 a.m.) Meeting with the bishops of Uganda in the archbishop’s residence.

11 a.m. (5 a.m.) Courtesy visit with the country’s transitional president in the presidential palace.

1 p.m. (7 a.m.) Meeting with the bishops of the Central African Republic.

4 p.m. (10 a.m.) Meeting with evangelical communities at the evangelical theological school in Bangui. Speech by pope.

5 p.m. (11 a.m.) Mass with priests, religious, catechists and youths in the Bangui cathedral. Homily by pope.

7 p.m. (1 p.m.) Hearing the confessions of some young people and beginning a prayer vigil outside the cathedral. Speech by pope.

NEXT: Those who give their lives in service are not losers, pope says