Those who give their lives in service are not losers, pope says 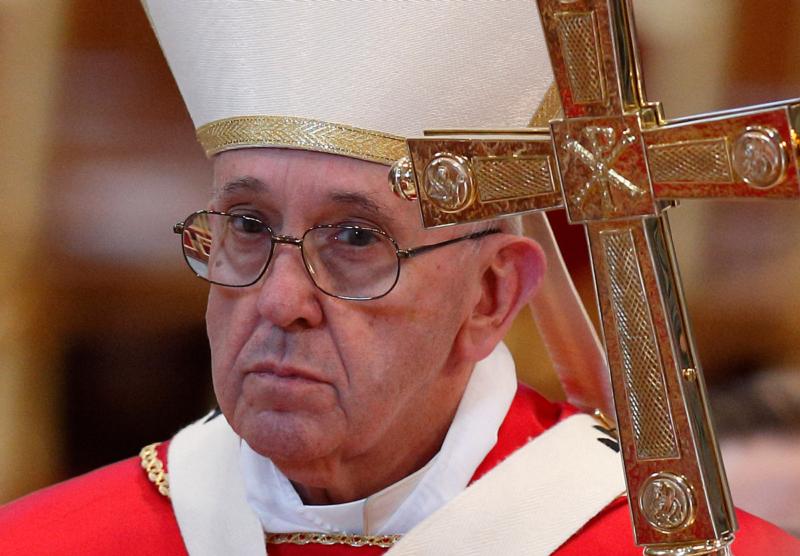 Pope Francis leaves after celebrating a Nov. 3 Mass in St. Peter's Basilica at the Vatican in remembrance of cardinals and bishops who died in the past year. They included U.S. Cardinals Edward M. Egan of New York, Francis E. George of Chicago, William W. Baum of Washington, D.C., and Canadian Cardinal Jean-Claude Turcotte of Montreal. (CNS photo/Paul Haring)

VATICAN CITY (CNS) — Serving and giving oneself for others may make one “seem like a loser in the eyes of the world,” but in reality that person is imitating Christ’s love and service, which conquered death and gave life to the world, Pope Francis said.

“He who serves, saves,” the pope said. “On the contrary, he who does not live to serve does not serve to live.”

Pope Francis presided over Mass Nov. 3 in St. Peter’s Basilica in remembrance of cardinals and bishops who died in the past year. They included U.S. Cardinals Edward M. Egan of New York, Francis E. George of Chicago, William W. Baum of Washington, D.C., and Canadian Cardinal Jean-Claude Turcotte of Montreal.

Also remembered at the Mass were 99 archbishops and bishops from around the world who died in the past 12 months, as well as Armenian Catholic Patriarch Nerses Bedros XIX Tarmouni.

Recalling the lives of the deceased cardinals and bishops, the pope expressed his gratitude for their vocation of serving others and said that like them, we too, “are called to renew the choice of serving in the church.”

The pope reflected on the Gospel reading of St. John in which Jesus tells Nicodemus that “the Son of Man must be lifted up as Moses lifted up the serpent in the desert, so that everyone who believes may have eternal life in him.”

By comparing himself to the raised serpent who saved the Israelites in the desert from the deadly bites of serpents, the pope said, Christ applied that same logic to his death on the cross which “saved us from our death.”

“Now we, looking at him, believing in him, are saved by him,” he said. “We expect a divinely triumphant victory; instead, Jesus shows a very humble victory. Lifted up on the cross, he allows evil and death to assail against him while he continues to love us.”

The pope explained that although it may be difficult to understand the mystery of Christ’s humility, the secret lies in the strength of a love “that lowers itself” and “assumes the condition of a servant.”

Jesus, he continued, “made the cross a bridge toward life” that “also allows us to conquer death with him” by choosing to love others with humility.

“It is a love that does not cry out and does not impose itself, but knows how to wait with trust and patience because, as we were reminded in the Book of Lamentations, ‘It is good to wait in silence for the Lord to save,'” he said.

In remembering the cardinals and bishops who have passed away this year, the pope said that the faithful are called to reflect not on what serves their needs, but rather what serves the needs of others.

Christians, he said, are “not called to be officials who perform services, but beloved children who give their lives for the world.”