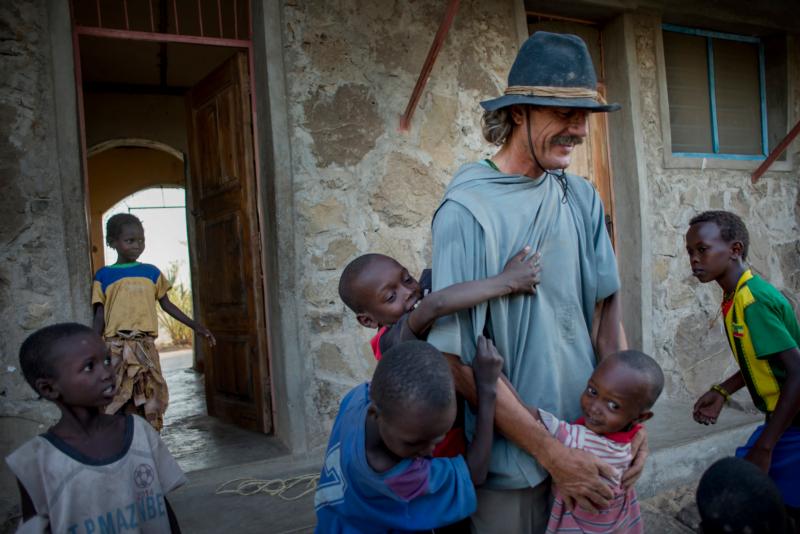 Benedictine Father Florian is greeted by children in early August after returning to Illeret, Kenya, from a trip to Nairobi. The Bavarian prince gave up his inheritance to become a Benedictine monk. (CNS/Christena Dowsett)

ILLERET, Kenya (CNS) — Benedictine Father Florian’s fingers guided a key into the ignition of an old, beat up, Russian off-road vehicle. With a smile on his face, eyes squinting against the sun, he turned the St. Christopher keyring and took off with a pile of smiling children.

Father Florian had just announced that he would be driving down to Lake Turkana for a swim and, like a pied piper, his words were met with an onslaught of children begging for him to take them along.

The Benedictine monk was born Prince Franz-Josef of Bavaria in 1957 and said that, despite his royal heritage, he and his six siblings had a normal childhood. He recalled sitting behind his grandfather, surrounded by his favorite toys, listening to the stories of a family friend who was a missionary in Papua New Guinea. This experience was what sparked his interest in becoming a missionary.

He took his vows at St. Ottilien Archabbey, where he adopted the Benedictines’ unofficial motto, “Ora et Labora” or “Pray and Work.” This has become his mantra for his time with Kenya’s ethnic Daasanach community, one of the smallest tribes in Kenya. More than 10 years into his time with them, he has seen many small changes create good things.

He first came to Illeret in 2002 with the hope of turning the outpost mission of the Diocese of Marsabit into a parish of its own. The now established St. Peter the Fisherman Parish sits on a small hill overlooking the town and boasts a distant view of Lake Turkana.

The priest has helped install the town’s new water system. He has helped build a mechanic’s garage, take care of the poor and send boys to school, but Father Florian is adamant that he does not give handouts. 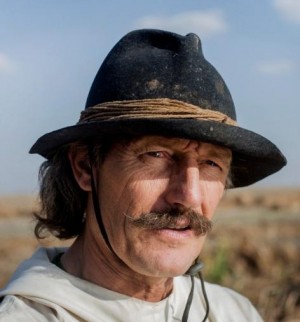 “What’s the problem, why did it happen and how can I fix it?” Father Florian asked in reference to fixing the cars in his garage. He said he is especially proud of the garage, where those passing by can receive assistance while traveling. Illeret is almost a full day’s drive from the next-closest town.

While he’s been able to find solutions to some problems, Father Florian noted that an ingrained issue affecting the community is alcohol. Culturally, one is expected to assist any relative that comes and asks for help, so many find it better to drink their money rather than give it away to a relative who needs it.

“Alcohol is an equalizer between classes,” Father Florian added. “The hope is in the younger generation, but it’s also possible they will slip into (alcoholism).”

He said community members feel trapped from all sides. The consistent fighting with neighboring tribes is a source of great conflict to the Daasanach, who claim they are underrepresented in county government, where most elected positions are held by a neighboring tribe, the Gabra.

“We speak to them with our hands” said community elder Yierat Loins, motioning like a gun, “because no one (in government) speaks for us.”

Loins said a main factor in the fighting between the communities is lack of grazing land and water for their livestock. Loins said he remembers that, when he was a young man, there was regular rain and plenty of grass for the animals to eat.

During one period of severe drought, Bishop Peter Kihara Kariuki of Marsabit said the region depended on help from nongovernmental organizations and the church.

“It has practically not rained in three years,” the bishop said in 2010. “The little water that is collected is not potable. The people have to use drinking water sent by the government with a tank, at several distribution points. There are people who have to travel dozens of kilometers to get water.”

While the situation is not currently as dire as that picture depicts, these words will probably be recycled again in the future.

Amid the community problems, Father Florian houses several boys at the mission; one of them is Loins’ nephew.

Loins said he believes that helping with his nephew’s education is one of the best things Father Florian could do for him. While he knows that the war is unlikely to stop soon, he acknowledges that the reason the opposition has the upper hand is because of education. 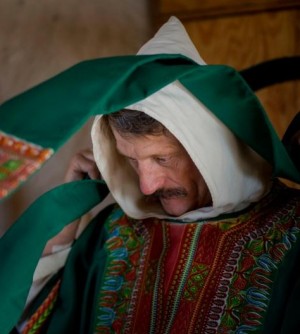 Benedictine Father Florian puts on his vestments as he prepares for Mass in late August in Illeret, Kenya. (CNS/Christena Dowsett)

“Now we have learned their tactics, and we are using their tricks against them by putting our own children into school,” Loins said. “We have lost hope in terms of survival, but what else can we do? Our only hope is to take them to school.”

Father Florian spoke of the delicate relationship between relief food and the ever-growing dustbowl surrounding the Daasanach. He said he believes that, historically, famine and death were a way of the natural resources replenishing themselves.

The relief food in the area keeps people from selling their animals, which means the land never has time to heal, resulting in the constantly forming desert and a perpetually worse drought every year. Drought response also brings in a lot of money. The same cannot be said for preventative efforts, he said: The region is so remote, few development agencies come.

“This is a problem in the whole northern region in Kenya,” Father Florian said. “The aid organizations help and help, but only do short-term help — not long-term help to prevent recurring drought. They only help symptoms and not the root causes, because those are much more difficult to change.”

One potential solution, he said, is for organizations that give assistance to not just give the food, but to trade it for livestock. If this is done correctly it can help keep people alive and make gains in protecting the environment, he said.

“This is not a desert yet,” Father Florian said as he watched wind carry waves of sand across the horizon. “But it will be soon.”

NEXT: Christians have no right to exclude others, pope says at morning Mass