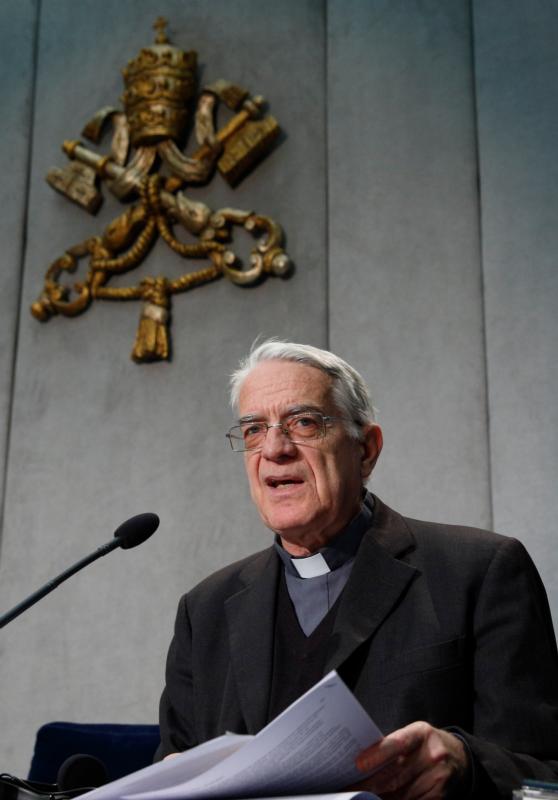 Jesuit Father Federico Lombardi, papal spokesman, is pictured during an Oct. 26 press conference at the Vatican. Investigations into money laundering, insider trading and market manipulation through a Vatican office were launched after an initial report was filed by the Vatican Financial Intelligence Authority in February 2015, the Vatican spokesman said Nov. 4. (CNS photo/Paul Haring)

VATICAN CITY (CNS) — Investigations into money laundering, insider trading and market manipulation through a Vatican office were launched after an initial report was filed by the Vatican Financial Intelligence Authority in February 2015, the Vatican spokesman said.

Jesuit Father Federico Lombardi, the spokesman, issued a statement Nov. 4 about the investigations involving the Administration of the Patrimony of the Apostolic See. The office, known by its Italian acronym APSA, handles the Vatican’s investment portfolio and its real estate holdings.

The Vatican spokesman’s statement comes on the heels of a report by the British news agency Reuters that Giampietro Nattino, chairman of a private Italian bank, had accounts at APSA and used them for personal trades on the Italian stock market.

The Reuters article says investigators looked at Nattino’s activities between May 22, 2000, and March 29, 2011. The investigations revealed that the Italian banker transferred more than 2 million euros out of his APSA account to a Swiss bank account several days before stricter financial regulations at the Vatican went into effect, Reuters reported.

The report also states that the Vatican Financial Intelligence Authority passed its findings on to Vatican City State judicial authorities regarding Nattino’s activities and recommended the Vatican prosecutor, Gian Piero Milano, also investigate possible involvement by some members of the APSA staff.

Although APSA in 2012 told investigators from “Moneyval” — the Council of Europe’s Committee of Experts on the Evaluation of Anti-Money Laundering Measures and the Financing of Terrorism — that the Vatican decided in 2001 to phase out individual accounts, the Vatican’s internal investigation revealed that accounts like Nattino’s were active until 2009.

Father Lombardi said the Vatican prosecutor’s office requested the involvement of Italian and Swiss judicial authorities in the investigation “by requests sent through diplomatic channels on Aug. 7, 2015.”

NEXT: Pray and work: Benedictine uses motto to help people in northern Kenya