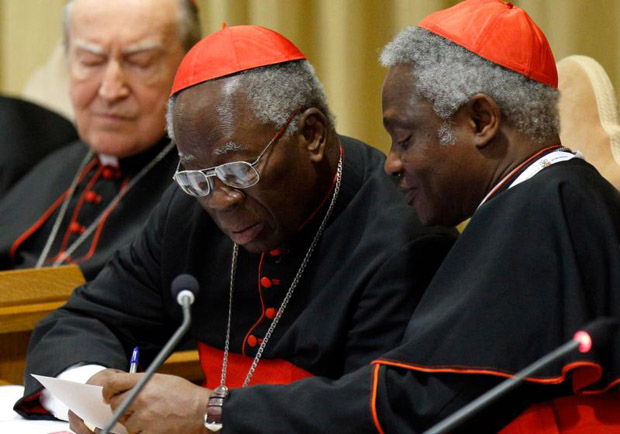 Nigerian Cardinal Francis Arinze, retired prefect of the Congregation for Divine Worship and the Sacraments, center, discusses a document with Ghanaian Cardinal Peter Turkson, president of the Pontifical Council for Justice and Peace, during a conference on "Gaudium et Spes" at the Vatican Nov. 5. At left is Cardinal Andrea Cordero Lanza di Montezemolo. (CNS photo/Paul Haring)

VATICAN CITY (CNS) — A group of young adults from North and South America, Europe, Africa and Asia received scrolls commemorating the 50th anniversary of the Second Vatican Council’s Pastoral Constitution on the Church in the Modern World; dangling from the ribbon around each scroll was a flash drive containing the entire text of the document.

At the Vatican Nov. 5, the document was handed on to a new generation by: Nigerian Cardinal Francis Arinze, 83, a member of the council; Swiss Cardinal Georges Cottier, 93, an expert at the council; Alain Delaunoy, 89, an expert on financial matters at the council; and Cardinal Andrea Cordero Lanza di Montezemolo, 90.

(Read about Bethany Welch of South Philadelphia who represented the United States at the gathering.)

In his “testimony” to the young people, Cardinal Montezemolo explained that he was not at the council, but half a world away. He was secretary of the Vatican nunciature in Japan in 1964. Just before the third session of the council began that fall, he opened a copy of the Vatican newspaper, L’Osservatore Romano, and saw a headline that Blessed Paul VI had decided to name some women as council observers.

“I remember saying to myself, ‘Now women are even entering the council!'” he told the young people in a tone that did not convey complete approval. “Then I read the names and the first woman mentioned was my mother!”

The cardinal said he wrote his mother a letter congratulating her, but adding, “I don’t know if I should greet you as ‘dear mama’ or ‘your eminence’ or ‘most reverend excellency.'”

Amalia di Montezemolo led an Italian association, made up mostly of widows like herself, who worked with the country’s military ordinary providing spiritual and material assistance to members of the military and their families. The cardinal said his mother did not speak much about her experience at the council because she felt bound to secrecy.

The Pontifical Council for Justice and Peace gathered Cardinal Montezemolo and the others as firsthand witnesses to the council and to speak specifically about the pastoral constitution, which is widely known by its Latin title “Gaudium et Spes.” Their “testimony” kicked off a two-day meeting of experts in Catholic social teaching and young Catholics to discuss the ongoing relevance of the council document.

Oblate Father Andrew Small, director of the Pontifical Mission Societies in the United States, told participants that the document presents the church’s mission as healing the world’s wounds through evangelization and its work for justice and peace. The mission requires recognizing the dignity and responsibility of laypeople, who are called to exercise their vocation in the world, and reading “the signs of the times” in order to respond to God’s call and meet real needs.

Cardinal Arinze, who was ordained a bishop in 1965 only two weeks before the start of the council’s last session, said his only contribution to “Gaudium et Spes” was “my signature at the end.”

The document has had a huge influence on the church and “its vision of the world,” he said. The church’s concern for the real world and the concrete situation of human beings flows, as the document said, from the fact that Christ became human and lived in the world. While all are called to use their earthly lives to prepare for life in heaven, the document makes clear that Christians should not be “irrelevant citizens” of this world, but active participants in making the world a better place, Cardinal Arinze said.

“Gaudium et Spes” also emphasizes how one’s temporal duties and duties as a citizen are responsibilities to one’s neighbors and to God, the cardinal said. The document insists that laypeople take charge of their “specific apostolate” of bringing the Gospel to bear on politics, social life and the economy.

“Laypeople must not expect from their pastors an answer to every question that arises in matters social, political, cultural,” he said. “The layperson, paying attention to the doctrine of the church and with the aid of the sacraments, takes on his distinctive role or her distinctive role.”

Cardinal Cottier said the document “remains as fresh as it was 50 years ago,” calling Catholics to a spirituality that looks for signs of God’s presence in the world and ways to bring God’s love, justice and healing to situations of confusion, poverty, injustice and conflict.

Delaunoy told the young people he sees a “remarkable continuity between St. John XXIII and Pope Francis,” particularly in their “openness to the world and to seeing all people as brothers and sisters.”

Perhaps the most important impact of the council, he said, was the freedom and responsibility it gave laypeople. Although not all the results have been positive, the church at the Second Vatican Council encouraged all Catholics to pray, to read Scripture, to understand church teaching and to apply it in their lives.

Religion was more a matter of “convention than conviction,” he said. Today young people are questioning and searching; those who arrive at faith, Delaunoy said, will be better Christians and more able to help the world around them. 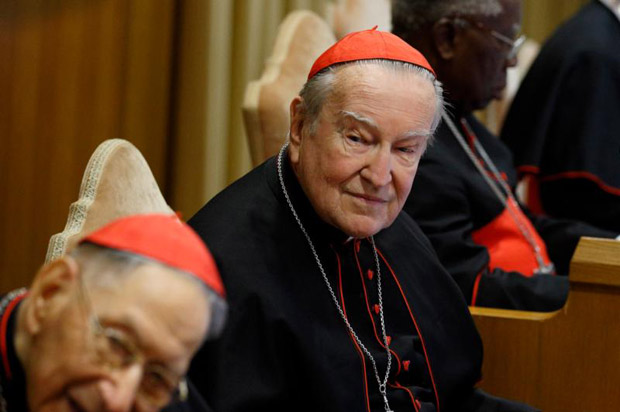