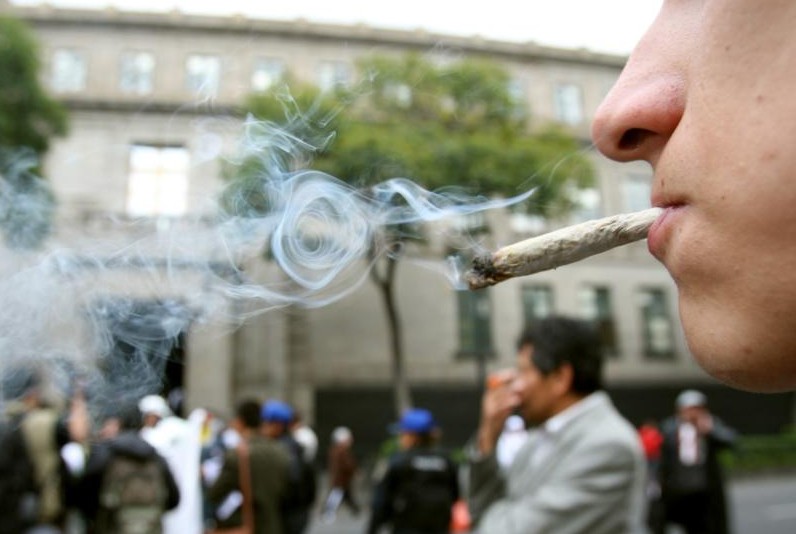 A man smokes pot during a demonstration in front of the Supreme Court in Mexico City Oct. 28. Catholic officials have condemned a Mexican Supreme Court ruling on recreational marijuana use, which they say could put the country on the path to legalization. (CNS photo/Mario Guzman, EPA)

MEXICO CITY (CNS) — Catholic officials have condemned a Mexican Supreme Court ruling on recreational marijuana use, which potentially puts the country on the path to legalization.

The court’s first bench voted 4-1 Nov. 4 in favor of an injunction that allows four individuals to grow and consume marijuana for recreational purposes. Though the ruling only applies to four people, proponents of legalization says they plan to pursue similar injunctions — which would allow them to make marijuana legal for all Mexicans.

“For the church, this is a serious decision and an incredibly irresponsible decision that follows certain fads, a certain mentality of individual freedom superior to social well-being,” said Father Hugo Valdemar Romero, spokesman for the Archdiocese of Mexico City.

The court case moves Mexico closer to places where marijuana decriminalization is gaining ground, such as Uruguay and some U.S. states.

The trend is causing concern for the Catholic Church, and Pope Francis has rebuked the decriminalization of drugs as dangerous and doing little to stop addictions, while not addressing underlying issues or propose solutions like education and accompaniment.

The decision comes as Mexico has confronted violence and crime from a crackdown on drug cartels that has cost an estimated 100,000 lives over the past decade. Proponents say consumption and violence are unrelated, while a study from the Center for Research and Training in Economics found roughly 60 percent of prisoners were locked up for drug offenses.

Father Valdemar, who expressed frustration with the courts deciding contentious social issues, said he did not think legalization was “appropriate” for a country consumed with such insecurity and poverty.

“In Mexico, we have a problem in which more than 50 percent of the population is poor. … It’s opening to the doors to a population that is not very prepared,” he added. “I think it’s an error that they’re legislating as if we were a country in Europe or in the United States.”

Others in the church saw the case as a sign of permissiveness permeating Mexican society.

“We live in a culture of permission and we can’t stop it,” Archbishop Rogelio Cabrera Lopez of Monterrey said in comments published by news agency Quadratin. “Parents themselves can’t contain their children. We are in a society that wants permission for everything.”

In its ruling, the court accepted arguments that prohibiting marijuana violated the concept of “free development of the personality” and, while potentially harmful, the penalties were excessive and disproportionate.

The Mexican government responded to the ruling by saying health laws prohibiting marijuana use remain intact. President Enrique Pena Nieto, who has showed a lack of enthusiasm for liberalizing marijuana laws, said he welcomes “an ample debate” on the issue.

“It’s a big step forward, the mere fact that we’re having this discussion,” said Leopoldo Rivera, publisher of the cannabis-themed magazine, Canamo Mexico. “What’s being addressed are the rights of the users, that citizens have the right to use it, in spite of their individual motives.”

The strategy of trying to win five consecutive court cases and establishing jurisprudence as a way to legalize marijuana appears similar to the strategy that led to same-sex marriage licenses becoming obtainable in all parts of Mexico.

It’s a strategy causing concern for some in the church, who accuse Congress of usurping the role of Congress.

“The big worry is that it’s a debate that should take place in Congress, where citizens are represented, and not in an arbitrary decision, in a decision making it appear the court has turned into a super-national power that decides things (that) go beyond what the legislators representing the population can,” Father Valdemar said.

A poll published in October by the firm Parametria shows 77 of Mexicans oppose legalization of marijuana, though the level of opposition has decreased in recent years.

NEXT: Pope thanks pro-life movement for following example of good Samaritan