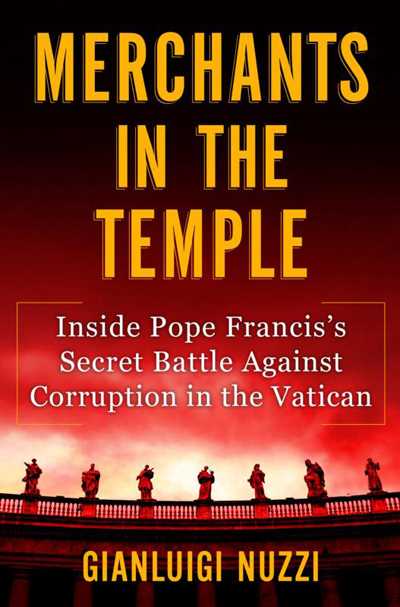 This is the cover of “Merchants in the Temple: Inside Pope Francis’ Secret Battle Against Corruption in the Vatican,” by Italian investigative journalist Gianluigi Nuzzi. The book is based on leaked documents. (CNS photo)

VATICAN CITY (CNS) — Financial wrongdoing at the Vatican, leaked documents and arrests by the Vatican police may make it seem like 2012 all over again, but the situation — while serious — is not the breach of papal privacy that the earlier “VatiLeaks” scandal was.

Gianluigi Nuzzi, the Italian journalist who published documents stolen from Pope Benedict XVI’s private office by his butler, has a new book out based on more leaked documents. “Merchants in the Temple: Inside Pope Francis’s Secret Battle Against Corruption in the Vatican,” was scheduled for release in English Nov. 5.

Another book, Emiliano Fittipaldi’s “Avarizia” (“Greed”), also is focused on Vatican finances and was scheduled for publication the same day in Italian.

Nuzzi’s book is based largely on confidential documents given to and reports written by members of a temporary commission Pope Francis established in July 2013 — less than four months after his election — to clean up the Vatican’s financial chaos, control costs and eliminate the possibilities for misusing funds. In addition, Nuzzi has what he claims are recordings of Pope Francis discussing the lack of fiscal responsibility and transparency at the Vatican, but he does not claim to have private papal documents like he did in 2012.

In connection with the leak, the Vatican announced Nov. 2 the arrests of two members of that Pontifical Commission for Reference on the Organization of the Economic-Administrative Structure of the Holy See: Msgr. Lucio Angel Vallejo Balda, now secretary of the Prefecture for the Economic Affairs of the Holy See, and Francesca Chaouqui, a public relations expert. They are suspected of releasing confidential documents, which is a crime under Vatican law.

While Msgr. Vallejo remained in custody, Chaouqui was released after being detained a day and a half in a convent; in interviews with Italian media, she insisted she had no part in leaking the documents and claimed Msgr. Vallejo was the one who had the secret recordings of the pope.

Jesuit Father Federico Lombardi, Vatican spokesman, told reporters that while the books did not cause rejoicing in the Vatican, the pope is “serene, he’s a person who knows what he needs to do, who knows there are difficulties in life — it’s not like someone has to explain that to him.”

The pope “doesn’t need the books of Nuzzi or Fittipaldi” to tell him where problems exist in the Vatican, he added. Most of the information in the books was already known publicly, although usually with less detail, Father Lombardi said.

In addition, he said, the information reproduced in Nuzzi’s book was not gathered “against the will of the pope,” but rather was information provided by Vatican officials and collected by a commission the pope himself set up.

The way Nuzzi presents the information, Father Lombardi said, may give the mistaken impression that there is much more corruption in the Vatican than the reform process has indicated. A more objective, serious investigation would better distinguish between the majority of Vatican financial dealings that are above board and those areas “to correct, ambiguities to be clarified (and) real improprieties or illegalities to be eliminated.”

Nuzzi writes, “I have access to thousands of documents, the most significant of which are reproduced in this book. They show the incredible waste of money by the men who govern the church,” but also nepotism, favoritism and a questionable use of money donated for Peter’s Pence.

The author cites figures showing that only about 20 percent of the funds collected in 2012 was used for charity; the rest, he said, went to “the maintenance” of the Roman Curia or to a reserve fund controlled by the Vatican Secretariat of State.

Nuzzi describes the goal of the annual Peter’s Pence collection as being “to bring relief to the poor in fulfillment of the church’s pastoral mission and the goals of Francis,” which is true. However, the Vatican always has said it also funds the Roman Curia, which are the offices designed to help the pope exercise his mission of governing the universal church.

In a statement Nov. 4, Father Lombardi said, “The pope’s works of charity for the poor certainly are an essential aim (of the collection), but it obviously is not the intention of the faithful (who donate) to rule out the pope evaluating for himself the needs and the ways of responding to them in the light of his service for the good of the universal church.”

Twenty years ago, when the Vatican announced it had a budget surplus for 1993 — the first in 23 years — officials said were particularly pleased that they no longer had to use all of Peter’s Pence to cover a deficit in operating expenses. U.S. Cardinal Edmund C. Szoka, the now-deceased president of the Prefecture for the Economic Affairs of the Holy See, thanked contributors at the time and said the funds could now go toward papal charities and other projects.

Nuzzi says the intention of those who passed him documents was to contribute “to flushing out and denouncing the opponents of the revolution of Francis.” And, in fact, the book focuses on the black-robed figures trying to thwart the white-robed pope’s reforms at every turn.

When he announced the arrests of Msgr. Vallejo and Chaouqui, Father Lombardi commented that books like Nuzzi’s create more concern than clarity. He added, “One must absolutely avoid the mistake of thinking that this is a way to help the mission of the pope.”

Pope Francis, Nuzzi says, inherited a situation where, “On the one hand there was total chaos in the management of resources and spending, which was spiraling out of control, with inflated costs, deceptive contracts, and dishonest suppliers dumping obsolete and overpriced products on the Vatican. On the other, cronyism and shady financial dealings prevented change and undermined the policies already adopted by (Pope) Benedict.”

Pope Francis’ response was to gather the heads of Vatican offices, including those overseeing the Vatican bank and Vatican investments, and insist on a major cleanup. Nuzzi says a participant gave him a recording of that July 2013 meeting.

Pope Francis, Nuzzi says, told those assembled, “I am reminded of an elderly parish priest in Buenos Aires, a wise man who was very careful with money. He said, ‘If we don’t know how to look after money, which you can see, how can we look after the souls of the faithful, which you can’t see?'”