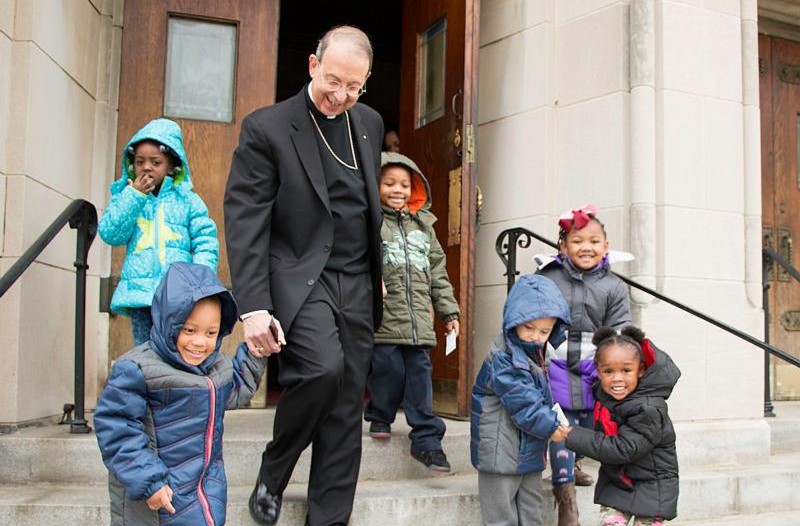 BALTIMORE (CNS) — As he helped distribute 1,000 coats to West Baltimore children Nov. 30, Baltimore Archbishop William E. Lori reflected on the church’s presence in the neighborhood that saw the final arrest of Freddie Gray Jr. and bore the brunt of the unrest that followed his death last spring.

“The church has always been deeply involved in the neighborhoods of Baltimore, especially Sandtown-Winchester,” the archbishop said. “I think the church is intensifying its presence, and that’s what it should do — it’s the path of discipleship.”

The 1,000 coats — donated through the work of the Knights of Columbus, for whom Archbishop Lori serves as supreme chaplain — were distributed to children from Catholic Charities Head Start of Baltimore City, Ss. James and John Catholic School, Holy Angels Catholic School and Alexander Hamilton Elementary School, all in Baltimore.

Children lined up in the parish hall at St. Edward to receive their new coats.

“This event is bringing life to the neighborhood,” said Spiritan Father Honest Munishi, pastor of St. Edward. “We find that people really need this support, especially during the winter.”

Johnetta Richardson, who lives two blocks from the parish and has a boy and girl, both 3, in Head Start, called the gesture “tremendous.”

“It’s a blessing; I’m telling you,” she told the Catholic Review, the news outlet of the Baltimore Archdiocese.

“There’s nothing like a warm coat for the winter, and it means a lot to our families that there are people outside of the neighborhood that support them,” said Mary Gunning, director of Catholic Charities Head Start of Baltimore City.

“We met with Archbishop Lori to talk about something we could do for the city,” Cohen said. “We partnered with him and Catholic Charities to do something specifically for this area after the riots.”

The Knights raised enough money throughout Maryland to purchase 500 coats; their Supreme Council added another 500.

As noted by Archbishop Lori, the coat giveaway is one of several ways the church has intensified its presence in Sandtown-Winchester.

In the summer, the Archdiocese of Baltimore donated $100,000 to YouthWorks, the city’s youth jobs program, providing funding for more than 60 summer jobs.

Catholic Charities has expanded Head Start programs from nine to 15 locations, now serving 700 children and families, up from 267.

A new employment hub, based at St. Edward, will assist local residents in attaining certification to work as automotive technicians, with the goal of placing 50 in jobs in the program’s first year.

William McCarthy Jr., executive director of Catholic Charities, added that St. Edward also has established a food pantry that provides residents with sustenance but also the services of a caseworker, who can help secure other necessities, such as housing.

“All this on this little corner of Poplar Grove and Lafayette,” McCarthy said, noting that he once played basketball as a middle-schooler in the St. Edward gymnasium where the local kids were trying on their new coats.

“Every time I come back here, it just brings back memories,” he said. “West Baltimore has a rich history of Catholic presence, with vibrant parishes and schools, and now the church is evolving to meet the needs of the community.”

In the works is a plan to open a gym to offer structured afterschool activities, McCarthy added.

Archbishop Lori noted that “there are a lot of other things kind of in the offing.”

“They’re on the drawing board now,” he said, “but should be happening soon.”