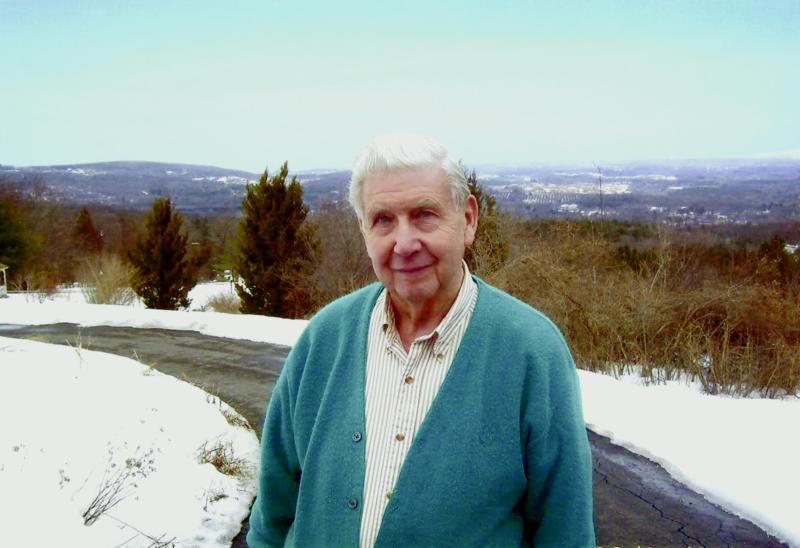 Father Joseph Girzone, a retired priest of the Diocese of Albany, N.Y., who wrote the popular "Joshua" series of novels, died Nov. 29 at age 85 at St. Peter's Hospice Inn in Altamont, N.Y. He is pictured in an undated photo. (CNS photo/Orbis Books)

ALTAMONT, N.Y. (CNS) — Father Joseph Girzone, who became far more prominent in retirement than during active ministry because of his “Joshua” series of novels, died Nov. 29 at St. Peter’s Hospice Inn in in Altamont. He was 85.

A funeral Mass will be celebrated Dec. 12 at St. John the Evangelist Church in Schenectady with Bishop Edward B. Scharfenberger of Albany as principal celebrant.

Father Girzone, a priest of the Diocese of Albany, retired from active ministry in 1981 because of a heart ailment.

After retiring, he picked up his pen and wrote “Joshua,” which was published in 1983. It was a success, selling tens of thousands of copies in hardcover before a paperback edition was issued.

The premise of “Joshua” and several novels that followed in the series is that Jesus comes back to earth disguised as itinerant carpenter Joshua, distilling simple wisdom and challenging the prevailing order on a variety of issues so that the books’ characters can get closer to God.

He told Catholic News Service in a long-ago interview that he wrote “Joshua” to heighten awareness that the church will “lose more of our people if we don’t show more gentleness.” “Christ was the good shepherd — he used to bring people home, not drive them away,” he said.

Some objected to the character Joshua’s questioning of church policies, he told CNS, but those who read his books carefully find they are “not attacking the church but the way it’s run,” he added.

Father Girzone did not restrict himself to fiction. He also wrote “Jesus, His Life and Teachings: As Recorded by His Friends Mathew, Mark, Luke and John,” “Joey” and “My Struggle With Faith.”

Even before the 20th century was over, his books had sold more than a million copies. One estimate of the total books sold under Father Girzone’s name has been put at 3 million.

He used the royalties from his books to establish Joshua Mountain Ministries in Altamont in an effort to get people to learn more about Jesus.

In talks around the country to promote his books, Father Girzone regularly said most people fail to remember that Jesus also was fully human. In one such talk in 1998 in Washington, he said he wanted people to know that the son of God “didn’t come off as someone who was self-righteous but as a person who was free and joyful and happy and had tremendous love and compassion for others.”

Hollywood even made a movie based on the novels. The G-rated “Joshua” bowed in 2002 starring Tony Goldwyn, currently featured as the U.S. president in the ABC drama “Scandal,” as Joshua, with F. Murray Abraham, Kurt Fuller and Colleen Camp co-starring.

Father Girzone, who agreed to take no pension or health care from the Albany Diocese as a condition of his early retirement, started his own publishing company because no book publisher liked his concept of Jesus returning in today’s society and making an impact. After the initial success of “Joshua,” Doubleday signed him to a contract and gave him million-dollar advances, he told the Albany Times-Union in a 2011 interview.

But as the publishing industry changed, Father Girzone became one of its casualties. Doubleday dropped him after 2007’s “Joshua’s Family.” He donated the 21-room house he had been living in, with its 100-acre spread and $26,000 annual heating bill, to his foundation and moved to an apartment above the manor’s garage.

Father Girzone then wrote for Orbis Books, a Catholic publishing house in Maryknoll. The last book published during his life was “Stories of Jesus: 40 Days of Prayer and Reflection,” which was released in late 2013.

NEXT: Church spreads warmth in Baltimore neighborhood with 1,000-coat giveaway