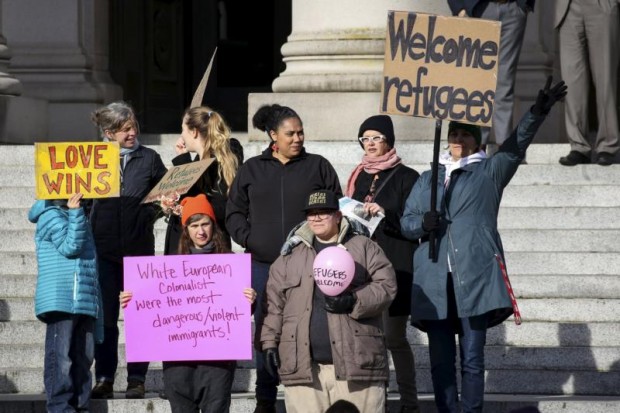 WASHINGTON (CNS) — In response to suggestions made by some Republican presidential candidates in the wake of the terror attacks in Paris and San Bernardino, California, that the United States refuse entry to Muslim refugees or that U.S. mosques be surveillance targets, several religious leaders have rejected the idea.

“We underplay the fact that the pregnant Mary and her husband, Joseph, were turned away from the inn. We forget the slaughter of the Holy Innocents — and that the infant Jesus was spared their fate only through the hurried flight into Egypt where the Holy Family lived for years as what today we would call ‘political refugees,'” said Archbishop Thomas G. Wenski of Miami in a Dec. 13 op-ed article in the Miami Herald.

“Today there are more than 60 million refugees and internally displaced persons living in our world — the greatest number since the end of World War II. Close to one-third of these people are from Syria and Iraq. And most are surviving in desperate circumstances. And, truth be told, many fail to survive at all,” Archbishop Wenski added. “Yet, in spite of this profound human suffering, many here in our country would shut our doors in the faces of those looking for a safe haven.”

“We cannot give in to our fear and retreat into the mindset of a ‘fortress America,'” he said.

“The Holy Father, Pope Francis, has opened the Holy Door of Mercy, not only for Catholics but for Christians, Muslim, Jews, and all people of faith,” said Bishop Jaime Soto of Sacramento, California, president of the California Catholic Conference, in a Dec. 11 statement. The conference is the public policy arm of the state’s Catholic bishops.

“We are beckoned by God to the threshold of his mercy. He is the one who sends us to spread this awesome mercy by holding the hands and wiping the tears of those ravaged and worried by the demented perpetrators of a violent culture. He has given us the light of his truth in order to dispel the harsh gloom of dubious stereotypes or vicious prejudices,” Bishop Soto added.

“Some who are ignorant, who have closed their hearts and ears, have hijacked both the Christian and Muslim faith traditions by preaching hatred and promoting violence, thus acting against the Word of God,” said a Dec. 16 joint statement by Franciscan and Muslim leaders. “In 1928, Adolf Hitler said: ‘We tolerate no one in our ranks who attacks the ideas of Christianity. Our movement is Christian.’ Adolf Hitler no more represented Christianity in 1928 than Daesh represents Islam today,” the statement said, referring to a name given by some to the Islamic State.

“We join other faith-based organizations in decrying current rhetoric that is contrary to our religious traditions, scriptures, and values,” the statement added. “Welcoming the stranger is called for in our scriptures. The rhetoric of exclusion, religious testing, hatred and violence is also anti-American. Whether shouted from the rooftops or more subtly expressed, especially by candidates for public office and legislators, such language is both morally abhorrent and dangerous for maintaining our identity as United States citizens. History has shown us that whenever we dehumanize a group of people whether through our words or actions it could lead to war or terrorism.”

Russell Moore, president of the Southern Baptist Convention’s Ethics and Religious Liberty Commission, criticized Donald Trump’s call for “a total and complete shutdown of Muslims entering the United States” in a Dec. 7 essay, terming it “reckless, demagogic rhetoric” and an affront to religious freedom.

“As an evangelical Christian, I could not disagree more strongly with Islam. I believe that salvation comes only through union with Jesus Christ, received through faith,” Moore wrote. “It is not in spite of our Gospel conviction, but precisely because of it, that we should stand for religious liberty for everyone.”

The chairman of the South Carolina Republican Party, Matt Moore — no relation — agreed with Russell Moore. “If we have a central government or federal government or a president that can unilaterally close a mosque, they can also close a synagogue or a church,” he told National Public Radio’s “All Things Considered” Dec. 8. “And a government or leader who can keep out Muslims can unilaterally keep out Jews and Christians. And what kind of precedent are we setting?”

“We must categorically condemn the ideology that terrorists propagate and instead promote a pluralistic mindset with clarity and confidence. After all, before our ethnic, national or religious identity comes our common humanity, which suffers a setback each time a barbaric act is committed,” said Fethullah Gulen’s op-ed article in the Dec. 16 issue of Le Monde, the French national daily. Gulen is honorary president of the Rumi Forum, an Islamic interfaith dialogue association named for 13th-century philosopher-poet Mawlana Jalaladdin Rumi, who hailed from the Sufi mystic branch of Islam.

“I share a profound frustration with a billion and a half Muslims around the world at the fact that such groups commit terror while dressing up their perverted ideologies as religion,” Gulen said, adding Muslims must “reject and avoid conspiracy theories, which have so far only helped us avoid facing our social problems.”

PREVIOUS: Immigration opposition: My country, ’tis of me, but no room for thee