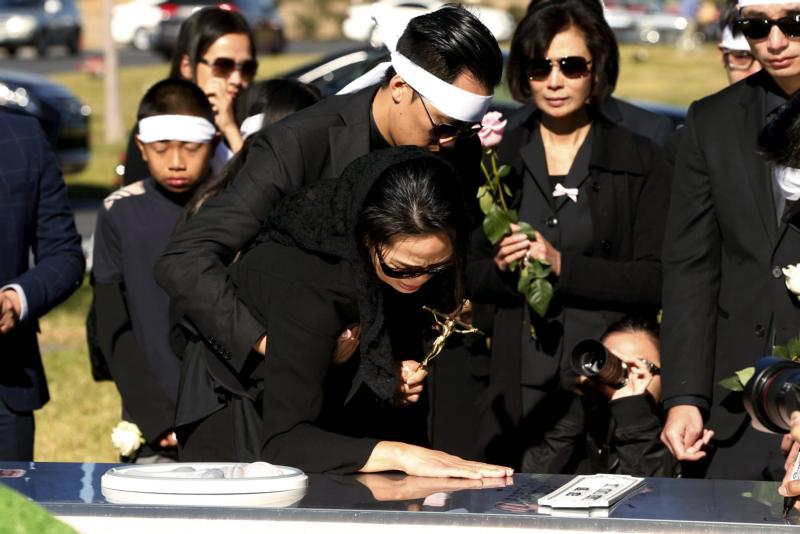 Van Thanh Nguyen touches the burial vault of her daughter, Tin Nguyen, during her Dec. 12 burial at Good Shepherd Cemetery in Huntington Beach, Calif. Nguyen was one of 14 victims killed in a Dec. 2 mass shooting at a social services center in San Bernardino. (CNS photo/Patrick T. Fallon, Reuters)

WASHINGTON (CNS) — Violence and hate in the world “must be met with resolve and courage,” said Archbishop Joseph E. Kurtz of Louisville, Kentucky, who is president of the U.S. Conference of Catholic Bishops.

As Catholics and other Christians anticipate “the miracle of Christmas,” announcing the need for peace and goodwill throughout the world this “blessed season of Advent,” he said, calls for “even stronger voices” this year in light of the mass shootings in San Bernardino, Calif.

“We pray that family and friends facing the pain of loss and the journey of recovery find strength in the compassion of their community,” Archbishop Kurtz said in a Dec. 14 statement. “We draw especially close to the local church, which has borne the burden of mourning the loss of those who died and of comforting their families, yet has the strength to reach out in love.”

On Dec. 2, in what the FBI and other law enforcement officials have termed a terrorist attack, Syed Rizwan Farook, 28, and his wife, Tashfeen Malik, 29, shot up a county social services center in San Bernardino with assault rifles. Fourteen people were killed and another 21 were injured.

Farook and Malik died in a shootout with police a couple of hours after they attacked the center.

As authorities continued to investigate the motives of the shooters and whether they were part of a terror cell, funeral services were held for at least three of those shot dead by the couple, including Tin Nguyen, whose funeral Mass was celebrated Dec. 12 at St. Barbara Catholic Church in Santa Ana, Calif.

In his statement, Archbishop Kurtz also pointed to the Nov. 27 shootings at a Planned Parenthood abortion clinic in Colorado Springs, Colorado, during which a police offer was shot dead along with two civilians.

Alleged shooter Robert Lewis Dear was arrested and charged with the killings. In an outburst during his first appearance in court Dec. 9, Dear said he was “a warrior for the babies.”

“Here, too, the Christmas story inspires us to give of ourselves, as Jesus gave up his body, so we may bring comfort and joy to those in need,” Archbishop Kurtz said. “We must not respond in fear. We are called to be heralds of hope and prophetic voices against senseless violence, a violence which can never be justified by invoking the name of God.”

“Watching innocent lives taken and wondering whether the violence will reach our own families rightly stirs our deepest protective emotions,” he added.

Archbishop Kurtz also responded to the wave of anti-Muslim rhetoric that has followed the San Bernardino shootings. One of the prominent voices in that sentiment has been Republican candidate Donald Trump, who has called for temporarily stopping the admission of Muslims into the United States.

His remarks have been roundly criticized by his fellow GOP candidates, the GOP leadership in Congress, the Democratic candidates for president and a huge number of leaders of all religions.

Archbishop Kurtz urged all people of goodwill to “resist the hatred and suspicion that leads to policies of discrimination.”

“Instead, we must channel our emotions of concern and protection, born in love, into a vibrant witness to the dignity of every person,” he continued. “We should employ immigration laws that are humane and keep us safe, but should never target specific classes of persons based on religion.

“When we fail to see the difference between our enemies and people of goodwill, we lose a part of who we are as people of faith,” Archbishop Kurtz said. “Policies of fear and inflammatory rhetoric will only offer extremists fertile soil and pave the way toward a divisive, fearful future.

The USCCB, he said, “remains steadfast in our commitment to refugees, who are often escaping severe persecution.”

“We will continue to support strengthening social services for persons with mental illness, but we must remember that only a small number of those suffering with these challenges pose a risk to themselves or others,” Archbishop Kurtz said. “We encourage responsible firearms regulation. And we will advocate on behalf of people facing religious discrimination, including our Muslim brothers and sisters.”

He said the extremist threat must be confronted “with courage and compassion, recognizing that Christianity, Islam, Judaism and many other religions are united in opposition to violence carried out in their name.”

Elsewhere in the country, Archbishop Allen H. Vigneron of Detroit echoed many of comments of Archbishop Kurtz regarding the treatment of Muslims.

He shared with the priests of the archdiocese a letter he wrote to the Imams Council of Michigan.

“In light of a public proposal put forth recently to restrict the immigration of Muslims into the United States based on their religion, I thought it would be helpful to remind everyone of the Catholic teaching regarding Islam,” he wrote.

“Fifty years ago, the fathers of the Second Vatican Council taught that the Catholic Church treats with respect those who practice the religion of Islam. And for these past 50 years, Catholics and Muslims in southeastern Michigan have enjoyed warm relations marked by a spirit of mutual respect and esteem.”

Archbishop Vigneron said the Catholic Church “refrains from weighing in for or against individual candidates for a particular political office,” but that the church “does and should speak to the morality of this important and far-reaching issue of religious liberty.”

It is important the current political discourse address “the very real concerns about the security of our country, our families and our values,” he said. However, “we need to remember that religious rights are a cornerstone of these values,” he added.

“Restricting or sacrificing these religious rights and liberties out of fear — instead of defending them and protecting them in the name of mutual respect and justice — is a rationalization which fractures the very foundation of morality on which we stand,” Archbishop Vigneron said.

Such a proposal “also threatens the foundation of religious liberty that makes it possible for us to freely practice our faith. These are not only Catholic sentiments on these issues; these, I believe, are the sentiments of all Americans.”