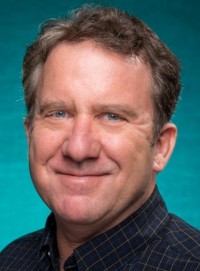 Poet Michael White, pictured in an early June photo, chronicles his yearlong transcontinental quest to see all the known paintings by the Dutch master Johannes Vermeer in his memoir, “Travels in Vermeer.” (CNS photo/Jeff Janowski, UNCW)

CAMDEN, N.J. (CNS) — After his parents divorced, Michael White briefly lived with his mother, but she would regularly make him ask his father to “take” him.

“She’d dial his number,” he recalls, “then hand over the heavy black receiver. He always said: ‘Tell her no.'”

So, when Michael turned 13, his financially struggling mother simply dropped him off outside his father’s house and left him there, speeding away despite his protests. His father wasn’t home and the boy sat on the curb for hours waiting for him.

Now an established poet and professor at the University of North Carolina at Wilmington, White recounts this episode from his childhood in his recently published memoir, “Travels in Vermeer.” The slim volume, in which he chronicles his yearlong transcontinental quest to see all the known paintings — fewer than three dozen — by the Dutch master Johannes Vermeer, has met with critical praise, even landing on the prestigious “Editor’s Choice” list in The New York Times Book Review.

In addition to his Vermeer quest, White also tells tales of his childhood; his alcoholism (“I was a classic, low-bottom drunk”) and recovery; his experiences with Match.com; his first wife, who died of cancer; and his divorce from his second wife and their bitter child custody battle.

Despite her abandonment of him, White expresses no bitterness toward his mother and even includes some memories that involve her.

Not long after he met Jackie, his first wife, she became ill, and White cared for her through the mastectomies and reconstruction, chemotherapy and radiation, and attempted bone marrow transplant. When they married after several years as a couple, she was frail, walking with a cane and had less than a year to live. She was 41 when she died.

“I had gone there myself as a child for a couple of years, at my recently divorced mother’s somewhat puzzling insistence — no one in my family was Catholic, or had even been baptized,” White explained. “It was still the only church where I’d even remotely felt at home.”

Recalling going to Mass with his mother and siblings and stopping on the way home for cherry phosphates, he writes, “We were never more a family than on those Sunday mornings.”

White’s conversations with a kind nun at the parish led to his attending sessions of the Rite of Christian Initiation of Adults program, being baptized and finding “joy in the process.”

White also writes about the joy he felt on seeing the work of Vermeer, whose paintings include “Girl With a Pearl Earring,” “The Milkmaid,” “View of Delft” and “Allegory of Faith.”

The joy of both experiences was similar, he said in an email exchange with the Catholic Star Herald, newspaper of the Diocese of Camden. “It is the joy that surprises — perhaps joy always surprises — with its power. It is amazing that we have such wellsprings with us and are so unaware of them.”

But while his appreciation of art and his spiritual growth both led to joy, he comes to them differently. Paint on canvas produces an epiphany, even a physical sensation. Viewing “The Milkmaid,” he feels “a shiver all the way up and down my spine.”

In contrast, he describes his spiritual journey as a deliberate and gradual type of conversion experience.

“In AA (Alcoholics Anonymous) this is something that we discuss frequently; it is empowering to understand that we can change our orientation to the world by thought and especially by deed,” he said. “Of course, we are grateful for the gift however it is received.”

White speaks frequently of gratitude. Even in discussing Jackie’s sickness and death, he says that the power of faith can lead to acceptance and “even a kind of gratitude in response to suffering.”

Connecting gratitude and suffering may sound contradictory but White, a poet, expects no less from a life of faith. He said he was attracted to Catholicism for several reasons, including the example of Catholic activists he has known and its rich history and cross-cultural appeal. But, he added, “I think ultimately choice of faith isn’t a thought process but a deeper calling.”

And of the childhood church where he sought spiritual comfort and understanding as a man, after years of emotional hardship and sickness and the loss of his wife?

“I still regard that little church with reverence and wonder,” he said. “Often, when I am back in Columbia, I go to Mass there, and sometimes just go in and sit quietly.”

Peters is managing editor of the Catholic Star Herald, newspaper of the Diocese of Camden.