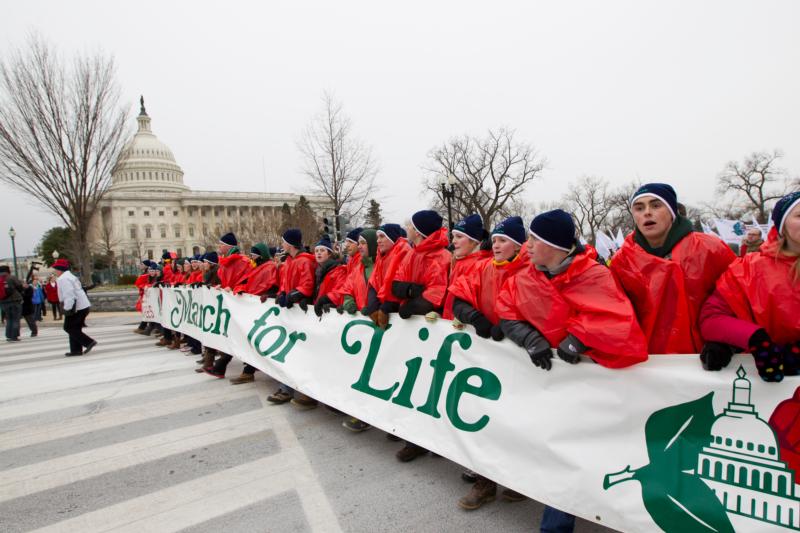 Young people walk with a banner past the U.S. Capitol in 2012 during the annual March for Life in Washington. (CNS photo/Bob Roller)

WASHINGTON (CNS) — The annual March for Life, set for Jan. 22, will convene in a new location in the nation’s capital for the traditional midday rally.

Because of the ongoing refurbishment of the National Mall and strict new regulations that require temporary flooring to protect the grass, the rally has been moved from the West Front of the Capitol to the Washington Monument grounds.

“We were lucky to get that. It’s going to cost us $70,000, and it’s not something we budgeted for,” said Jeanne Monahan-Mancini, president of March for Life. “It’s the most economical wide-open space we could afford.”

Other than the venue, the event, which draws busloads of Catholic parishioners and parochial school students, is expected to remain much the same.

Held since 1974, the march marks the anniversary of the U.S. Supreme Court’s Roe v. Wade decision in 1973, which legalized abortion.

“Pro-Life is Pro-Woman” is this year’s theme.

“We know that abortion takes the life of one and wounds the life of another, so we always try to emphasize … that there’s always hope and healing for anyone who’s made that sad decision, and it’s very important in terms of our messaging,” Monahan-Mancini told Catholic News Service.

It’s also intended as a way to blunt critics, “because of the (presidential) election and a lot of the rhetoric about the false ‘war on women,'” Monahan-Mancini added.

Retired Baltimore Ravens football player Matt Birk is the headline speaker at the rally and that evening’s Rose Dinner. Monahan-Mancini said she expected at least a couple of Republican presidential candidates to speak at the rally as well, but that any announcement would come just before the event.

The day before the march, Father Frank Pavone, national director of Priests for Life, will lead a prayer rally at the Planned Parenthood offices in Washington. A youth rally at the Renaissance Hotel follows.

Other march-related activities include a Mass opening the overnight National Prayer Vigil for Life at the Basilica of the National Shrine of the Immaculate Conception Jan. 21 and a Mass the next morning at the Basilica; a Mass and interdenominational prayer service at Constitution Hall prior to the march; and two similar events, Youth Rally and Mass for Life, sponsored by the Archdiocese of Washington at the Verizon Center and the D.C. Armory.

Kansas Gov. Sam Brownback will be honored at the Constitution Hall event for being the first governor to sign the Unborn Child Protection from Dismemberment Abortion Act. The legislation is under review in a state appeals court.

Two recent events loom over this year’s march. Last summer, an anti-abortion organization in California, the Center for Medical Progress, released a series of secretly recorded videos that it claimed show representatives from Planned Parenthood clinics discussing the use of aborted infant parts for profit. In November, a gunman opened fire at a Colorado Springs Planned Parenthood clinic, killing three and wounding nine. The suspect, Robert Dear, was reported as telling police, “No more baby parts,” in an apparent reference to the videos.

The videos are the subject of litigation in U.S. District Court, Northern District of California, where a judge will decide whether the videos should be permanently suppressed because they violate California laws about secret recordings and also contributed to clinic arsons. Excerpts of the videos remain available on YouTube.

Even in truncated form, they videos have had an effect, said Michael Ciccocioppo, executive director of Pennsylvania Pro-Life Federation, a march participant.

“I haven’t seen every single video from start to finish, but I’ve seen parts of all the videos,” he said. “When you listen to these doctors sitting around eating their lunch, eating their salad, drinking their wine and talking so callously about what they do and how much they can get for these body parts, I mean it really has exposed to the nation how horrendous these things are that are going on.”

Monahan-Mancini agreed that the videos are “very hard to watch.” However, she finds them helpful to the pro-life effort.

“The thing with abortion is, it’s very much in the dark. It’s a violent kind of thing,” she said. “The great gift, regardless if you agree with the (recording) approach, is bringing into the light what happens behind closed doors. It was just so clear that there was a lack of respect for these little babies. They were just objects, objects for material gain.”

As for the Colorado shooter, “That’s their responsibility when people like that act in that way,” Ciccocioppo said. “It’s not the responsibility of the (anti-abortion) movement. This man has nothing to do with us.”

“The truth is going to come out one way or the other,” Father Pavone said. “The safest way to proceed for the vast majority of those involved in the march is through the peaceful, prayerful activities and legitimate avenues of government.”

The poll found that 58 percent of the respondents thought abortion should be legal in most or all cases. That’s an increase from 51 percent who said so at the beginning of 2015. The poll showed equal support among both Democrats and Republicans.

“I don’t think that poll is fair,” Monahan-Mancini said. “And I don’t think it’s reflective of the average American and what they think.”

Reversing the landmark Supreme Court decision remains the long-term goal of the march. But organizers told CNS they prefer to focus on changing the nationwide conversation.

“I think we have a much loftier goal, and that’s to change the hearts and minds of Americans. That no woman, in her right mind, would ever choose abortion. Because we really have a deprived culture when any woman thinks that’s an empowering act,” Monahan-Mancini said.

Ciccocioppo said the challenge to the pro-life movement in its quest to overturn Roe v. Wade is “that the court is still stacked against us.”

“But we’re in this for the long haul. This is going to be going on for as long as it takes,” he said.

“First of all, to recognize the humanity of the unborn child in law,” he continued. “But also, another focus of the march is obviously to help get the truth out there about how abortion harms women physically, emotionally and mentally, and kills living human beings, so we can get the hearts and minds of the culture to really accept the fact that this is killing of little human beings, citizens of our country.”

NEXT: White House strives to clear up misconceptions about religion