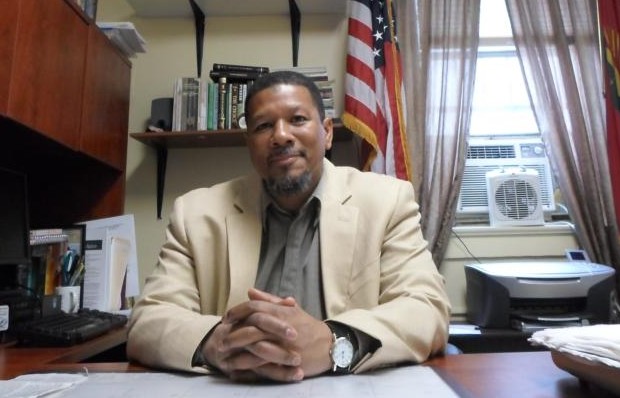 Imam Talib Shareef sits at his desk Nov. 28 at the Nation's Mosque in Washington, an historically African-American Muslim place of worship. Imam Shareef says attacks carried out by Islamic extremists pose a challenge to all people of faith. (CNS photo/James Martone)

WASHINGTON (CNS) — Atrocities committed in the name of Islam reverberate in a historic mosque in Washington.

He made the comments in an interview with Catholic News Service Nov. 28. Two weeks earlier, terrorist attacks, which the Islamic State claimed responsibility for, killed 130 people and wounded hundreds of others in various locations in Paris.

Imam Shareef has condemned the attacks in the French capital in the strongest terms, much as he has similar attacks claimed by Islamic State and other militant groups the imam lamented were tarnishing the image of Islam.

Challenges appear to be something Imam Shareef, now in his mid-50s and retired from a 30-year career with the U.S. Air Force, is used to.

He recounted to CNS how his father had died early, leaving his Methodist mother to raise him on her own. Under the influence of an uncle, he converted to Islam at 17, but struggled to truly understand it until he was in his early 20s and in the military, which at the time did little to accommodate non-Christian beliefs on its bases. So, he and other Muslims colleagues had to fit Islam’s five daily obligatory prayers and a yearly monthlong fasting period into their busy schedules as best they could.

Young Shareef excelled, working his way up the chain of command in the Air Force, while earning university degrees in business administration and in Arabic and Middle Eastern studies along the way. He was ultimately made Muslim chaplain at the various bases he served.

He retired as a chief master sergeant of the Air Force, and soon afterward, in 2010, the community at the Nation’s Mosque asked him to be their imam. He has since taken on a vast array of duties at the historically African-American mosque, including serving the spiritual needs of his roughly 1,500 parishioners, overseeing the mosque’s neighborhood education and charity programs, and engaging in dialogue with other religions.

With the recent increase in deadly attacks and kidnappings linked to the Islamic State and other militant groups, however, Imam Shareef has increasingly found himself tasked with the additional — and often daunting — challenge of distancing the “Islam of peace,” as his community knows and practices it, from that of what he calls a minority of extremists giving Islam a bad name.

Islamic militants “are a threat to all humanity, (and) the things they are doing are the opposite of peace, it’s just evil,” he said.

“Islam has been around a very long time,” he added. “We are 1.7 billion in the world, which is one-third of the population, so look at all these people, and look at this small group of people, very small, that make this big bang, and gets everyone’s attention with these explosions. That is what is happening. This explosion of evil has captivated the world stage.”

He argued that Islam was first brought to America in the 1700s by African slaves, and has existed in this country since, peacefully and charitably, and that it should not be considered something to be afraid of, or something new.

“Leaders can just say, ‘We know (Islamic State) is not Islam, because we got Muslims in America and they have been here for this long, and we know what they are doing, and they are peaceful,'” he suggested, noting that his mosque was currently busy conducting a coat and scarf drive to help the neighborhood’s needy, regardless of faith, keep warm this winter. The mosque also assisted in providing a total of 1,000 turkeys to needy families ahead of the recent Thanksgiving holiday, he added.

“The media can work with us, and not call (Islamic militants) what they want to be called, just because they want to be called that,” he said, addressing U.S. news networks. “You keep saying ‘Islamic,’ but it is associated with something that is negative. These are bad people. They are doing evil; they should be called ‘evil’!”

“What if they called themselves ‘the State of Pope,’ would you call them that?” Imam Shareef continued. “They (the media) wouldn’t call them that, because they know they are not.”

He remarked that he’d recently traveled as part of an interfaith delegation to Rome, where he met with officials at the Vatican’s Pontifical Council for Interreligious Dialogue.

He said he pinned great hopes on Pope Francis as a partner in promoting peace among all faiths, and in combating extremism, which “is a world problem, and everyone has to step up.”

“God blessed us with a pope in the world right now who brings out the best” in all people, he said.