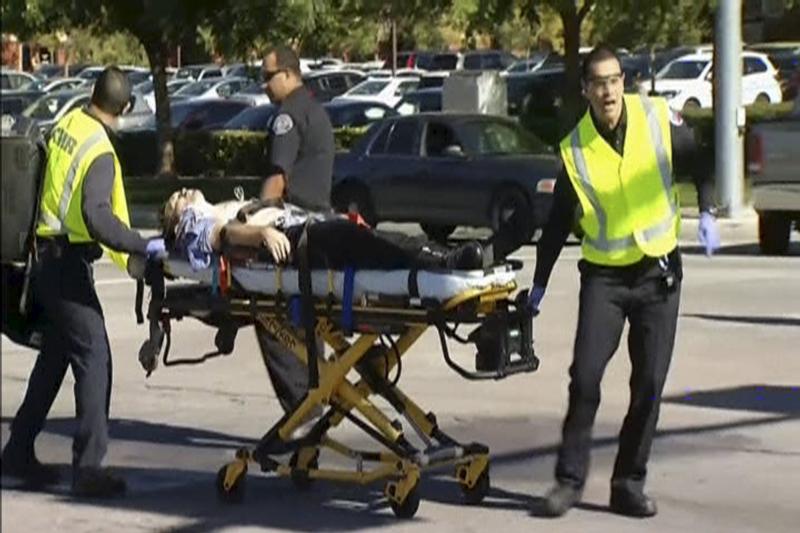 Rescue crews rush an injured victim to a waiting ambulance outside the Inland Regional Center in San Bernardino, Calif., in this still image taken from video Dec. 2. At least 14 people were reported killed and more than a dozen injured when gunmen opened fire that day during a function at a center for people with developmental disabilities, police said. (CNS photo/NBCLA.com/Handout via Reuters)

In a Dec. 2 statement, the bishop called on people to pray for “all of the victims of this horrific incident and their families” and also asked for prayers for law enforcement officers who at the time were still “pursuing the suspects in this case.”

“Our community of San Bernardino has faced great challenges through the years. Let us come together now in unity to bring light to the darkness of this day,” Bishop Barnes said.

The shooting took place at the Inland Regional Center, a state-run facility for individuals with developmental disabilities where county health officials were having an employee holiday party.

Two armed suspects — later identified as Syed Farook, 28, and Tashfeen Malik, 27 — were killed by police four hours later in a shootout about two miles from the social services center.

Farook, a county environmental inspector, had attended the holiday party and left, returning with Malik, wearing “assault-style clothing” with ammunition attached, according to news reports.

Police and federal agents have not yet offered a motive for the couple’s shootings at the center, which provides housing and work programs, and therapy and social services to more than 30,000 people with developmental disabilities.

“Today, yet another American community is reeling from the horror of gun violence,” said House Minority Leader Nancy Pelosi, D-California, said in a Dec. 2 statement.

“As the families of the victims grieve and the survivors focus on healing, the entire American family mourns,” she added.

Pelosi noted that gun violence is “a crisis of epidemic proportions in our nation” and said Congress has a moral responsibility to vote on common sense measures to prevent the daily agony of gun violence in communities across America. Enough is enough.”

Philadelphia Archbishop Charles J. Chaput said “each innocent life lost” in the shooting was precious. “Each was intimately connected through family and friendship to many others, who now survive them and bear a burden of unearned suffering.”

The archbishop, in a Dec. 3 statement, added: “Pursuing justice in this matter is in the hands of law enforcement. Our task as Christians is to pray for those persons whose lives were ended by the inexcusable cruelty of others.”

NEXT: Terrorist attacks pose challenge for all ‘people of faith,’ says imam