At Christmas, Maronite Catholics recall births of Jesus and Muhammad 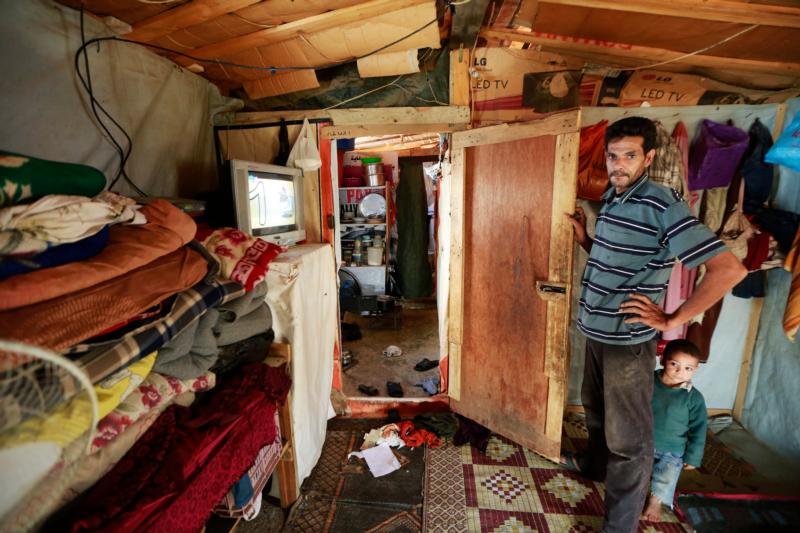 A Syrian refugee stands next to a boy inside his tent in late September at the Faydha refugee camp in Lebanon's Bekaa Valley. In his Christmas message, Lebanese Cardinal Bechara Rai called for the preservation of coexistence and a proper response to the Syrian refugee crisis. (CNS photo/Nabil Mounzer, EPA)

“We extend our wishes today to Muslims and Christians, knowing that this year the celebrations of Christmas and the birth of the Prophet coincide,” said Cardinal Rai, patriarch of Maronite Catholics. Muhammad’s birthday, celebrated using the lunar calendar, was celebrated Dec. 23.

In his Dec. 24 address from Bkerke, north of Beirut, Cardinal Rai also extended “our best wishes to those who suffer from conflicts in Syria, Iraq and the Holy Land.”

“We are determined to perform our duty to confront fanaticism, divisions … and we are keen to preserve coexistence,” he said.

He reiterated his calls for Lebanon’s political blocs to elect a president “as soon as possible” to move the country “from despair and anxiety to hope and peace.”

Lebanon has been without a president since the term of President Michel Sleiman ended in May 2014. Under Lebanon’s power-sharing system, the post is held by a Maronite Catholic.

Cardinal Rai emphasized that the Maronite Patriarchate has given policymakers three documents, “road maps … to build a modern constitutional state, capable and productive, based on a healthy democracy and (which) respects the equality of all its citizens.”

The patriarch insisted that the government “fulfill its functions” regarding the Syrian refugee crisis, pointing to “the weight” that the presence of 1.5 million Syrian refugees implies for Lebanon, a country about two-thirds the size of the state of Connecticut, with an existing Lebanese population of nearly 4 million.

“We stand at the humanitarian level with our refugee brothers,” the patriarch said, but warned that Syrian refugees in Lebanon could be exploited by terrorists or extremist groups to ignite unrest and instability in the country.

The patriarch welcomed a U.N. Security Council resolution that endorsed a road map for a peace process to end the nearly five-year-old Syria war, but disagreed with its recommendation for a “voluntary” return of refugees.

“We do not accept the term ‘voluntarily’ because these refugees must return home,” he said.

Lebanon absorbed an influx of Palestinian refugees more than 60 years ago. Currently, there are about 500,000 Palestinians in Lebanon.

PREVIOUS: Only mercy can free humanity from evil, pope says