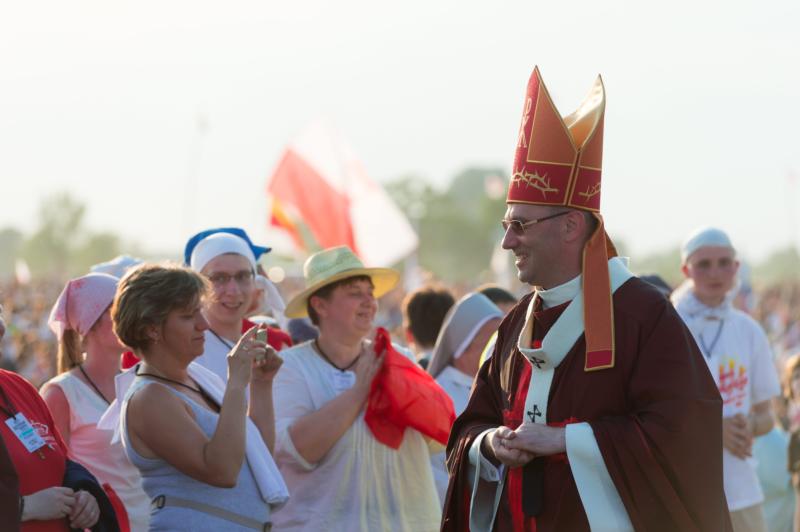 GNIEZNO, Poland (CNS) — Poland’s Catholic primate said Pope Francis has not broken from the teachings of St. John Paul II and that the Latin American pontiff understands “pastoral realities” as he reshapes the church’s evangelical outreach.

In light of the pope’s efforts, the Polish bishops have a duty to recall Christian values often forgotten by the rest of the church, and to “adjust” the teachings of Pope Francis to fit their own pastoral programs, Archbishop Wojciech Polak of Gniezno told Catholic News Service.

“It isn’t a question of opposing someone else’s position or defending particular values for their own sake, but rather of interpreting the unchanging summons of the Gospel in a deeply evangelical way for the present times,” Archbishop Polak explained.

“We are showing faithfulness to what our church has always proclaimed, latterly under St. John Paul II, and recalling that solutions must be sought to current problems with a deep awareness of who we are as believers,” he added.

The archbishop spoke with CNS amid preparations for next spring’s 1,050th anniversary of Poland’s Christian conversion, which will be followed by the visit of Pope Francis to World Youth Day, set for July 26-31.

Archbishop Polak said the Polish Catholic Church would use the 2016 events to highlight Christianity’s continued importance in shaping social life and creating culture in Europe.

“In the multicultural societies of the West, the church has lost its once-dominant role, although Christianity still often shows vitality and strength through small, committed communities,” the archbishop said.

“Secularization is also occurring here in Poland, and I wouldn’t dare suggest our form of civilization is somehow better,” he continued. “But our church is still gathering most of society, including young people, around Christian religious values.”

The church in Poland makes up at least 90 percent of the population of 38 million and accounts for a quarter of all priestly vocations in Europe, although seminary admissions and church attendance have fallen during the last decade.

The anniversary of the 966 baptism of King Mieszko I in April is expected to be commemorated in a parliamentary resolution as “fundamental to shaping the national identity.”

World Youth Day is forecast to attract as many as 2.5 million young people from around the world, as well as 20,000 priests and 1,200 bishops. The celebration will include a Mass, prayer vigil and Way of the Cross procession, all led by Pope Francis.

However, some media have reported opposition to the pontiff’s stance on issues such as homosexuality and poverty.

Archbishop Polak said the Polish church had “no objection in principle” to the pope’s call for “openness and acceptance toward others.”

However, he added that proposals such as the easing of baptism rules would need “translating into its pastoral program.”

“No Polish priest would be scandalized by the Holy Father’s appeal for us to grant baptism to people living in irregular relationships, for how can a child be blamed for this?” said the prelate, who served as secretary-general of Poland’s bishops’ conference from 2011 to 2014.

“But we demand that such children are brought up in the faith, if necessary by a close relative or someone from the parish community,” he said. “Being patient and tolerant is an expression of mercy. But we should also rationally evaluate the realities we face and try to liberate ourselves from toxic situations.”

Archbishop Polak said the Polish church clearly expressed its view at October’s Synod of Bishops on the family, when its chief representative, Archbishop Stanislaw Gadecki of Poznan, president of the Polish bishops’ conference, argued against allowing civilly remarried divorced people to receive Communion, and “feelings of false compassion” toward “mistaken modes of thought.”

The primate added that Poland’s bishops accepted the pope’s summons to aid poor people, but believed help should be given “in a systematic way,” rather than through “summary handouts and mere distribution.”

“Of course, we need to open our hearts and pockets to the poor, who often knock at the doors of bishops,” he said.

“But we can’t just hand over what belongs to us in an uncontrolled, spontaneous way. Nor are we called to throw away everything and allow the church in Poland to have its patrimony ruined.”

He said the Polish church’s key responsibility was to preserve and “learn ever more deeply” the teachings of St. John Paul.

An international congress will be held in Gniezno March 11-13 to set out the Polish church’s “Christian vision for Europe” and apply the “culture-building power of Christianity” to church-state relations, he added.

“This isn’t a contest,” the archbishop said, “and we aren’t trying to portray ourselves as a better and more believing church, (but) just as people who wish to express a truly evangelical witness in their lives.”