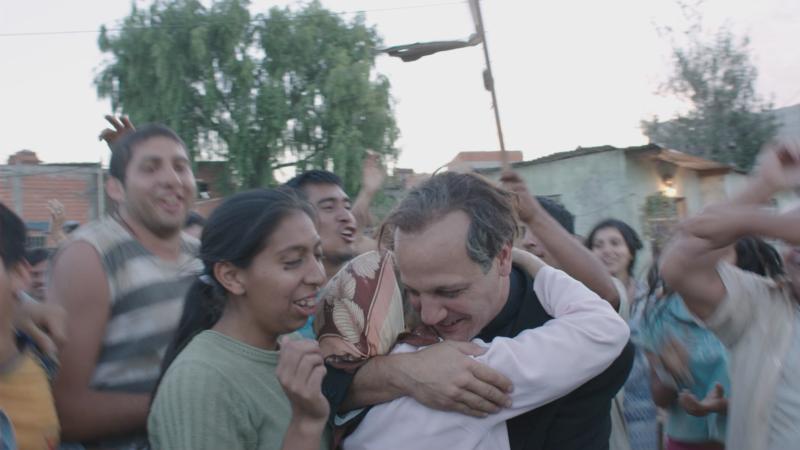 Rodrigo de la Serna stars in a scene from the movie "Call Me Francesco," the first movie based on the life of Pope Francis, shown in the Vatican audience hall Dec. 1. (CNS photo/Angelo Di Pietro, TaodueFilm, distributed by Medusa)

VATICAN CITY (CNS) — The usual fanfare that comes with the world premiere of a movie is pretty standard: the lights and cameras, the celebrities walking down the red carpet and screaming fans trying to catch a glimpse of their favorite actors.

At the Vatican, however, a movie premiere is not your typical star-studded event.

The world premiere of “Call Me Francesco,” the first movie based on the life of Pope Francis, took place in the Vatican audience hall Dec. 1 and those considered celebrities in the eyes of the pope were in attendance.

“To this exceptional premiere, the Holy Father wished to invite the poor, the homeless, refugees and the people most in need, together with the volunteers, religious and lay people, who work daily in charity,” a statement from the papal almoner’s office said.

Parishes and charitable associations in Rome were given 7,000 tickets for the poor to attend the premiere at the Vatican. The night also included a concert featuring the Pontifical Swiss Guard’s musical band. The papal almoner’s office said that many of the Swiss Guards offered to play during their free time as a gift to the homeless.

The poor were also offered a brown-bag dinner “donated especially for the occasion by several benefactors.”

Directed by Italian filmmaker Daniele Luchetti, “Call Me Francesco” details the life of Jorge Mario Bergoglio, from his humble beginnings in Buenos Aires, Argentina, to his election to the papacy in 2013.

At the premiere, Luchetti expressed his hope that the movie would be “an emotional moment” in following “the footsteps of a man we admire.” While all the details of the pope’s life are not known, the Italian director said he was optimistic that the film would explain “how he came to be and for what reasons.”

For Argentine actor Rodrigo de la Serna, portraying the young Jorge Mario Bergoglio on the silver screen was a dream come true. “It’s crazy, I never imagined in my life to be here at the Vatican, much less portraying Jorge Mario Bergoglio. It’s a dream!” de la Serna told Catholic News Service. Seeing how well the movie was received by the 7,000 guests, he said, was “something that I will never forget.”

David, one of the thousands of homeless people attending the premiere said that it was “truly emotional” to the see the path followed by Pope Francis. “His way of being close to the poor, close to people in need and the endless struggle against evil” was particularly moving, he told CNS.

Of the many groups at the premiere, one stood out in the crowd, holding a large colorful banner with the words, “Thank you, Pope Francis!” The banner belonged to a group of refugees from Eritrea who were invited to attend.

A young refugee who wished to remain anonymous told CNS that he was happy to see the film and that the pope’s life showed that prayer can be a powerful solution, even in the most difficult circumstances.

“Some of us will continue to other countries, others will stay here in Italy. We are refugees,” he said. Pope Francis’ story, he continued, gave him hope that “everything will be all right for us.”