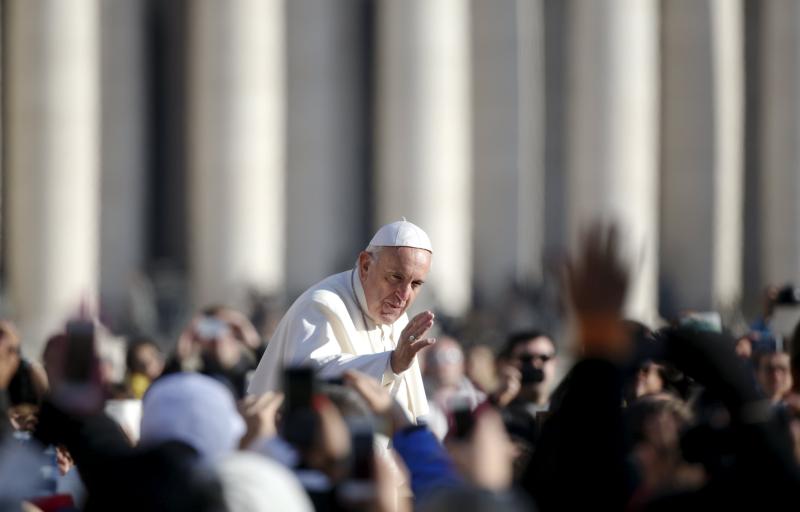 Pope Francis waves as he arrives to lead his weekly audience in St. Peter's Square at the Vatican Dec. 2. (CNS photo/Alessandro Bianchi, Reuters)

VATICAN CITY (CNS) — Missionary spirit is manifested by preaching love, humanity and faith through one’s witness and not through proselytism, Pope Francis said.

Faith in Jesus Christ is shared first through “witness then with words,” the pope said Dec. 2 at his weekly general audience.

The pope dedicated his audience to reflecting on his trip to Africa Nov. 25-30 when he visited Kenya, Uganda and the Central African Republic.

He said that his first stop, Kenya, was a country “that represented the global challenge of our time” in presenting a “model of development” that cares for creation in a “balanced, inclusive and sustainable” way. However, he said, there also is a noticeable situation of “wealth and misery” existing side by side.

“This is a scandal, not only in Africa but also here, everywhere,” the pope said. “Coexistence between wealth and misery is a scandal, a shame for humanity.”

Stressing the need for giving witness to the “natural and spiritual wealth” of the country, the pope remembered the victims of the terrorist attack at Garissa University April 2 where Al-Shabaab militants targeted and executed 148 Christian students.

“Their blood is the seed of peace and brotherhood for Kenya, for Africa and for the whole world,” the pope said.

An example of the fruits of such a witness was reflected in the history of Uganda, the second leg of his trip, where the memory of the 19th-century Catholic and Anglican martyrs is still strong. Pope Francis thanked the catechists, charitable organizations and the youth of the country who “protect the gift of hope and seek to live according to the Gospel and not according to the world; going against the current.”

The pope said that the final stop of his trip, the Central African Republic, took him to “the heart of Africa” and it was the primary reason for his visit given that it “is a country that suffers so much.”

The early opening of the Holy Door at the cathedral of Bangui, he said, was done as “a sign of faith and hope for that people, and symbolically for the whole African population who are most in need of rescue and comfort.”

Pope Francis said that the final Mass at the Bangui stadium was “wonderful” and marveled at the sight of so many young people.

He also expressed his admiration for the work of missionaries in Africa, men and women “who have left everything” for the Gospel. Speaking off-the-cuff, the pope recalled meeting an 81-year-old Italian nun along with a 3-year-old girl who called her “nonna” (“grandma”). Both made a harrowing trip to Bangui for the papal visit via canoe.

The nun, he said, told him that she works as a nurse in the Congo and went on to become an obstetrician, helping to deliver over 3,000 babies.

“That is how missionaries are, they are courageous,” the pope said. “Like this nun there are many, so many nuns, so many priests, and so many religious who ‘burn up’ their lives to announce Jesus Christ. It is beautiful to see this! It is beautiful!”

The pope appealed to all young people, calling on them to reflect on their vocation and “to not exclude the possibility of becoming a missionary” and to preach with their lives, not by proselytizing.

“Those who are looking for something else are the ones that (proselytize),” he said. “Faith is preached first through witness then with words — but slowly.”

NEXT: Homeless, poor get star treatment at Vatican movie premiere