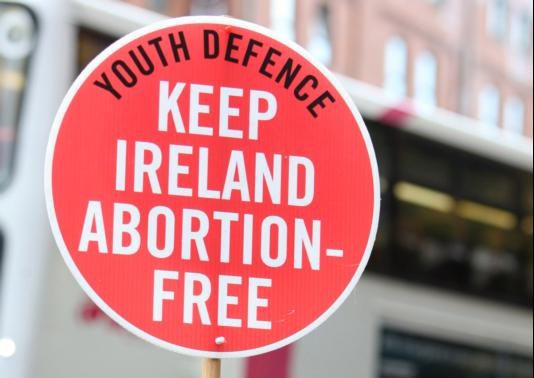 A pro-life supporter demonstrates in 2012 outside the Marie Stopes clinic in Belfast, Northern Ireland. The Catholic bishops of Northern Ireland have described as "profoundly disquieting" a ruling by the High Court that the region's ban on abortion in all but very limited circumstances breaches human rights legislation. (CNS photo/Paul Mcerlane, EPA)

DUBLIN (CNS) — The Catholic bishops of Northern Ireland have described as “profoundly disquieting” a ruling by the High Court that the region’s ban on abortion in all but very limited circumstances breaches human rights legislation.

While Northern Ireland is part of the United Kingdom, the 1967 legalization of abortion only extended to England, Wales and Scotland. Northern Ireland retains the earlier 1861 prohibition on abortion.

Currently, termination of pregnancy in Northern Ireland is allowed only if a woman’s life is at risk or there is a permanent or serious risk to her mental or physical health.

However, the High Court in Belfast, Northern Ireland, ruled Nov. 30 that grounds for abortion should be extended in cases where the child is not expected to live long outside the womb or cases of rape or incest.

Northern Ireland Attorney General John Larkin said he was “profoundly disappointed” by the decision and was “considering the grounds for appeal.” He had six weeks to decide.

Responding to the statement, the bishops said, “It is profoundly disquieting that the decision of the High Court in Belfast has effectively weighed up one life against another and said to our society” that the lives of some children are “more worthy of our protection, love and care than others.”

“Vulnerable and innocent children who suffer from a life-limiting condition, and children who have been conceived as a result of the trauma of a sexual crime for which they bear no responsibility, will no longer be afforded the protection of the law to vindicate their inherent right to life.

“To deliberately and intentionally take the life of an innocent person continues to be gravely morally wrong in all circumstances,” the bishops said.

They said the church is “committed to a culture of equal compassion and care for a mother and her unborn child. We share with others the belief that the direct and intentional killing of an unborn child can never be a humane, compassionate or appropriate response to the complex and sensitive circumstances of a difficult or crisis pregnancy.

“The church will continue to consider the full implications of the judgment of the High Court in Belfast and of any appeal which may follow,” the statement added.

Bernadette Smyth of the pro-life advocacy group Precious Life said, “this is an undemocratic decision today — it will clearly see, long term, the opening of the floodgates.”

The issue is also proving contentious in the neighboring Irish Republic, where a strict ban on abortion was relaxed in 2013 to permit abortion in limited circumstances when there is a substantial risk to the life of the mother, including when a woman says the continuation of the pregnancy leads to suicidal thoughts.

Some in the Irish Republic have called for wider access to abortion. Such a move would require a referendum to repeal an article of the country’s constitution, which guarantees the right to life of the unborn child. Prime Minister Enda Kenny has said that if his government is returned to power after next year’s general election, he will call a citizen’s convention to debate the issue.