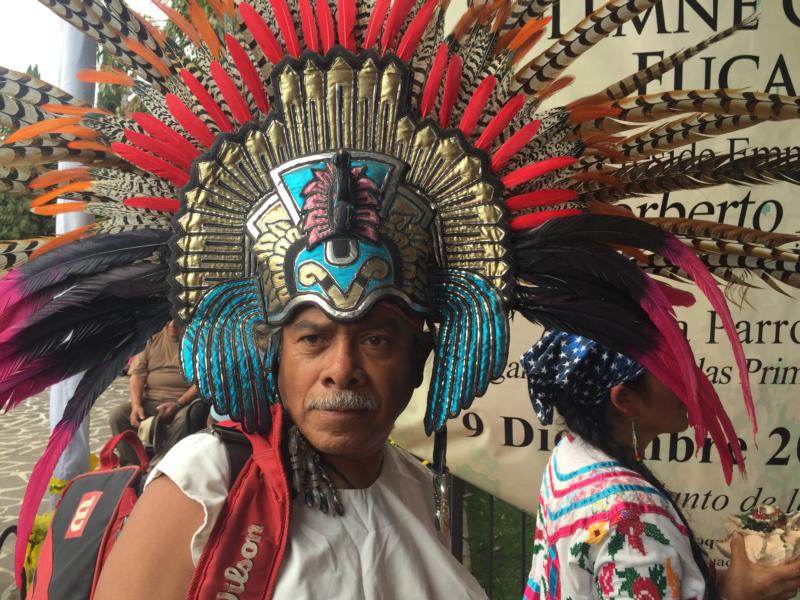 Jose Alfredo Robles, a "conchero" dancer, attends the Dec. 9 feast day for St. Juan Diego at the Basilica of Our Lady of Guadalupe in Mexico City. The indigenous saint has not attracted a large devotion since being canonized in 2002. (CNS photo/David Agren)

MEXICO CITY (CNS) — For the Dec. 9 feast of St. Juan Diego, traditional indigenous dancers known as “concheros” and “chinelos” danced outside the Old Chapel of the Indians on the grounds of the Basilica of Our Lady of Guadalupe.

Mexico City Cardinal Norberto Rivera Carrera celebrated Mass at the site. Some in attendance clutched small St. Juan Diego statues. A few spoke of his importance in evangelizing indigenous populations after Mary appeared before him at Tepeyac Hill — now site of the Basilica of Our Lady of Guadalupe, the world’s most-visited Marian shrine.

“(Guadalupe) chose him,” said Rosario Ledesma, a retired physics professor and conchera dancer, wearing a feather headdress, sandals and rattles wrapped around her legs. “He is important as a servant of the virgin (and) is her intercessor for all Mexicans.”

Ledesma showed an infectious enthusiasm for St. Juan Diego, but it is rare. Even at his feast day festivities, images of Our Lady of Guadalupe were more commonly spotted, and pilgrims poured into the basilica grounds by the thousands — with almost all ignoring the St. Juan Diego celebrations.

In the 13 years since he was made a saint, a sizable devotion has not developed.

Prior to becoming a saint, Juan Diego was revered for playing an invaluable part in a great act of evangelization, which converted many indigenous Mexicans to Catholicism. But his more recent role as a saint has been met with tepid enthusiasm as Mexicans struggle to see the reasons for sainting a secondary figure in the story of Our Lady of Guadalupe, the county’s patroness and a figure whose relevance surpasses the spiritual for many in Mexico and forms an important part of the national identity.

“Juan Diego is nobody without Our Lady of Guadalupe,” said Father Hugo Valdemar Romero, spokesman for the Archdiocese of Mexico City, acknowledging the challenge with perceptions. “You can’t take away this association with Our Lady of Guadalupe from St. Juan Diego. He’s a servant, he’s a mediator, he’s a seer of the virgin.

“People understand their devotion through Our Lady of Guadalupe, not St. Juan Diego.”

Father Valdemar cautioned against reading too much into the tepid enthusiasm — pointing to the stories of St. Bernadette and the three child seers of Fatima, none of whom enjoy especially large devotions, despite playing important parts in recent Catholic history.

“(St. Juan Diego) is something less because the child seers of Fatima were absolutely historic figures. Bernadette is also absolutely historic. There’s a birth certificate, baptism record, relatives,” said Father Olimon, a founding professor of the Pontifical University of Mexico, presently working in the Diocese of Tepic in western Mexico. “Juan Diego is a narration. … (His) history has never been proven.”

Father Olimon wrote a 2001 book, “The search for Juan Diego,” questioning the history of St. Juan Diego’s existence, part of a controversy at the time that included the basilica’s rector expressing similar doubts.

“The canonization was done after resistance to which those in charge … never responded,” Father Olimon said.

St. Juan Diego was beatified by St. John Paul II in 2002, becoming the first indigenous saint from the Americas.

“He facilitated the fruitful meeting of two worlds and became the catalyst for the new Mexican identity, closely united to Our Lady of Guadalupe, whose mestizo face expresses her spiritual motherhood, which embraces all Mexicans,” the then-pope said in his homily at the Basilica of Our Lady of Guadalupe. “Mexico needs its indigenous peoples and these peoples need Mexico.”

Church observers say the circumstances and timing of the canonization created unrealistic expectations.

Mexico is still 83 percent Catholic, but indigenous populations in the country and Central America have been falling away faster from the church than any other ethnic group, said Andrew Chesnut, religious studies professor at Virginia Commonwealth University who studies Catholicism in Latin America.

The canonization could be seen as “a strategy to retain indigenous Catholics,” Chesnut said.

The Zapatista uprising of the mid-1990s in Chiapas also unsettled elites and exposed discontent and underdevelopment in a mostly indigenous state.

Jose Luis Robles, a retired engineer and conchero dancer, agreed with the image issues, saying his troupe never includes the likeness of St. Juan Diego on its costumes.

“We bring the images ourselves,” he said, pointing at his skin.

“He has a beard that is very Spanish,” Robles said, referring to the official images of St. Juan Diego with thick facial hair — not a common characteristic of indigenous Mexicans.

But Ledesma said there were few doubts about St. Juan Diego and his image.

“The image doesn’t matter,” she said. “What’s important is the example he set.”

NEXT: Survival of Christianity in Middle East at critical point due to ongoing persecution