They’ll have a bleak, bleak Christmas in Nepal 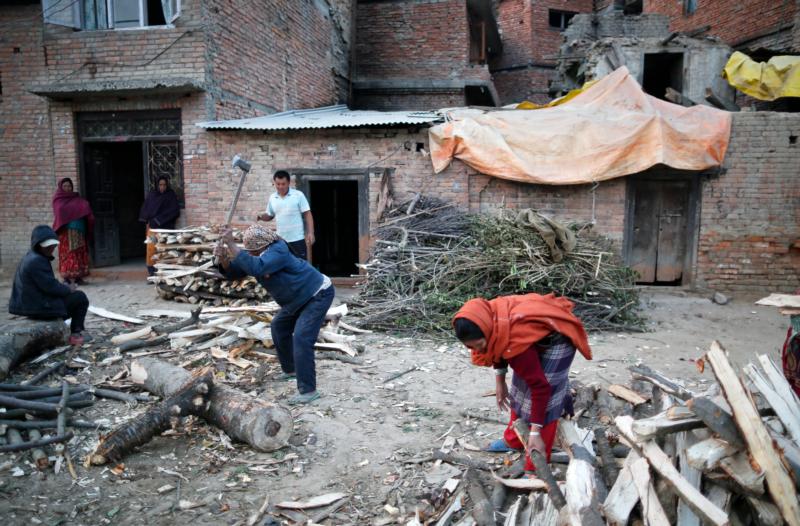 Nepalese who lost their home in the April 25 earthquake chop firewood in Lalitpur Dec. 21. The church in Nepal is preparing for a bleak Christmas as the Himalayan nation passes through one of the worst crisis in its history following the earthquake and an Indian blockade. (CNS photo/Narendra Shrestha, EPA)

THRISSUR, India (CNS) — Catholics in Nepal are preparing for a bleak Christmas because of an economic blockade imposed by neighboring India.

Church officials told Catholic News Service that the Nepalese face a heightened crisis as winter settles in because supplies of fuel for vehicles and cooking gas have dwindled and electricity service has become intermittent.

“The situation here is worse than the (post-) earthquake scenario. It will be a very harsh Christmas for us this year,” Father Pius Perumana, director of Caritas Nepal, said Dec. 22 from Kathmandu, the capital. He was referring to a devastating earthquake in the Asian country in April.

“The economic blockade has crippled life here. We have hardly any electricity, fuel or cooking gas. We are using firewood for cooking,” Father Perumana said.

Father Perumana traced the difficulties to the Sept. 20 adoption of a new Nepalese constitution that declared the former Hindu kingdom as a “secular state,” nine years after the Hindu monarchy was overthrown by a popular uprising.

Soon after, political parties and groups in the Madhesi region bordering India launched a blockade of the key supply routes from India to the Himalayan nation, alleging marginalization of the Madhesi people under the new constitution.

“The general perception here is that the (Hindu nationalist Bharatiya Janata Party-controlled) Indian government is supporting the blockade because Nepal has chosen to be a secular state and not a Hindu state,” Father Perumana said. 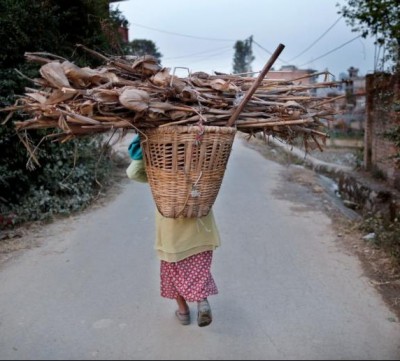 A Nepalese woman carries firewood on her back as she returns home in Lalitpur Dec. 21. (CNS photo/Narendra Shrestha, EPA)

ore than 50 people have died in three months of protests. Vital supplies have been blocked by demonstrators opposed to the new constitution. Nepal Prime Minister Khadga Prasad Oli has blamed India for the blockade.

Despite the distress, Hindu groups that had unsuccessfully campaigned for Nepal being declared a Hindu nation continue to protest in the capital, seeking a change from the government.

Expressing concern over the obstruction of essential supplies, U.N. Secretary-General Ban Ki-moon Nov. 11 urged all sides to lift the blockade at the border, invoking the landlocked country’s right of free transit.

As a result of the “man-made disaster,” Father Perumana said, Nepal has slipped into a “horrible situation” with acute shortage of essential items, including medicine and food.

“The relief work had been hit badly. When there is no fuel, regular transport or commodities available, what can you do?” the priest said of the blockade’s effect on relief work for the victims of the earthquake that left more than 8,000 dead and more than 1 million homeless.

“Many of the charities have scaled down the relief work due to the lack of supplies and logistical problems. Sadly, the victims of are made to suffer again,” Father Perumana told CNS.

Chirendra Satyal, spokesman for the Catholic vicariate of Nepal, confirmed that the situation is “worse than after the earthquake.”

“This Christmas will be a very bleak one,” he said. “Normally, we have lot of stars and illuminations but not this year. The electricity supply is very erratic due to break downs.”

Satyal estimated that Mass attendance has declined by two-thirds because of the lack of fuel.

“More importantly people are dying even in hospitals due to lack of oxygen and medicines. Prices of every item have gone up several times. Taxis charge five times (the normal rate). Cooking gas costs still more,” Satyal said.

He narrated a litany of woes facing the Nepalese: People travel precariously atop crowded buses, banks are open for a few hours a day and staff in government offices rotate working shifts, slowing the response to constituent needs.

Religions for Peace Nepal, the country’s largest interreligious organization, received U.N. funding for its relief and development work, but has been unable to access the money through a local bank because of the crisis, Satyal said.

“Our (earthquake) rehabilitation and reconstruction work is held up badly as the cost of commodities has gone up by leap and bounds,” Father John said.

“We are not able to visit our area of operations due to the shortage of fuel,” he added. “The most affected are the people in remote areas where they are still living in tents and fighting with the cold winter.”

The blockade has forced the government to divert funding from relief work, acknowledged Prakash Khadka, a Catholic social worker and member of Pax Romana, the international Catholic movement for intellectual and cultural affairs.

“(The) fuel shortage and black market has brought movement of relief agencies to a halt,” he told CNS in an email.

“The common sight on the roads was of men, women and children carrying bundles of firewood,” Khadka said. “Selling firewood to the families and restaurants in those towns is new income for these people.”

PREVIOUS: As doctor of the church, pope prescribes strong medicine

NEXT: Pope to Vatican employees: Take care of your marriage, grandparents