As doctor of the church, pope prescribes strong medicine 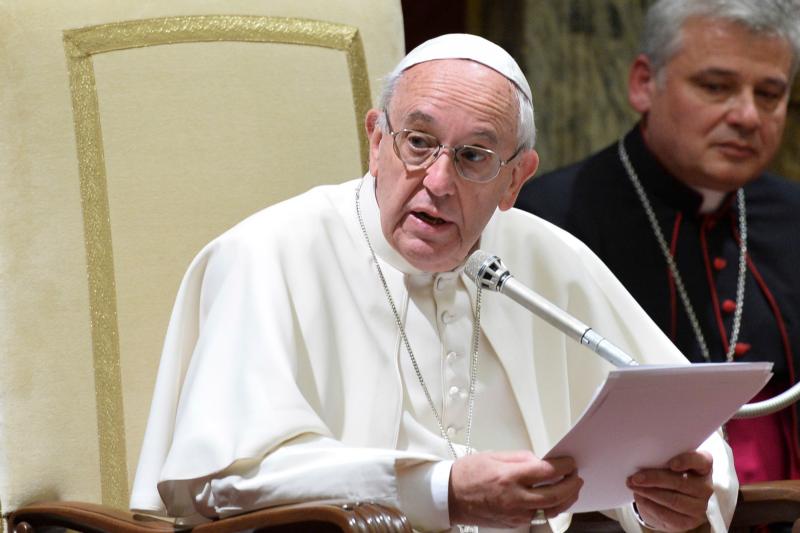 Pope Francis speaks during the traditional greetings to the Roman Curia in the Clementine Hall of the Apostolic Palace at the Vatican Dec. 21. (CNS photo/Alberto Pizzoli, pool via Reuters)

VATICAN CITY (CNS) — If Pope Francis sees the church as a field hospital after battle, then his annual Christmas address to the Roman Curia often looks like the triage tent, with him holding the charts.

Instead of a typical gathering to exchange just thanks and best wishes, Pope Francis uses this year-end moment with cardinals and top officials to offer “fraternal correction,” spiritual direction and his clear expectation of their role as servants, not masters, of the church.

After diagnosing last year what was ailing the Vatican, this year he prescribed a strong dose of medicine — a long list of “antibiotics” or virtues — to fight the disease of bad leadership.

In Pope Francis’ first Christmas speech in 2013 to cardinals in Rome and heads of Vatican offices, he extolled the qualities they should possess, pointing to the figure of St. Joseph as the model to live up to. Holiness, quiet professionalism and a spirit of humble service were the main job requirements, he said.

In 2014 — and well into the start of the reform of church governance — the pope took it up a notch, going from good role models to red-flag warnings.

Choosing clarity and color over vague politeness, that year the pope listed 15 “illnesses” the curia is often prone to, such as “spiritual Alzheimer’s,” “existential schizophrenia,” “hypocrisy typical of the mediocre,” the “terrorism of gossip” and even a poor sense of humor.

The pope showed his own sense of humor this year when presenting his new verbiose list of virtues, like “innocuity” and a rare Italian term for “plethora.”

“My vice is neologisms,” he admitted.

Diseases need “prevention, vigilance, care, and sadly, in some cases, painful and prolonged interventions,” he said in this year’s talk Dec. 21.

The spiritual problems he highlighted last year are still lingering, he said, and were “evident in the course of the past year, causing no small pain” to the whole body of the church and “harming many souls, with scandal, too,” he said in his 30-minute talk.

Treatment is necessary and the regimen entails getting back to basics, he said, for which he offered a “catalogue of needed virtues.”

This constant examination of what Christ demands of his disciples always will be necessary, he said. “The reform will move forward with determination, clarity and firm resolve,” since the church is always to be reformed, he said.

The papal catalogue was actually an acrostic, a list in which the first letter of each word spells out another word. In this case the word was “misericordia,” Italian for mercy. In an aside explaining his poetic format, he told his learned audience that Jesuit Father Matteo Ricci used to do acrostics when he evangelized in China.

Mercy, the pope explained, isn’t some “fleeting sentiment.” It’s the core teaching of the Gospel, the living “heart of Jesus” and, therefore, the light that needs to guide one’s life, reforms and decisions.

“May it be the basis of all our efforts. May it teach us when to move forward and when to step back. May it also enable us to understand the littleness of all that we do in God’s greater plan of salvation and majestic and mysterious working,” the pope said.

The list of 24 virtues, listed as one dozen pairs, reiterate the pope’s approach since the start of his pontificate: honesty, humility, open doors, trust in God and others as well as his Jesuit focus on mission, community and discipline.

The “practical guide” of essential virtues to cultivate, the pope said, includes being or having:

— Missionary and pastoral spirit: Show the joy and your belief in the Gospel with your lives and work.

— Appropriate and wise: Work hard, be creative and smart to get good at what you do; don’t rely on “connections” and “bribes” to get ahead or face situations.

— Spiritual and human: Let the Spirit protect you from human frailty, but don’t become a “robot.” If you can no longer laugh or cry with sincerity, “we have begun our decline.” Show tenderness, kindness and courtesy to everyone.

— A good model and faithful: Avoid scandals that harm souls and hurt the church’s credibility. “Woe to the world because of things that cause sin.”

— Reasonable and gentle: Avoid being too bureaucratic or too lenient. Find balance between rationality and kindness.

— Harmless and determined: Don’t be hasty or impulsive; be cautious in your judgments; act carefully, but with determination, clear vision, obedience to God and for the spiritual welfare of the faithful.

— Charitable and truthful: Speak the truth with charity and practice charity in truth, otherwise charity without truth is “a destructive ideology” of do-goodism and “truth without charity becomes blind legalism.”

— Open, honest and mature: Don’t be good only when you know people are watching. Don’t lord over people, never deceive. “Honesty is the foundation on which all other qualities rest.”

— Respectful and humble: Show respect to everyone as well as for documents, dossiers, confidentiality and privacy. Listen carefully, speak politely. You are and can do nothing without God and his grace.

— Generous and stand guard: What good is it to open all the Holy Doors around the world if our hearts, homes and hands are closed to others? Do your best and never let your guard down with vices and weaknesses.

— Fearless and ready: Be proactive; face troubles boldly with determination and resolve. Don’t get bogged down by ambition and material things; be ready and free to pick up and go where God calls.

The pope ended his call with a prayer recited by the late-U.S. Cardinal John Dearden, who was influential in drawing up and implementing the teachings of the Second Vatican Council.

The long prayer seeks to console and encourage the perhaps lonely and tired laborer in the Lord’s enormous vineyard, planting “seeds that one day will grow.”

“We cannot do everything, yet it is liberating to begin,” the pope read. “It may remain incomplete,” he said, but it is a step along the way — another sign the pope, the doctor of souls, knows the journey of reform has another checkup scheduled next year.

NEXT: They’ll have a bleak, bleak Christmas in Nepal