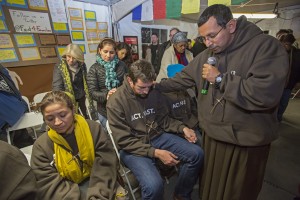 Franciscan Brother Juan Turios of Action Network prays in 2013 with immigration reform advocates in Washington. To help appreciate and better promote the vocation of religious brothers, the Vatican released a 50-page reflection on the importance of their life and mission of evangelization, fraternity and sacrifice. (CNS photo/Jim West)

VATICAN CITY (CNS) — To help appreciate and better promote the vocation of religious brothers, the Vatican released a 50-page reflection on the importance of their life and mission of evangelization, fraternity and sacrifice.

The Congregation for Institutes of Consecrated Life and Societies of Apostolic Life released “Identity and Mission of the Religious Brother in the Church” in five languages Dec. 14 as a guide for the whole Church.

Pope Benedict XVI asked the congregation in 2008 to draft an instruction in order to underline the importance of the vocation of lay brothers, especially given “the challenges they must face” in today’s world, said Archbishop Jose Rodriguez Carballo, secretary of the congregation. He spoke at a Vatican news conference presenting the document Dec. 14.

At the time, the former prefect of the congregation, Cardinal Franc Rode, had said the steep decline in the numbers of religious brothers was a clear sign “something must be done.”

“We think one of the reasons for the decline in these vocations is due to a certain lack of attention on the part of the church” to brothers, who are mentioned only in passing in the documents of the Second Vatican Council and Vatican documents published later, he told Vatican Radio in 2010.

While the numbers of religious in every category have dropped in the past 50 years, the number of religious brothers decreased most drastically. For example, the Christian Brothers had 16,000 members in 1965 and have fewer than 5,000 today.

The number of religious brothers around the world totaled more than 55,250 at the end of 2013, according to recent Vatican statistics. However, the total number of priests — diocesan and religious order — around the world was nearly 415,350, with a steady increase in diocesan priests in Africa, Asia and the Americas, and a continued decline in Europe.

Archbishop Rodriguez said the document is meant to highlight “the richness and necessity of all the vocations in the church, especially the vocation of lay religious life for men and women.”

He said it was hoped the reflection would help all members of the church become more aware and better appreciate the service and gifts of religious brothers, and help encourage and guide them in living their vocation “with authenticity and joy.”

The instruction underlines the importance of serving like the Good Shepherd in order to make Christ present in the world and to enlighten, bless, raise up, heal and free humanity.

So many people are experiencing a “thirst for spirituality,” it said, and religious brothers, especially those living in monastic or contemplative communities, should offer themselves as guides for those seeking deeper meaning, inviting people to prayer, reading Scripture and bridging faith and culture.

The text urged religious brothers to see no human situation as “alien” to their presence. Whether they engage in manual labor, defend human rights, teach, work in health care or serve in other ways, religious brothers must accept God’s invitation to go to the world’s peripheries and lead people to salvation.

“Today more than ever, the world needs consecrated persons who, from the heart of secular realities and of human life itself, bear witness to knowing and loving the God of life.”

The document said religious brothers can be the “prophets for our time” which is witnessing “great social change.”

The document called for improving relationships and a sense of “equal dignity” in so-called “mixed” religious institutes whose members include lay brothers and religious priests. It said priests and the church hierarchy should promote and better appreciate the vocation of lay brothers and sisters, ensuring they can “participate actively in the organs of consultation, decision-making and implementation within the local church.”

Archbishop Rodriguez said his congregation will ask Pope Francis to establish an ad hoc commission to look into the role of religious brothers in mixed or clerical institutes and their “participation in local, provincial and general governance” and administration.

NEXT: Online course helps bridge the gap between science and faith