Online course helps bridge the gap between science and faith 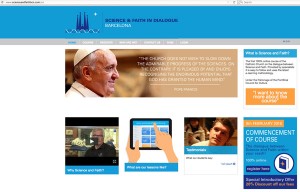 An online course about science and religion is now available in English from the Theological Faculty of Catalonia in Barcelona, Spain. The course, “Science and Faith in Dialogue,” will be available starting Feb. 9, 2016. This is a screen capture of the course website. (CNS)

VATICAN CITY (CNS) — Creationism vs. evolution, scientific method vs. ethics, science vs. faith, the Church’s censure and rehabilitation of Galileo Galilei. For centuries, there have been countless confusion and arguments pitting science against faith as if they were two opposing forces.

In the hopes of dispelling lingering myths and misunderstandings, one ecclesiastical institute has launched a unique online course explaining the compatible roles religion and science play in seeking meaning and knowledge in today’s world.

Sponsored by the Pontifical Council for Culture, the “Science and Faith in Dialogue” program is run by the Theological Faculty of Catalonia in Barcelona, Spain, and it seeks to bridge the gap between science and faith through education.

The course was offered in Spanish in October 2013 and has had 750 students take part worldwide, including 256 from Latin America.

Because of the course’s success, the theological institute of Catalonia is now launching the course in English starting Feb. 9, 2016.

Each class begins an introductory video on the day’s lesson, narrated by Father Emili Marles Romeu, director of the “Science & Faith in Dialogue” program. In a style much like the U.S. science documentary series “Cosmos: A Spacetime Odyssey,” the priest explains complex historical and scientific discoveries with relative ease. The lesson plans also include texts, summaries, tests and assignments. Students can also opt to be assigned specialized tutors who assist them throughout the course.

The course offers discounted courses to countries in Latin America with students paying a minimum of 20 euros for the entire 12 lesson course. Through grant and financial assistance, 25 percent of the students enrolled were able to study at no cost.

Father Marles told Catholic News Service that the low price and grants allow for the course “to be accessible to everyone regardless of location or financial situation.” He and others presented the program at a news conference Dec. 10 at the Pontifical Council for Culture.

The lesson plans cover an array of scientific studies, including the debate between creationism and evolution and stem cell research. While the course is offered to everyone, Father Marles said that it is directed especially to those with an educational role in the Church.

Father Armand Puig i Tarrech, dean of the Theological Faculty of Catalonia, said the course is a service that helps students and those who work in the field of Catholic education and catechism address the misconception that “the Bible and human reason are opposed to each other.”

The course shows that countless scientific achievements have been achieved by Catholics dedicated to their faith like Galileo, the father of observational astronomy and modern physics, and Msgr. Georges Lemaitre, the Belgian priest and astronomer who proposed the Big Bang theory.

Although faith needs reason in order to be more grounded in the world, Father Puig said that science must also recognize its limits. “This course helps to bridge the world of science with human and divine realities,” he said.

People can access a trial course, further information and registration details at www.scienceandfaithbcn.com/en.