Cardinal Dolan: Newborn in manger a positive sign of a culture of life 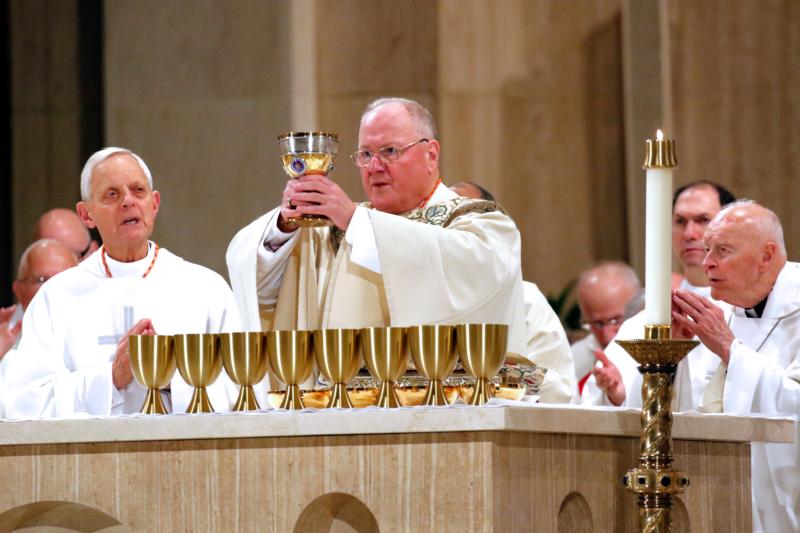 New York Cardinal Timothy M. Dolan, chairman of the U.S. bishops' Committee on Pro-Life Activities, celebrates the opening Mass of the National Prayer Vigil for Life at the Basilica of the National Shrine of the Immaculate Conception in Washington Jan. 21.(CNS photo/Gregory A. Shemitz) 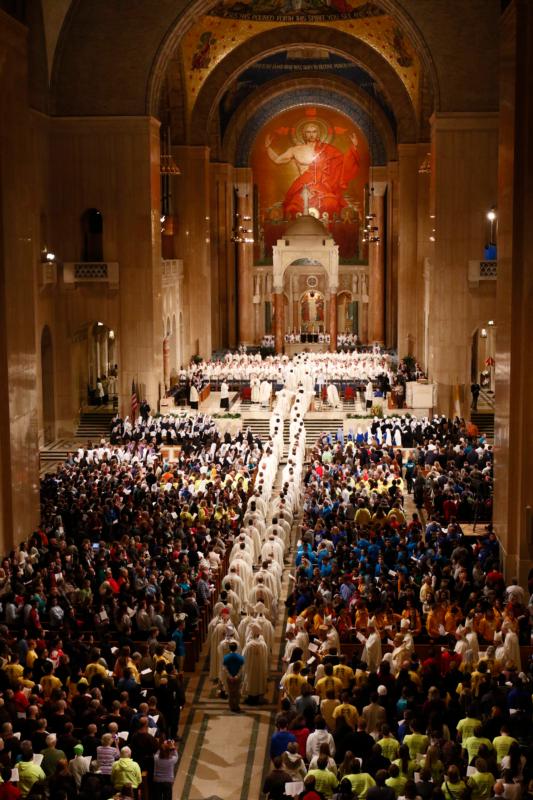 Clergy process at the beginning of the opening Mass of the National Prayer Vigil for Life at the Basilica of the National Shrine of the Immaculate Conception in Washington Jan. 21. The all-night vigil is held before the annual March for Life, which this year marked the 43rd anniversary of the Supreme Court’s Roe v. Wade decision that legalized abortion across the nation. (CNS photo/Gregory A. Shemitz)

WASHINGTON (CNS) — A baby in a manger is proof enough for Cardinal Timothy M. Dolan of New York that Americans can express a culture of life.

And it wasn’t the Christ child. Instead, it was a newborn infant left by his mother in the crib of a manger scene at a parish in the New York City borough of Queens.

Calling it “a sad but gripping tale” in his homily during the opening Mass Jan. 21 of the National Prayer Vigil for Life at the Basilica of the National Shrine of the Immaculate Conception in Washington, Cardinal Dolan, said, “No one knew where the baby had come from, or who left him there … until, a week later, the sobbing mother, a young Mexican woman, remaining anonymous, told her story to a journalist.”

Cardinal Dolan, who is chairman of the U.S. bishops’ pro-life committee, recounted the mother’s words, noting the irony that the woman had left her baby at Holy Child Jesus Church:

“I was so afraid, and, all alone in the house, suddenly went into labor. I must have been in excruciating pain for at least two hours. I started pushing because, each time I did, the pain would let up. I pushed for 15 minutes and finally the baby, a boy, finally came out. He didn’t cry at first, so I was afraid he was not all right. I didn’t know what to do, so I left the umbilical cord on. I wrapped him in a clean towel and started to look for some place safe and warm.

“I’m very religious,” the woman had continued, “so right away I thought of my church, Holy Child Jesus (in the Brooklyn Diocese). I go there a lot, and the priests and people are so good. I just knew if I left him in God’s hands, my baby would be OK. So, I ran into my church and put him in the empty crib. Then he started crying. I just hoped he was warm enough. I hid in the back of church, knowing Father would find my baby and the people would care for him. They did.”

“True story,” Cardinal Dolan said, “and I submit it to you, the jury, this evening, as Exhibit A in our case for promoting the culture of life.”

He added, “It’s not far-fetched to imagine another scenario, what might have happened: that mother’s legitimate and understandable apprehension and isolation could have led her to Planned Parenthood.

“She could have been going to a parish which she found cold, unwelcoming and, impersonal, where she did not feel safe, and where she would not have been inclined to turn in her crisis,” Cardinal Dolan said. “Or, in those fretful minutes after her baby’s birth, she might have run to a church only to find it bolted-up, with a sign on the outside telling her, probably in English, to come back during office hours. Thank God that scenario remains only a ‘might-have-been.'”

He said later, “We are summoned to be such agents of conversion.” The way to do that, Cardinal Dolan said, was “by imitating those priests and people of Holy Child Jesus Parish in New York City, by acknowledging that Jose, that abandoned newborn baby (named for St. Joseph, Jesus’ foster father), Jose was nowhere more at home than in the empty manger of their parish nativity scene, because he, too, is a child of God.” 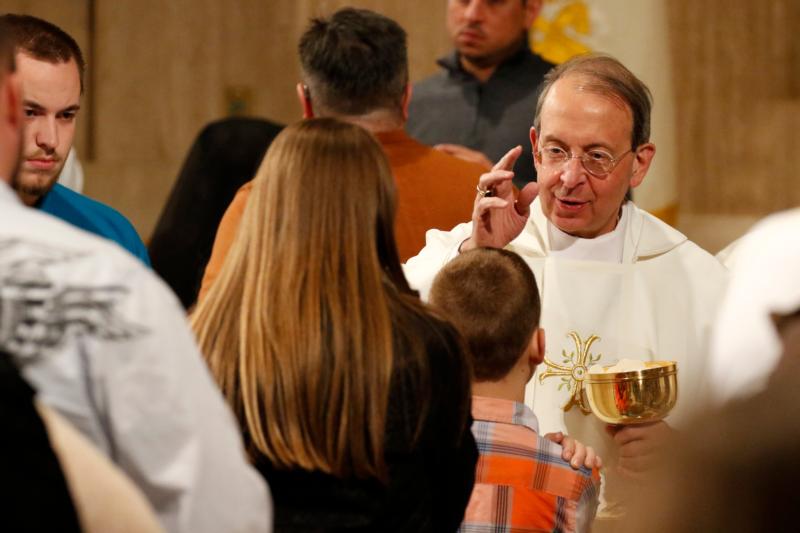 Baltimore Archbishop William E. Lori blesses a boy while distributing Communion during the opening Mass of the National Prayer Vigil for Life at the Basilica of the National Shrine of the Immaculate Conception in Washington Jan. 21.(CNS photo/Gregory A. Shemitz)

Cardinal Donald W. Wuerl of Washington, in introductory remarks, welcomed “the many, many, many young people” at the Mass, as they serve as “a reminder for every generation” that all are “called to show respect for the gospel of life.”

The prospect of a major storm carrying heavy snow and high winds made the national shrine slightly less impossibly crowded. Compared to the 11,000 who were packed in for the opening mass of the National Prayer Vigil for Life last year, only 9,000 were on hand Jan. 21, according to Jacquelyn Hayes, a shrine spokeswoman.

Clergy turnout was similarly smaller for the Mass. Unlike the entrance processions in recent years, which lasted a half-hour, the Jan. 21 procession took 20 minutes.

One indication of a reduced turnout for the vigil was an announcement Jan. 19 by the Archdiocese of St. Louis’ Catholic Youth Apostolate that as a precaution, it was canceling its annual Generation Life bus caravan that would have sent hundreds of youths to Washington.

PREVIOUS: Bishop Zubik calls for pro-lifers to ‘connect the dots’ on life issues