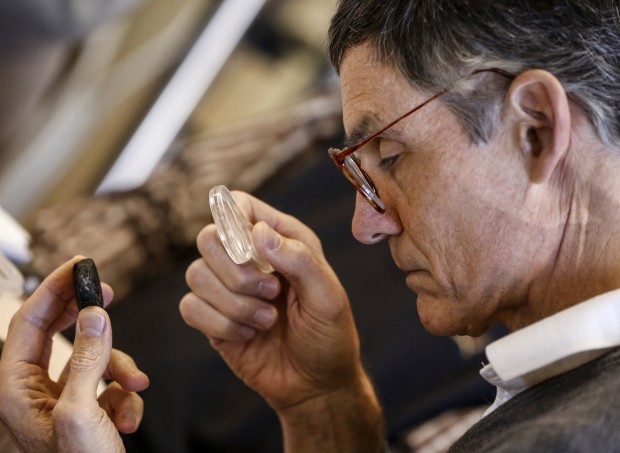 Jesuit Father Justin Whittington of Wernersville, Pa., gets an up-close looks at a meteorite during the Vatican Faith and Astronomy Workshop held in Tucson, Arizona in January. (CNS photo/Nancy Wiechec)

TUCSON, Ariz. (CNS) — Every time Jesuit Brother Guy Consolmagno looks through a telescope at a deep sky object or examines a piece of a 4-billion-year-old meteorite that found its way to Earth, he says he’s exploring a mystery that spans both science and faith.

Not that the Detroit-born director of the Vatican Observatory is expecting to find each and every answer during his inquiries as one of the world’s foremost meteorite scientists, but he finds that his discoveries lead him to continue asking questions that bring him closer to God.

“The idea of entering into the mystery and dwelling with it is what Christianity is, presents a hard thing to sell to people who are looking for the hard and simple answer. There is no hard and simple answer,” he told a group of 25 people gathered for the Vatican Observatory’s second Faith and Astronomy Workshop Jan. 11-15.

The mystery that is God and the related questions about creation, like why and how life exists, and the origins of the universe were among the topics addressed during the workshop at the Redemptorist Renewal Center in the Arizona desert.

The participants themselves were not necessarily seeking full answers but were looking for ways to help the children and adults with whom they minister ask questions that allow them to enter into the mysteries and uncertainty that both faith and science entail.

“We shut out science in our faith tradition,” said Sabrina DiMatteo, a youth minister from Laval, Quebec. “This (younger) generation isn’t realizing there is a science connection with our faith.”

The idea for such a workshop surfaced in the mind of Father James Kurzynski, pastor of St. Joseph Parish in Menomonie, Wisconsin, and a contributor to the Vatican Observatory’s Catholic Astronomer blog (www.vofoundation.org/blog). He first suggested a gathering of church ministers to explore the intersection of faith and science to Brother Consolmagno, who had been exploring ways to bring the two seemingly diverse fields together. 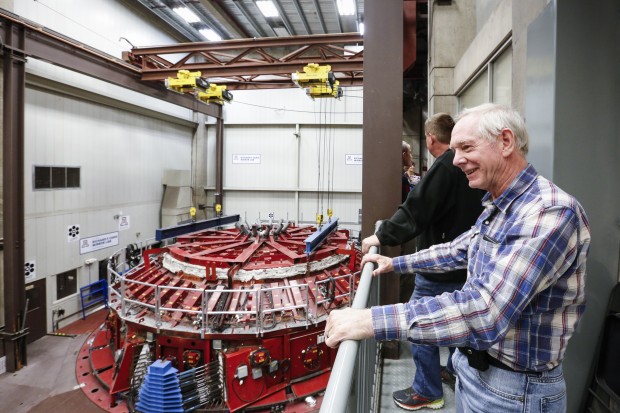 Jesuit Father Chris Corbally, an astronomer with the Vatican Observatory, looks over the rotating furnace at the Richard F. Caris Mirror Lab during a tour by participants in the observatory’s Faith and Astronomy Workshop Jan. 13 in Tucson, Arizona. The lab at the University of Arizona manufactures mirrors for some of the world’s most advanced telescopes. (CNS photo/Nancy Wiechec)

The first two sessions have been popular with participants, some of whom expressed concern that they have had to overcome “Catholic fundamentalism” and its deep suspicion of science.

Such views may be fueled, Brother Consolmagno said, by cable television shows that, in the pursuit of ratings, often portray people of faith as naive and unknowledgable about the modern world. He said such shows have treated religion so derisively that the Vatican Observatory staff routinely declines requests to appear on them.

Workshop participants said they found nothing to fear about science, however.

Lauren Bordelon, 26, a religion teacher at Mount Carmel Academy in New Orleans, has used the material in the blog to help her students “receive” the universe as a gift from God. She told Catholic News Service she welcomes the integration of science and religion in her classes and hopes to see a wider connection in subjects such as anthropology, history and physics across the school’s curriculum.

The idea is to help students “come to the answers on their own” rather than have it presented to them without discussion, she said.

It’s that type of integration that Brother Consolmagno hoped would come out of the workshop.

To help participants better understand the intersection of faith and science themselves, the workshop incorporated a mix of activities and time for reflection. Each day opened with a faith sharing and discussion period that explored Catholic theology as well. The day continued with presentations from professional astronomers on current research and new discoveries.

There also were evening and early morning telescopic observing, hands-on experiences, such as an hour spent learning — and studying — meteorites, and field trips to well-known astronomical sites in and near Tucson such as the Kitt Peak National Observatory and the Lunar and Planetary Lab Imaging Center and the Richard F. Caris Mirror Lab, both at the University of Arizona.

“For 125 years we have been doing the true science (at the Vatican Observatory), but I don’t think we have been doing that well in showing the world,” Brother Consolmagno told CNS. “We need to be doing something that’s more systematic, especially in the Catholic world, which doesn’t know were not supposed to be evangelical creationists. There are people who don’t know what our own theology is. They don’t know what our own traditions are.

Workshop participants comfortably discussed the big-bang theory, space missions to distant planets, the origins of asteroids and their own experiences observing deep sky objects. To a certain extent, they came together in a supportive community, knowing that they are not outliers in their local communities.

Some of the participants said they have been engaged in outreach through occasional telescope nights, parish and school presentations and connecting Bible study with recent astronomical discoveries. For them, they start from the perspective that God exists and that each new discovery reveals a facet of the mystery that is God.

“In life if you come open minded very much like your faith, that’s when you start to learn things and that’s when you can appreciate God and let him come into your heart,” said Bianca Acosta, 25, who teaches science to seventh and eighth graders at Immaculate Conception School in Miami. “It’s the same thing with science, if you’re open to it and ask questions, because it’s never going to be a concrete thing.”

It’s that type of thinking that encourages Brother Consolmagno and his Vatican Observatory colleagues who joined the workshop at times.

“An awful lot of what we do is simply to reassure the other scientific religious types out there that they’re not alone,” he said, “that there’s lots of us, that independently we’ve all come to the same conclusions and therefore, we’re either all crazy in the same way or maybe God is leading us to this truth.”

PREVIOUS: Priests find comfort that in studying the universe, they come closer to God